I think I’m getting old and starting to fall apart.

For the last year I’ve had this Eustachian tube dysfunction that causes me to hear myself really loud in my left ear. If I’m talking, all I hear is me. When it’s really bad, I can hear my heartbeat or my breathing. Walking around would cause a thump-thump-thump sound with every step.

I ran through five days of prednisone and cipro, then 10 days, with no luck. After a 25-day-run of prednisone, I ended up going in on Monday and gettinga tympanostomy tubein my ear.

When they do it, you lay on your side and they drop some anesthetic in your ear. You lay there for a while letting that soak in, then they pop your eardrum and put the tube in. The tube itself is about the size of a pencil lead. It didn’t hurt going in, but there is still some occasional soreness a couple of days later if I yawn really big or bend over such that the blood rushes to my head.

I still hear myself a little, but in general that whole side of my head feels clearer. I’m waiting for a few days before I test to see if I can clear it.

That same day I noticed the left half of my tongue had gone numb. I let it go for a day, but it was still numb, and that freaked me out a bit, so I called the doctor’s office.

When they puncture your eardrum, some of the anesthetic runs through your Eustachian tube into other areas of your head. Apparently some hit my tongue just right (though I didn’t taste anything) and numbed me up. Today, two days later, I’m better… but that lasts a really long time. What was most freaky was that I could feel things on my tongue, I just couldn’t taste, like half of my taste buds had just died. I’m guessing some nerve got hit or something.

I also got some new glasses because Phoenix got ahold of my old ones and decided to rip the arm off. Since my prescription had expired, I had to get a new one. Upon getting my new glasses, I noticed everything looked like I was looking out a slight fish-eye lens – straight lines weren’t straight anymore. Looking at, say, a brick wall was really trippy because the whole thing looked curved. I tried them for a week and took them back.

The optician said I wasn’t adapting to the lens material, so I went from polycarbonate lenses to some other higher-density material. Same thing – weird curvy vision. Again, I tried for a week and never adapted, so I fell back to plastic lenses. (I did inquire as to whether something in my new prescription might be causing this but I was assured it was the lens material.)

I’m wearing the plastic lenses right now and still seeing curvy. Keeping in mind it takes about a week to get my glasses fixed up every time I take them back, we’re going on well over a month now since I first tried to get new glasses. I’ll give these two weeks before taking them back, but right now I hate these stupid glasses with every fiber of my being. I hate that nothing looks right. I really just want my old glasses with my old prescription even if I wasn’t seeing 20/20.

So that’s three of my five senses that have gone out on me recently and I have to say, it’s stressing me out.

I won’t even get into the pressure cooker work has become, or my lack of time to do anything at home, or the bathroom caulk I’ve replaced twice now because I can’t get it to set.

I’m working on building a bunch of projects that all follow a specific convention for naming, NuGet packaging, and so on. As part of that, I want to run the build for each component – from clean to package – all at once rather than clean everything, then build everything, then package everything. (For the sake of the article, let’s ignore whether that’s a good idea or not and just stick with me.)

MSBuild has batching, which sort of works like “for-each,” but in examples you see you can really only “batch” on tasks. Targets (groups of tasks) allow you to specify inputs and outputs, but the “outputs” list is assumed to be files, so if it finds the outputs are up to date, it won’t run that input.

Anyway, I found this article that explains how to sort of abuse the inputs and outputs on targets so you can effectively do for-each over a target.

First, create an item list with your inputs and metadata. It doesn’t have to be files. For your inputs, pass the list of parameters. For the outputs, put a dummy value that always evaluates to empty/null – that way it’s never seen as up to date and will always run.

The output, as you’ll see, is that the “Parameterized” target gets called once for each item in the group. 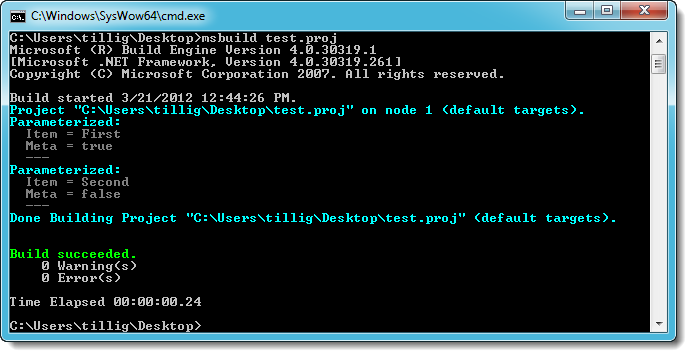 A Typical Play Session with my Toddler

My 15-month-old daughter, Phoenix, is a kick in the pants. This kid has got more energy in her than I can keep up with. Of course, when she gets home from day care, she runs rampant and really wants to play, so we do.

That’s not quite how it goes at our house. Phoenix is into Sesame Street, so we do have the Sesame Street Neighborhood Playset and figures, but she’s also into Little People, so Daddy ended up getting some figures that he could better relate to… like Batman and Joker. 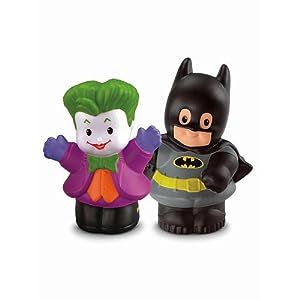 We’ve also got some Little People vehicles, like the school bus. That means a play session goes more like this for us:

Travis: Yes, that’s Batman! Great! I’ll play Joker, because Daddy is always the bad guy anyway. Here’s Joker, he’s getting into the bus with this little kid. Do you see how Joker is in the bus? Now Joker has a hostage. Hostage starts with ‘H’ – can you say ‘hostage?’”

Phoenix: <dancing the Batman figure around on the floor> BAPMO! BAPMO!

Travis: Right, Batman has to come stop the Joker. Joker is going to drive the bus away from Batman. Vroom! Vroom!

Travis: Perfect! Now Batman’s going to try to stop Joker… but the Joker has a secret weapon. The shark! Watch out, the shark is going to get you!

At this point, I grab this giant stuffed shark we bought at Ikea for $15. It’s the best $15 I’ve ever spent. Phoenix wrestles this shark and screams and runs and then comes back to wrestle it some more. I attack her with the shark, and she screams and giggles. 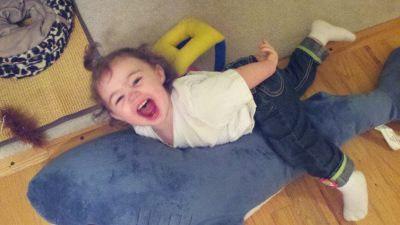 Jenn: I don’t know, have you looked in the toy box?

Travis: Well, crap. How am I supposed to set up the Hall of Justice in Hooper’s Store if I can’t find Wonder Woman?

…and so on. I’m not sure if that’s typical of everyone or if it’s just me. I’m thinking it’s just me. (Phoenix also accompanies me on occasion to the local Things From Another World comic store. Gotta start her early.)

Isolator v7 is Out, and It's Awesome

Typemock has released Isolator v7, and this is pretty much the release you’ve been waiting for.

Let’s ignore the visual test coverage, the test autocompletion, or even the automated test runner that runs your tests in the background so you instantly know when you write something that breaks a test. That stuff all rocks and you’ll love it.

This is the version that lets you run tests against different versions of Isolator without having to uninstall/reinstall different versions. A long-running issue, you’ve previously always had to build your tests and run your tests against the exact same version of Isolator. Not a huge deal if it was a product you could check in alongside your code… but you have to install it and you can only have one version installed at a time. No longer! They’ve finally fixed my #1 complaint and I am stoked.

Oh, and they added mocking for the filesystem (System.IO.File) and environment (System.Environment). Nice.

Go check it out.

Convert Any Set of Headphones to Bluetooth/Wireless

When I’m at work I like listening to music… but I hate being tethered to my computer (or iPod dock, or whatever) by the headphone cord. If I want to slide my chair over to the whiteboard to write something up or reach over and get something out of my bag, I have one of two choices: make the cord so long that it gets tangled up on my chair and in my desk stuff; or take the headphones off to go do whatever it is and put them back on.

Before I explain this, let the audiophiles be warned: This doesn’t yield super-awesome quality. But then again, I’m not sure I’d call music-over-Bluetooth on any level “super-awesome.” Just be aware.

First, get a Bluetooth audio dongle receiver like the TaoTronics BTI-005. That’s the one I got and it seems to work pretty well. This runs between $20 and $30 at the time of this writing. There are a few of these dongles out there, but on Amazon right now this one is the most popular and is one of the few that doesn’t also require you to plug it in.

The audio receiver allows you to plug your existing headphones in and it will receive any audio played over Bluetooth through those headphones. You just converted your headphones to Bluetooth. 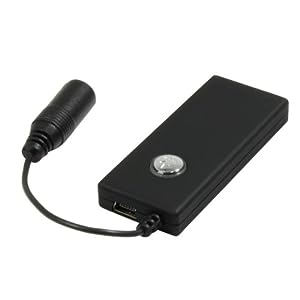 The thing is, you may or may not be done.

If your audio source (iPod, etc.) supports Bluetooth, you’re probably done. Pair it up and listen to a song. See how the quality is.

If the quality is pretty good on your Bluetooth audio source, you’re done.

If your audio source doesn’t support Bluetooth or if the quality sucks, you’re not done. I found, for example, that there’s some real weirdness with connecting a Bluetooth audio headset to a Windows 7 computer. <techspeak>Windows 7 requires a very specific A2DP audio profile that not every Bluetooth headset supports. This dongle doesn’t support it. If you search for “Bluetooth audio quality in Windows 7” you’ll see a ton of people with the same problem on different headsets/adapters.</techspeak>

In this case, you also need a Bluetooth audio transmitter dongle. I bought the JayBird uSport Bluetooth adapter for 3.5mm devices. What this does is plug into the headset jack on your audio source (computer, iPod, phone, etc.) and sends the audio signal via Bluetooth. Pair that up with your receiver dongle and you have both pieces to the puzzle covered – the transmitter and the receiver. 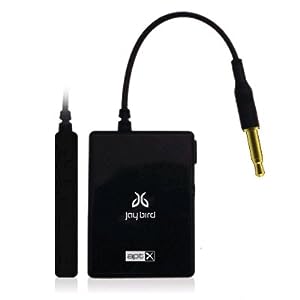 Again, there are different transmitters out there, but this one seems pretty popular and supports this new protocol called “apt-X” that allows you to potentially get a better audio quality if you also use a receiver with “apt-X.” You can also try the TaoTronics TT-BA01 adapter for 3.5mm devices, which will probably work. I wanted the upgrade-ability, so I went with the JayBird.

I’m listening to Pandora through my computer using the BTI-005/JayBird uSport combo right now and it’s decent. Is it audiophile quality? No, but it’s decent. Given that it’s compressed music streaming over the internet and into a mediocre pair of headphones… I don’t think the Bluetooth portion of things is that noticeable. When there’s a gap between songs or a really quiet section of a song, I do hear a low-level “buzzing” background noise. But for what I’m doing… it’s good enough.