My Toddler: Party Rock and OCD

Phoenix is not quite two, but in her words, “I big.” She is starting to become very independent, or at least she tries to be. 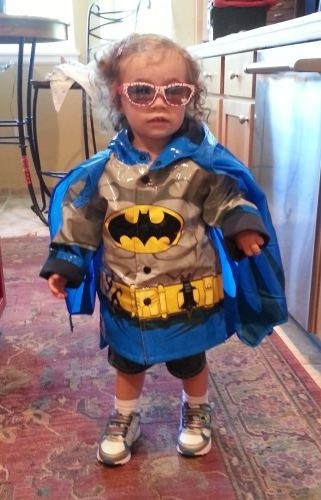 In some cases she doesn’t even want you to read her a bedtime story. She’ll do that herself. If you try to sit next to her or point things out, she’ll take the book and move somewhere else.

She really likes music and dancing, and there are rules around that you must follow. If she’s dancing, you need to get up and dance. If you sit down, she’ll come over and grab your hand to pull you back up so you’re dancing again. (She says, “pulllllllll” as she pulls you.) If you stop dancing and just stand, you get scolded (“Daddy! Dance! Go!”). For a while dancing amounted to bouncing up and down and clapping. Now it’s more of a “march” where you take big steps and swing your arms.

Her favorite music is electronic with a heavy disco sort of beat, particularly the LMFAO album Sorry for Party Rocking. We listen to that nearly every day in the car on the way to day care. The conversation goes something like this:

Phoenix: Daddy, I want rock. [points at the radio]

Me: You want to listen to the radio?

I scroll to find the album and start playing it, at which point any bad morning changes to smiles and clapping and giggling. She really loves her party rock. She can’t even wait between songs - that three second pause? - before you hear, “I want rock!” Don’t try to put something else on, she’ll tell you no. In some cases if she doesn’t recognize the first few notes, even if it’s just another LMFAO song she doesn’t hear often, she’ll say no. She wants that specific album.

We had that conversation this morning, but when we finally got to day care she saw we were there and started crying. “No, Daddy! I want rock!” Don’t turn that party rock off, there’s gonna be a problem. She knows what she wants.

This morning she knew she didn’t want socks. Some days she does, some days not. When she doesn’t, she’ll try to put the socks back in the drawer after you get them out. We took the socks downstairs to put them on her. The whole time, she was acting like there was something upstairs she wanted, but we were trying to get ready so kept telling her no, it’s time to get ready to go.

Eventually it came time to put the socks on and she had a total meltdown like we packed the socks with acid before putting them on her. Fine, no socks. We pulled the socks off and she grabbed them both and pointed upstairs. “Back.” She wanted to put them back. She walked Jenn up the stairs, went into her room, and put the socks back in the drawer. Then she picked up a pair of socks that didn’t make it into the laundry bin and put them in the bin. Finally all was right with the world. I’m guessing that nagging thing she wanted upstairs was to put those socks in the bin…

…which meansI successfully passed along my OCD to the toddler. A place for everything and everything in its place. Jenn, you’re outnumbered!