Driving The Speed Limit Is OK, Too

Today’s Traffic Asshole is actually from Tuesday, but I got busy.

Every Tuesday I go downtown Hillsboro to get my allergy shots. Heading down there, I ended up getting behind this fellow:

This fine driver decided that it would be somehow safer to drive 25mph in the 35mph speed zone. Here’s a message to all of those “safe” drivers out there:

Going 10 miles per hour under the speed limit doesn’t make you a safer driver, it makes you a traffic obstruction.

That was in the fast lane, too. At one point I was blocked behind him, and in the other lane was another slow-mover. I thought to myself, “Great - Mexican roadblock.” Then I remembered what area of town I was in and realized they very well probably were Mexicans. Ironic.

The picture I caught the guy in, he was finally moving into the slow lane, which was moving faster than he was. This is where he decided to cut in front of me, because driving slowly in front of me somehow makes people happy.

As I was walking out the door this morning, I saw what I thought was a crumbly wet leaf sitting in our entryway. Having just vacuumed, I decided to pick it up and throw it out the door.

It was cat vomit. I had just picked up a handful of cat vomit.

That’s how my day started today. A handful of cat vomit. I guess you can only go up from there.

Friday night I went to a Winter Hawks game and watched them win, but it was a Pyrrhic victory at best. I never thought I could watch us win and think the game sucked so bad.

Saturday morning Jenn’s family was having family pictures taken. Since the mall they were having pictures done was halfway to the store I wanted to go to that day, I said I’d go, too, hang out at the mall while they were getting pictures, then Jenn and I could continue on to my target destination.

We got to the mall at 10, but the mall opens at 10, so we all stumbled around trying to find each other because we all came in different entrances. The photo appointment was at 11, but when we checked in, we found they were running way behind. I decided to walk the mall.

I probably walked 30 miles. Jenn’s family didn’t even get in until almost noon, then didn’t get out until nearly one. I have about an hour-and-a-half’s worth of tolerance for the mall, so after three hours I was ready to leave before I hurt someone.

Jenn wanted to get food, so we went to Denny’s. Now, Denny’s is not somewhere that I ever plan to end up, but we somehow actually planned to go to Denny’s that day. I won’t go into details, but I left there feeling I had consumed way too much grease and I realized again why it is that I never plan to end up at Denny’s.

After Denny’s we made a Costco run - I got my copy of the Indiana Jones trilogy on DVD - and a Fry’s run - I got Time Crisis 3, another light gun game, with the gun so I can play one person with two guns or two players.

Saturday night was another hockey game. We won again and it was better hockey all the way around, but it still didn’t really get me into the game. Oh well, right? A win’s a win.

Sunday morning we went to my parents’ house and washed our cars. It’d been like a month since I’d washed mine and it was definitely time. That took most of the morning, and then we went back home and finished up the chores that we didn’t get time for Saturday.

While it isn’t my favorite of the shows I’ve seen, I liked it. It definitely reminded me of the classic circus, but with an upgraded feel so it appealed to the child inside an adult. There were acrobats and trapeze artists and a strong man and clowns… and all of it came together wonderfully.

I sit in my cube all day coding. I hate coding. Sure, it takes some creativity to solve problems programmatically, but when all is said and done, all you’ve accomplished that day is pushing bits around. Did it make any real difference? Is there anything to show for it? No.

Seeing these shows makes me realize I really should have just gone for the art school and not done computer science. Now I’m pretty much stuck where I’m at, and without the money and time to go back and learn the stuff I should have learned to begin with, I’m not qualified to do anything else. But since I can’t do that, it helps to know that style and art really aren’t dead, and even if I can’t generate them for other people, I can take part in the enjoyment.

I thought about maybe getting a job at the Cirque main office or something. Even doing what I’m already doing, but for a company where I fully believe in and support the product. (I mean, online banking software? Who cares?!) But then I also thought that once you see the underworkings of the beautiful machine, once you see that sort of thing every day… you may get anesthetized to it. Would it lose its meaning? Or would contributing to the effort be fulfilling? Somehow I don’t think I’ll ever have the opportunity to find out.

So I look forward to seeing the Cirque come to town, and I’m sad when it’s over. While I’m there, I wish I could take part in it, living the dream. Until the next time they’re here I’ll just hope to carry the feeling inside me.

I couldn’t take a picture of today’s Traffic Asshole of the Week because it’s foggy out and all you really would have gotten to see with my shitty camera is fog with two taillights in it. Not too interesting.

Since there’s no visual accompaniment, I’ll make it brief.

Cruising along the freeway today - again, admittedly foggy - going about 60mph. I was one exit before I needed to get off the freeway and was driving alongside the freeway onramp.

As the person already on the freeway, it’s my job to maintain speed and constancy so the guy on the ramp can adjust accordingly and properly merge. I had a three-second following distance behind the guy in front of me, and there was quite a bit of space behind me. The guy merging had plenty of space.

He decided it would be a good idea to pace me - match speed and position so he’d eventually merge right into my side. I started getting worried because he was running out of room, so I sped up, at which point he decided it was a race and also sped up.

Hey, my exit was next, so I decided to slow down and let him in. I mean, who cares, right?

This guy merging saw that and then decided to slow down, too, so that he was again pacing me speed-wise, but now his rear bumper was going to merge into my front fender.

Time to lay on the horn.

You know what? The guy just continued to merge.

He slowed me down to 45mph, merging ever closer to my front bumper. I couldn’t get around him because of the solid line of cars in the other lane. 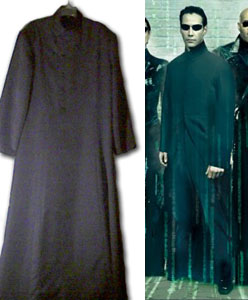 I finished my coat last night, washing it for the first time since it was fully assembled and then pressing it. My hem’s not terribly straight, but the coat is flowy enough that I don’t think you’ll notice. As you can see, it’s very similar to the coat Keanu Reeves wore in the second Matrix movie, but mine doesn’t part in the front under the buttons the way his does. Damn close, though. I’m pretty proud of it - it’s the first article of clothing I’ve ever really sewn.

I stopped after work to have dinner with Todd, a friend of mine I hadn’t seen for a long time. It was good to see him again and catch up.

After I got done with that, I started heading home, but it took me 30 minutes just to get on the freeway and get to the next exit, just one mile down the road. I got off the freeway and stopped at Fred Meyer and wasted an hour in there so the traffic would die down. I ended up making it home around 8:00p. Ridiculous. The only thing that happened was that it had rained that day. We’re in Oregon, folks. It rains all the time. Figure out how to drive in it.

I saw that the Indiana Jones trilogy is out on DVD. I’ve got a $10 off coupon for it at Costco; I’ll have to go this weekend and pick it up.

I’m really digging iTunes for Windows. It does everything I want it to, with a few shortcomings:

The demo project I’m working on is quickly coming to a close. I’m done with it on November 7th, when we have to ship it to the sales guys so they can prep and show it to customers at RDC. Which means there are two more weeks until we’re done… not much time, and a lot still to do. Here’s hoping.

…Okay, I just typed this up and tried to post it. Got a “server not found” error. ARGH. Hopefully I’ll get this thing posted at some point today.

I went to the Microsoft Office System Launch Event in Portland yesterday, so I didn’t get to blog. However, I did write an entry, and here it is…

I’m sitting in a reasonably dry lecture about integrating Office and Visual Studio and I realize I never wrote yesterday about my new HDTV.

Jenn called the cable company and set up an appointment for Saturday between 8 and noon. Of course, to the cable company, that means ten after noon. Regardless, the cable guy showed up and basically all he did was give me a new cable box.

Next thing I know, I’m watching the crispest picture on TV that I’ve seen since I first got a DVD player. And the sound… Dolby Digital 5.1! Amazing!

HDTV is always in widescreen, which I wasn’t aware of. And for the folks with smaller TVs, I guess that’s not so great. For us with 40” tube TVs, that’s just fine. Seeing programs in widescreen is a nice change - you get to see more, and it’s a nice new perspective.

For example, Sunday night ABC showed Toy Story 2. See it on normal TV, it’s full screen in stereo. In HDTV, it’s widescreen and has a picture clearer than DVD.

The real experience was with Alias. Jennifer Garner in high definition alone is worth the cost of admission. That plus surround sound and I’m a happy camper.

If you have an HD ready TV, it’s worth your while to get HDTV. Don’t have the TV? Time to upgrade. I, personally, can’t wait until high definition DVDs. Better picture, but yet another reason to re-buy all of the movies we have.