I was looking at my blog this morning and I realized that there’s still a lot of work to do. I have some keen ideas for fixing it up a bit that, pending on how much time I get this weekend, I may get around to doing. Then again, I may save it for next weekend when Jenn’s at work so I can actually concentrate on it.

Things I want to do include: Get rid of the huge list of “date” links along the side navbar. That’s nuts.

Make the templates a little more standardized by using includes rather than having the template physically on every single page. That might not make sense to the non-technical, but basically, I want to maintain my template in one spot, not on each page. Easier to update, right?

Fix the admin interface so entering entries with formatting is a little easier. Greymatter had a much better interface so I’ll probably just rip off some of the Javascript from there and integrate it into the pMachine interface.

Fix the little blurb things (see just below this entry) so that if I make them links to stuff on Amazon, you can mouseover the link and see a picture of what I’m talking about. Sort of like a picture tooltip.

Put my Amazon, BlogSnob, and AllPosters affiliate stuff back on the site. It may not actually generate any revenue, but they make it look special.

Put my junk store, wish list, and sites-to-visit links back up. Almost more for my convenience than for yours, since you cheap-asses never seem to buy me anything, nor do you buy anything from me.

See if I can somehow get the center column to dynamically size itself so those with higher resolutions on their monitors can fit more on the screen. I had it working this way before, but for some reason it broke, so I took it out.

Change my “about” and resume pages over to PHP to take advantage of the new template.

Fix the little butterfly in the top corner of the page so clicking it takes you to the home page.

Lose the calendar in the left bar. Is that really any help to anyone?

Update my terribly out of date “about” page.

Fix the entries on the blog that have pictures. The images need to move to the pMachine “upload” directory and the location in the entry needs to be changed. Also, the “pop-up” window functionality for images has been lost in the move to pMachine so I need to build that back up again and put it back in the appropriate entries.

Fix entries that link to other entries so they don’t link into Greymatter.

I think that’s it. At least for now.

In other news, I’m stewing a little over the whole Playstation 2 debacle. I’m really hoping I don’t run into trouble when I call them Saturday (and I know I’m going to end up calling them). Maybe just this once things can work out right the first time around? Stay tuned…

The Myth of the DRE

After badgering my boss (Greg - I’ll name him by name this time because he’s been bitching about how I refer to him here like he’s two different people) to try Time Crisis 3 out on his PS2 for a couple of days, he finally did and called me up last night to tell me that…

The thing is, I’m not at all comfortable with cracking that thing open to fix it, clean it, or what have you. I found all sorts of guides telling me how to fix it, ranging from a simple cleaning to adjusting gears to messing with the laser voltage, but none of them really made me keen on dealing with this thing.

Then I found that there’s a class action lawsuit against Sony for exactly this reason (official site here). Turns out, you can get a free repair from Sony if you call them and complain about it. I think I’m going to try that out before I commit to cracking it open or doing anything rash.

The more I read about it, the more irritated I get. This seems like a vastly common issue. Makes me wonder if Sony engineered them poorly specifically to get consumers to buy more units.

Rubberneckers Clog Up The Works

It’s been a while since we had a Traffic Asshole, so I got one for you today.

I hate traffic accidents. They fuck up traffic for everyone, regardless of which direction you’re traveling or where they are in relation to you. Why is that? The answer is simple - Rubberneckers.

Yes, it’s the people who need to slow down and check out what’s going on that end up clogging up the roads like so much shit in the drain. I wish I had a plunger big enough to take care of the problem, but I don’t. My blog is my plunger.

Let’s let the image speak for itself, shall we? 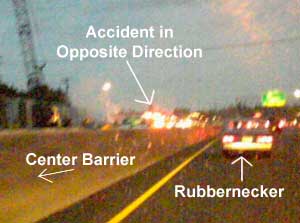 As you can see, we’ve got an accident on the opposite side of the road, in the oncoming traffic. We’re separated from the oncoming traffic by a concrete barrier in the center of the road. This same barrier pretty much obstructs any decent view one might get of anything over there, but that doesn’t deter the myriad rubberneckers (particularly the guy immediately in front of me) from coming to a near complete stop just to check out what’s going on, then flooring it to close the 500 meter gap between him and the car in front of him. Nothing wrong with my side of the road, just people slowing down to watch the flashing lights.

(That said, the poor quality of the image just goes to show you how badly I need a better digital camera. I think we could all commiserate on our traffic woes better in a higher resolution, don’t you?)

I still have a lot to do on pMachine, including fixing the categories on all of the articles that I’ve previously posted, but there are like 400 or something and that’s going to take a bit. I’ll get there.

I’m also considering just going forward with things and allowing the past articles and entries to just wither and die like so much detritus. But that’s my history, and I should probably make it somehow viewable, if for anything but retrospection. What a pain in the ass.

Speaking of pains in the ass, I went to the doctor yesterday and got the “Dr. Jellyfinger” treatment. I told him it was just like being at work, but in the doctor’s office, I was getting paid more. The doctor thought that was pretty funny. That’s the first time I’ve gotten that, and I have to say that, 100% conclusively, there is no way I could ever be gay.

Tried a “Peppermint Mocha” Frappuccino today. That was pretty good. I may have to change my usual order. I even got sprinkles.

I’m in the process of copying my CD collection into 256kbps AAC format, and so far it’s going well, but I’m not too far into it. I have like 700 CDs, and after a week of this, I’m only into the letter “C”. I need to have like this CD jukebox where I can load everything in all at the same time and just have it rip all of the CDs simultaneously.

I went to see the latest (and presumedly final) installation of the Matrix series today. Work had a little outing and rented out the theater down the street, so I figured it’d be as good a time as any to see how they finished off the series.

I always say, you get what you pay for.

If you saw The Matrix Reloaded, you’ll kind of know what I’m talking about. In that, you see the first Matrix slowly crumble, and I don’t mean in the movie - I mean quality-wise. The first one, we came to expect certain things. We came to enjoy the visual style and the original effects combined with an easy to swallow philosophy lesson hinting of religious symbolism. In the second one… where’d that great style go? Why’d the subtle lesson and symbolism get thrown out the window for an in-your-face lesson a la the “special” episodes of sitcoms?

To really understand why this was so bad, you don’t have a choice but to look at the first two movies. I mean, they’re a part of the trilogy, and as the conclusion of that trilogy, you need to keep that in mind, so I’m going to continue going back to them.

This, however, is not a review of the first or second Matrix films. It’s a review of the third. I just needed to throw some context in there so you understand it when I say: How could they do this to me?

In the first movie, we spent most of the time in the imaginary “Matrix” world that the story revolves around. We saw the “real world,” but the action took place in the Matrix, fighting the powers that be from within. In the second movie, we got a lot more “real world” and less Matrix. Still about half-and-half, but more “real world” than I was liking.

The majority of this latest takes place in the “real world,” and I’ve gotta say - the real world is a drag. It’s bland, it’s boring, it’s not even interesting to look at. Why are we stranded there? Let’s see some more of the stuff we came to see!

Instead, we get things like Keanu Reeves attempting to be emotional. We get an ever-thinning Carrie-Anne Moss. We get not nearly enough Monica Bellucci. And we get random scenes that have no real discernable meaning to the plot - total filler.

Bah. As my friend Kristen says, “ridiculous emotional claptrap.” I went on a ten minute rant about how many things were wrong with the end of the movie alone. There were so many other ways to end it. How about this:

Neo, after fighting his way through the Matrix, finally defeats Agent Smith. As Agent Smith dies, Neo wakes up in a white room to find out the whole thing was a medical experiment being done by the machines to see if humans would be able to accept a Matrix in lieu of a real world.

Or how about this:

Neo fights Agent Smith and prevails, only to find out that the “real world” is a second Matrix and now he has to bust out of that, too.

Neo fights Agent Smith and prevails, then wakes up in a pink harvesting pod just like he did in the first movie.

But no. Instead you get utter insanity. No cohesion. No follow-through. Nothing that resembles the first movie aside from some peripheral references to events in the past. Don’t we, as the audience, deserve more than that? It doesn’t have to be a happy ending even, as long as justice is served.

I feel betrayed. Betrayed by the Wachowski brothers for having seen such promise in the first movie and to have that thrown entirely away by commercialism and overproduction.

My only hope now is the success of the Harry Potter series. Sigh.