Select your colors, select the indicator type, and generate it. Free. http://ajaxload.info 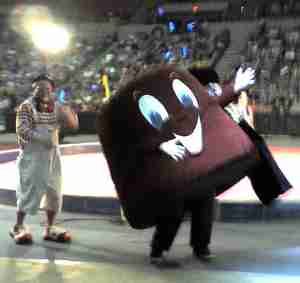 Okay, folks, here are your million-dollar product ideas for April 2008. If you implement these, remember to send me a t-shirt or something.

Coffee should come in milk cartons. I can’t really remember the last time I actually measured coffee into the coffee maker. Once you’ve done it a couple of times, you know that a mound of coffee about this big is the equivalent of two scoops or whatever. But pouring coffee into the machine out of a bag is, well, sometimes troublesome. You kind of have to manually munge a “spout” on the end of the bag, too much comes out… bah. Other containers - cans, tins, etc. - are also problematic. Put it in a milk carton so I can pour it.

Combine Dance Dance Revolution and Rock Band for the ultimate music experience.I think I have like six versions of DDR at home. I know I have at least four dance pads across two different consoles. I love DDR. I also love Rock Band. They should let you hook up more than four people in Rock Band. Keep the four band members - guitar, bass, drums, vocals - but add the ability to hook up dance pads. The vocalist could dance while singing, and additional dance pads could be added for “backup dancers.” Hey, if the guitarist really wants to get crazy, dance while playing the guitar. You could combine that with the stage kit coming in June and have yourself a full production, ready to go on tour. I’d totally buy it.