I was noticing some of the disk access on my Windows Home Server was running a bit sluggish and I thought about how usually when this happens on other computers, I’ll run a defrag… but since Windows Home Server has a different filesystem, you can’t really just do a stanard defrag, can you?

Turns out, there are Windows Home Server defrag products.

The two that seem to be the most popular are PerfectDisk 10 and Diskeeper 2009. Both of those have WHS-specific versions that integrate nicely with the WHS console and understand that filesystem. There’s a great head-to-head review of these products over at We Got Served. The end result? It’s a tie - they are comparable products.

I ended up choosing PerfectDisk based on the price point. It costs just over half of what Diskeeper costs ($50 vs. $80) and I found this coupon code (SUMMERFUN20 - expires June 30) over at Philip Churchill’s site that got me $10 off that so I’ve got WHS defrag for $40. Can’t beat that.

UPDATE 1/26/2010: I noticed after about a couple of weeks of PerfectDisk for WHS use that I was getting health warnings every three or four days on my WHS system disk. At first I thought I was going to have to replace the disk, but on a hunch I disabled defragmentation of the system drive. While the warnings on the system drive stopped, I did get a warning on another drive, so I disabled PerfectDisk on the WHS entirely. Since then I haven’t gotten any disk health warnings. I’ve run all the disks through extensive diagnostics so I have to blame PerfectDisk for the warnings. I’m going to post to their user community and see if anyone else is having the same issue, but in the meantime, YMMV.

OK, so I’m familiar with those blogs that basically just scrape your RSS feed and steal your content word-for-word, and I’m a victim of several of those myself. It’s always annoying when someone refers me to one of the articles on those blogs and then I’m like, “Uh… yeah… I wrote that. Months ago.”

I just got an anonymous comment, though, that pointed me to a new and interesting level of that sort of content theft. The funny thing is, they accused me of being the thief. Anonymously, but still, the accusation bugs me.

The article in question is my set of instructions for getting the most out of Twhirl. I posted that back on April 22, 2008. The anonymous comment told me I had plagiarized an article on a blog that was posted on February 18, 2009. The URL of the ripped-off article is http://www.themoxiemomblog.com/headline/how-to-easily-create-a-customized-twhirl-color-scheme (I’m not hyperlinking it because I’m not giving that ripoff any Google juice. Note, also, that IE8 crashes on certain pages on that site… I don’t know if it’s trying to do something malicious or if that’s just IE8, but you’ve been warned.)

This copy actually required a human being to reword the article. It’s got exactly the same points, the same steps to create a custom Twhirl theme, everything… but sentence structure was switched. For example:

If you open the articles side-by-side, it’s a blatant theft of my content, yet I’d classify this as far more annoying than the robotic theft of my content wholesale because this level of theft actually requires a human to tweak it. And the fact that someone accused me of stealing my own content? ARGH.

Find Deadlocks with Typemock Racer - And Get a FREE License!

Typemock released a new tool you can use to identify potential deadlock conditions via unit tests called Typemock Racer. If you’ve wondered how to test thread safety and such, this is for you.

Plus, with the release, they’re giving away free licenses. Try Racer out, blog about the experience, and tell Typemock about it, and you’ll get a license for Racer. The full details are over on the Typemock blog.

I finally got a chance to try out the Netflix integration with Windows Media Center last night, and I have to say - the playback quality is horrible. Like, really, truly bad.

I ran the test. The results:

I ran the test on the same physical PC with the same network connection to try to rule out hardware or network issues. I didn’t go to the lengths of determining if the two players stream from different back-end servers or anything, though, so there well may be something on the network that caused the issue.

Long story short, though, I’m totally unimpressed. I had high hopes, too. Guess I’ll stick with the Xbox 360 streaming for now. 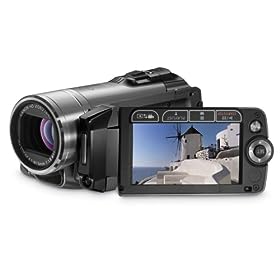 Jenn and I picked up a Canon VIXIA HF200 HD Flash Memory Camcorder a bit ago since we didn’t have anything that’d capture decent video and we wanted something a little more than those little Flip Video deals that have become so popular.

I’ve been messing around with it and so far I like it a lot. It’s very light, it’s easy to work with, and the video that comes out of it is great - we’ve taken some test videos and played them back from the camcorder directly to the TV and it’s beautiful.

That said, I don’t want to be one of those people who leaves their videos on the camcorder and just buys new flash memory when it’s filled up. That’s dumb. I gotta get the videos off the camera onto the computer.

To that end, I looked at what the camcorder records. It uses the AVCHD format (.mts files), which, from what I can tell, is basically “the Blu-ray file format.” (Yes, I know that’s a technical generality and it’s not complete and correct. Just go with me here.) Honestly, I’ve lost track of all the different file formats for things and what to do with them all. I have my music in Apple Lossless (AAC) and MPEG-4 (also AAC, but not)… I have movies in full VIDEO_TS format (which is sort of MPEG-2 in disguise)… I’ve got some videos that are DivX, some WMV… and I just want to play the damn things.

So I started some research. Turns out I’m much less “in the know” about how these things work than I thought. Apparently some formats are just “containers” like Matroska (.mkv files) and they might contain video of any format (like H.264) with accompanying audio of any format (like AAC). ARGH.

When this happens, I start playing dumb. I mean, average people buy these things and somehow get them to work, right? They don’t go do all the research I do to figure out what’s what. That means - time to install the software that comes with the camera.

I did that - installed the bundled software - and it’s absolute garbage. The UI is confusing. The manual that comes with the software doesn’t actually get installed with the software so you have to go digging on the installer discs to find it. The manual says the software will work with certain disc formats and file types, but it’s wrong. In the end, the only thing it does reasonably is copy the original .mts file from the camera… but don’t move that file once it’s copied over or the bundled software will lose track of it and corrupt your video library. Absolute crap.

I went back to research because there have to be real, decent, non-bundled apps that will do… something… with these .mts files. Turns out I have a few options (including Nero 9 and Cyberlink PowerProducer). I’m also trying to figure out how to maybe get these things to play natively on… some device or another. Playstation 3 will play the files, but Windows Home Server (using old Windows Media Connect) won’t share .mts files because it doesn’t know them, so I have to sneaker-net them over to the PS3 on a USB stick. I can install a codec or three and get them playing in Windows Media Player, but I have to manually do a File -> Open on them because the extension (.mts) isn’t registered to anything. (Yes, I can fix that, but should I?) How do I get Windows Media Center in my other rooms streaming these videos? Is the Cyberlink HD264 pack the answer?

After going through all of this, I returned to my original question - how do average people get these things to work? I decided that they don’t. The difference between the average person fighting with this and me, though, is that the average person probably doesn’t care that it doesn’t work, or gives up in frustration and stops trying. I know enough to be dangerous and I care that it doesn’t work. That’s a dangerous, stressful combination. Maybe I need to just stop caring.

But if I don’t care, who will? And, ultimately, what will become of my videos?