My birthday was last week Thursday and I had some PTO to burn so I decided to take Thursday and Friday off. Four day weekend, right?

It actually sort of started Wednesday when my team at work brought in a black forest cake and we had a mini-celebration in the afternoon. Nice. 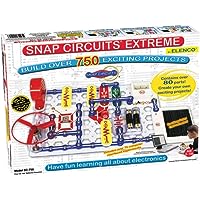 Thursday, my actual birthday, I woke up and Jenn gave me my gift: a Snap Circuits Extreme set

Later that day my parents came over, Jenn got off work early, and we went out to lunch at Red Robin. After lunch, we saw The Hangover, which was pretty damn funny… and just a little gross in parts. We ended Thursday with a tiramisu we picked up at Haggen.

Friday was a pretty relaxing day where I took care of a few chores (like cleaning up the office) that I’d been wanting to get to and I started playing Dead Space on Xbox 360, which is a pretty freaky game I got from my friend Jason.

Saturday my parents came back over in the morning, we mounted the bikes on the car, and headed out to the Banks-Vernonia state trail. We didn’t ride the whole thing, just about an eight-mile round trip, but the first half of the trip was a slight uphill so it was a nice, light workout. The return half of the trip was awesome, though - we were able to coast almost the whole way back without pedaling. (We had a contest to see who could coast the furthest. Jenn won by a few yards.) Jenn also picked up my official birthday cake, a tasty lemon chiffon from Beaverton Bakery. (Yes, for those counting, that’s three cakes in four days. I do so love me some cake.)

Sunday Jenn and I finished up the weekend by going to see Harry Potter and the Half-Blood Prince. I’d seen it already, but Jenn hadn’t and it was nice to see it again. Plus, it was pretty hot on Sunday afternoon and who can beat the heat better than the movie theater?

All in all, four days’ worth of fun and celebration, which was relaxing.