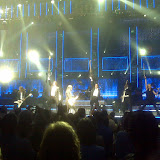 Putting log4net.config Outside of Application Configuration

I use log4net for logging in various applications, but every time I start a new app I forget this and it never quite comes up in Google for me, so here we go.

Most of the examples on the log4net site showing configuration shows it right in the App.config/Web.config file for the application. That’s a painful way to go if you have, say, a single log4net.config that you want used in several projects or if you otherwise want to stick log4net.config somewhere else.

The magic bit that at least I can’t easily find and always forget is:

If you add an appSettings key called “log4net.Config” you can put an app-relative path to an external log4net.config file in there and everything will automatically configure itself using that.

That example puts the log4net.config file right in the root of the application. You could specify “config/log4net.config” to put it in a “config” subfolder, too, for example. You don’t even have to call the XmlConfigurator.Configure method or mark your assembly with an XmlConfiguratorAttribute or anything. Magic happens. It just works.

This is specifically for the default “log4net-default-repository” repository. If you’re doing something fancy with different repositories, YMMV. I’ve not tried that.

In both Vista and Windows 7, when running at full 1920 x 1080 resolution, I found that I would occasionally see a one or two pixel “line” along the right side of my TV when playing video. It looked like some sort of artifact left from the menu I was just using to select the video, but I couldn’t tell. I started down the road of trying to figure out if I needed to tweak some overscan setting or something when I posted to The Green Button forums to see if anyone else saw this.

Turns out there’s a hotfix for this specific issue.

KB 974324: “Black and white pixels unexpectedly appear on the right side of the screen when you run Windows Media Center in full-screen mode in Windows 7 or in Windows Vista.”

Downloaded and installed the hotfix, problem solved. If you’re seeing this problem, grab the hotfix.