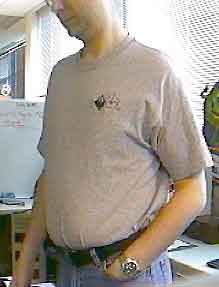 Okay, first up, check out the fat gut there. How come nobody ever told me I was such a fat fuck? Maybe I should start binging on Subway so I can be a skinny fuck like Jared. This just goes to show you that I definitely need to work out. This is just disgusting.

Okay, so I went to SQL Server administration training last week. I learned lots of stuff, but here’s the primary set of stuff I gained from going to training:

First, going to training is like being on fucking vacation. Not having to go in to work, not having to deal with bitchy users all day, not having to troubleshoot crappy products or fix things I didn’t break and/or have nothing to do with… it’s brilliance. It’s like a nonstop party. Maybe I should be paid to go to training all day.

Second, while I absolutely hated school - both high school and college

Third, there’s a hell of a lot of stuff I have no idea about regarding database administration. There’s a lot of cool stuff out there that would make my day loads simpler, and I don’t know a damn thing about it. Going to the class was like this epiphany - all sorts of cool stuff I can implement that will make things run generally smoother and possibly shut some of the whiny users up. It just doesn’t get much better than that.

So, besides training, what’d I do all week?

Well, Jenn and I rented The Ring and Rocky on Friday night. The Ring was pretty good - more a psychological/image-oriented horror film than a slasher flick - and it was sorta freaky. Jenn’s sister called us at exactly the wrong moment in the movie and both of us screamed. I had only seen small clips of Rocky, and after talking about it with a friend of mine at the hockey game, I had to rent it to see for myself. How was it? Hmmm… Well, it won the Oscar for Best Picture in 1976 and I reflected on that for a while after seeing the movie… where were the standards in 1976? Best Picture, for crying out loud! Heads up our asses, man, heads up our asses.

Went to the last two Winter Hawks games of the regular season on Saturday and Sunday. I’m really glad the season’s over; I’m not going to go to the playoff games because I’ve been waiting so long for this season to end - I’m glad to finally have some free time to do stuff again. I’ll miss my hockey friends, but hopefully we’ll hang out during the off-season. I gave my friend Jerry my email address and phone number, maybe we’ll get together and watch the other four Rocky movies. Who knows?

Bought a couple of CDs in my off-time: Garbage - beautifulgarbage and Quarashi - Jinx. Both are good in their own right, though I’m sort of listening to them and hoping on a level that they grow on me a bit more. The Quarashi disc reminds me of Rage Against the Machine, which is fine, but I like them better because they’re not so politically-oriented as Rage is. The Garbage disc… there are a couple of really good ones on there, but for the most part it feels like they’re trying too hard to “be original” or some crap and rather than putting out good music they’re focusing on liberating their artistic creativity. Eh. If you do get that one, check out the remix program for your computer that comes on the disc. It’s really cool.

Got a call on the Friday before last from my mom telling me that my grandfather (mom’s dad) was in the hospital after having another heart attack. I rushed in to see him laying in the ICU, telling jokes and flirting with the nurses. He was out a couple of days later. In the scheme of things, as heart attacks go, it wasn’t that big of a deal. I’m glad he’s okay; I think he’s pretty well indestructible, and I like it that way.

Survival of the Least Annoying

Watched Survivor last night at my parents’ house. I was glad they voted Joanna’s whiny, annoying, overly-pious, off-key-singing, stupid ass off the show because she was irritating the living shit out of me.

I finished the majority of the sewing on this hat project I’m working on before Survivor started. It turned out pretty good, but I’m no professional tailor or anything. Now I’ve gotta wash it to get the disappearing ink to, well, disappear, and then I’m going to iron it and start beading it. I think once the beads get put on it’ll be a lot better. Right now it looks sort of rumpled and, while I am pretty pleased with it, I think it could be better.

We went to lunch today with the CTO of the company. He took the department out because he claims we’re doing a good job. I appreciate that he thinks so, but I’m honestly waiting for the other shoe to drop. There’s no such thing as a free lunch.

The end of the hockey season is approaching, and I’m glad to see it coming. The Winter Hawks suck this season and as much as I enjoy hockey and seeing my hockey friends, it’s difficult to pay money for season tickets to a losing team. I have hope that next season the coach will kick their asses if they suck this bad again. I think we have like three games left; next Sunday is our last game. Hey, maybe I’ll actually have some free time after that. Wouldn’t that be novel?

I have learned a lot about SQL Server databases in the past couple of days. The primary lesson is: if you have a 10GB database on a 25GB drive and you decide to delete a large portion of the database, the database transaction log will not hesitate to fill up the remaining 15GB of disk space and crash the system.

Rockstar Games is distributing the original Grand Theft Auto game for PC - free! All you have to do is sign up and download it. It’s 300+ MB, so a fast connection is key, but that’s cool that they’re giving it away. I downloaded it and burned it to disc. I’ll have to try it out one of these days.

I cannot wait for March 23 - I am impatient for my GBA SP.

Out for SQL Training

I’ll be out for SQL Server DBA training the week of March 10 - 14, so there will most likely be no posts. I probably won’t even be getting email, so, uh, don’t expect any replies or anything. We call it busy in my country.

I got notified via Classmates.com that my 10-Year High School Reunion is coming up in July.

I’ve been thinking about this for the last couple of days and I’m not sure what to make of it. I went to Jenn’s high school reunion and it was lame, even according to her. I don’t know if mine will be that lame, but I’m beginning to wonder if all reunions aren’t just a little lame. I never really got along with most of the folks in high school, either, so it’s not like I’m dying to see most of them again. The ones I really got along with I still talk to.

Actually, I’m still puzzling that one out. As one of the valedictorians of the class (we had two), I spoke at graduation. I guess that sort of makes it my civic duty to show to the reunion, doesn’t it? But then, people didn’t like me so much (at least, that’s how I felt), so maybe not.

A short while ago I was flipping through my senior yearbook. Honestly, if you covered up the names in there, there’s no way I could tell you who 95% of those people are. I don’t remember; it’s been blocked from my mind.

I hope there will be nametags if I go.

If anything, I am thinking I’ll go to the formal dinner/dance thing. I think the most people will turn out for that one, and I’m not much for socializing at informal gatherings of people I don’t really know (at least, not anymore). Also, the formal event is a “no kids allowed” deal, whereas they can go to the informal ones. I’m not so hot on kids, so that’s a big plus for me.

I asked a friend of mine, Lisa, if she is going to the reunion. She hadn’t heard about it, which makes me wonder if the only folks who know about it are the ones on Classmates.com. That would suck, wouldn’t it?

I’m feeling a tad under the weather lately with the slightest twinge of a head cold. I like to blame Jenn for that, since she’s been sick for the last week and a half, and I think that her snoring right in my face at night has finally taken its toll. I drowned my sorrows in NyQuil prior to retiring for the evening, and I am told that I did my share of snoring last night, but I am entirely unable to remember since I was well into my NyQuil Coma. (I have the cherry version, not the green-fucking-death flavor.)

I received the Red Dwarf series pack of DVDs (containing the episodes from series 1 and 2) last night from Amazon. It had been a while since I’d seen the show (and Jenn had never seen it), so I popped in the first disc and watched the first episode - The End. I prefaced the playing of the show for Jenn with “This is British humor, so you may or may not like it.” On playing the show, the first words out of her mouth were “Hey, wait! This is British!” Hmmm. Someone wasn’t listening, were they?

The first episode, like other TV show first episodes, is good to introduce the characters and the story but not so good for the rest - it doesn’t demonstrate really how funny the show can be. I don’t think Jenn liked it as much as I did, but I’ll try to get her to watch a couple of the funnier episodes and see where that takes us.

After that and a little tortellini for dinner, we went over to my parents’ house to use my mom’s sewing machine. Jenn’s making herself a dress, and I’m making a Queen Amidala style beaded hat out of a childrens’ winter hat pattern. It’s the first thing I’ve actually sewn from a pattern (usually it’s just guesswork and making things hook up right; I don’t make clothing so much as just decorative items that don’t require exactitude), and I think it is so far pretty good. The only thing that stopped me from finishing the sewing part last night was that I ran out of bobbin thread