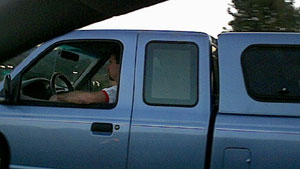 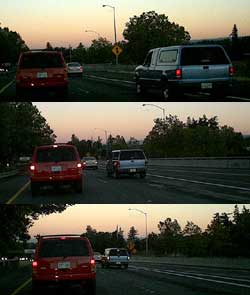 I got home last night and Jenn was working with the new sewing machine I bought her for her birthday. She’s making some pajama shorts or something. I went in the room to see how she was doing, and she was fussing around with some fabric, mumbling about the buttonhole foot on it. It sounded to me like she thought it was broken or something. She just couldn’t get it to work.

I started looking at the instructions, at which point she decided it was time to start cutting something and then get pissed off because I was instantly in the way, so I left and figured I’d look at it later.

She left for her meeting, and after a while I decided I’d check it out. I mean, how hard could it be? Don’t these machines do everything for you?

I picked up the piece of test fabric she had sitting there, and, following the instructions in the manual, proceeded to try three times to make a buttonhole. And you know what?

It is that easy. The machine does do everything for you and I got three perfect buttonholes - one on each try.

Let’s get a closer look at this, shall we?

Here are my buttonholes. Note that I am the Buttonhole Master.

Turns out that Jenn didn’t really follow all of the instructions, just most. Funny how you can’t just skip the steps you don’t understand or don’t “feel like” doing.

Reminds me of this one time I sent some instructions to one of my users on how to fix a problem he was having. He calls me back a few minutes later and asks how come step 8 isn’t working. I’m like, “Did you follow all the instructions?” and he said, “Yeah - I did step 2, then 4, then I went back and did 3, then 1…” You get the idea. I never thought I’d actually have to specify that you need to follow the numbered steps in the order they’re provided.

Remember the Space Pen I lost a while ago so I ended up buying a new one? Yeah, well, I found the one I lost. It was in my car, under the seat, between the floor mat and the metal track that the seat sits on. Since it’s dark down there, the track is black, the carpet’s black, and the pen’s black, I didn’t see it. But I dropped a quarter in there, and when I reached in to get it, there was the pen. So now I have two Space Pens, which isn’t a bad thing.

I posted my Underworld review yesterday, so I’ll tell you what I did this weekend today. Now that it’s already Tuesday.

Friday was the intern at work’s last day, so we took him out to lunch at Chang’s Mongolian Grill and signed this terrible shirt that Jenn’s grandparents got me for Christmas and gave it to him. The Worst Shirt Ever. And there’s another one, waiting here for the next intern. Yeah, I got two of those mothers.

After work, Greg and I went to see Underworld, the review for which I’ve posted already. It was decent.

Woke up the next morning to find that Chang’s had a negative effect on me all the way around. My stomach was rumbly and the apartment smelled of farts and garlic. I guess I woke Jenn up in the middle of the night by farting in my sleep (hehehehehe). I think I’d best lay off the Chang’s.

Saturday I went to the first Winter Hawks game of the season, and I hope that the season opener is indicative of what we can expect the rest of the season. Not only did they win and fight, but they also scored during the “Pizza Schmizza Magic Minute,” which means we all got free pizza. Doesn’t get much better than that.

While at the hockey game, I was talking to my friend Jerry’s daughter, Suzanne (who, by the way, is hot like Alicia Silverstone in Clueless), and I came to find that she didn’t know what funk music was. How do you describe funk? I named several artists, and she’d never heard of any of them. She’s 21, and I’m only 27, but that makes me feel old. Kids nowadays, man.

Sunday I went to see Bubba Ho-Tep at Cinema 21 with my friend Darren. It was a reasonably funny movie about Elvis in a rest home, fighting a mummy who eats the souls of old people. Sound silly? It was, but it was entertaining.

Yesterday was my sister Tai’s birthday, so Jenn and I headed over to my parents’ house for cake and ice cream. It was a decent family gathering. Tai said she was glad I was there, but was a little disappointed that I didn’t call her in the morning to say happy birthday. Two things on that: first, I don’t call anyone for holidays, or much anything else for that matter; second, I don’t remember getting any call on my birthday. Hmmm. Okay, then.

Sunday (the 28th) is Tori’s birthday (my other sister). But she’s in Utah, so no family gathering.