Of Tiny Cats and Camera Phones 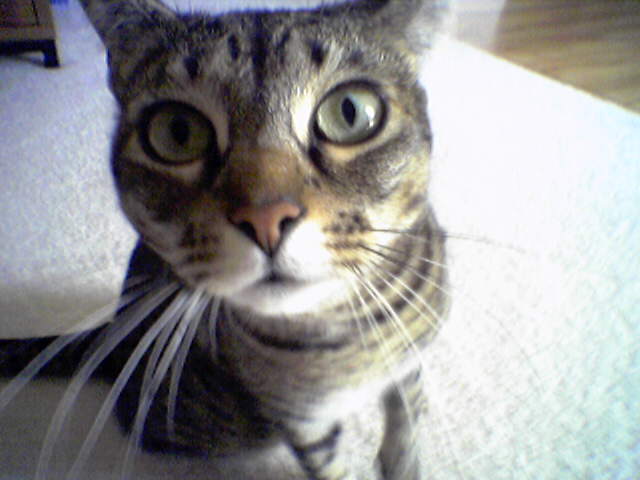 I was headed to the hockey game last night and noticed I had a flat tire before I pulled out of the garage. On further inspection, all four tires were totally bald. Time to get new tires.

Went to Les Schwab this morning and picked up some new tires. $681 later, I was on my way to work. (Admittedly, I bought some pretty decent 65,000 mile performance tires, not your stock generic tire.)

Saturday morning at 8:00 my dad showed up, and by 8:30 we were starting the first episode of the second season of 24.

Over the course of the rest of the day, we watched, back to back, the entire season.

We took breaks, of course, to go get food, sit and talk, and so on. We lost a little time on those, but considering there are almost 20 minutes of commercials in every episode when it airs, it only takes about 16 hours to see all 24 episodes.

Dad left a little after midnight, skipping out on the final four episodes of the season (those were the ones he had originally seen when they aired; he hadn’t seen the rest), but I watched them, finishing up a little after 3:00a the next day.

It was a blast. I love hanging out with my dad, and getting a chance to watch a great story over the course of a day with him gave me the same feeling that you have when you’re a kid having a sleep-over with friends: sort of giddy… and a little sad when it’s time to go home.

We ate junk food (donuts, candy bars, pizza, pop… you name it) and did nothing but watch the show. It ruled. No responsibility, no jobs, no problem solving. True decompression.

I noticed an interesting thing after finishing the show. After spending basically a day with the characters in the show, you get to know them and like them. You see how they interact with each other, you see how they live their [fictional] lives. After that day with them, it’s hard to believe they don’t exist, and it’s hard to see the story end because they’ve become your friends.

That happens to me after reading a good book, too, and it makes me realize how people can get attached (and even lose touch with reality) after watching soap operas and other long-running serials for years on end.

Then again, I don’t know it would have happened had I watched on a week-by-week basis the way it’s broadcast. As it was, I had a hard time keeping track of all of the subplot threads going on and occasionally had to watch the “last time on 24” summary at the beginning of the show to keep it all straight.

It also makes me wonder what would happen if I watched some other show back to back like that. Alias, maybe. I already know those characters; would it have the same effect, or would it anything change at all?

That’s right! The entire first week of November, my vacation in San Andreas begins. I will be sitting on the couch, eating junk food, sitting next to my 16-pound fat cat (who likes to lay around next to people playing video games - it’s my Tubby Game Cat), doing drive-by shootings and robberies. Living the life of Grand Theft Auto.

Check this out - it’s a guy who makes sort of ambient techno using a Jew’s Harp and a signal processor. It’s actually pretty cool.