Having a Positive Negative Impact

One of the guys in my group had a dream last night that I was mad at him for wasting time on frivolous programming efforts and not spending time on the things we need to deliver.

That’s how I work, baby. I work my way into your subconscious, like George Costanza. A positive negative impact of sorts.

I don’t normally go for the electric version of health products. I use a non-electric razor. I don’t blow-dry my hair. You get what I’m saying.

I did give in and buy an electric toothbrush, though, at the behest of my dentist. Oral-B CrossAction Power.

It’s been time to get a new head for a while now, but I can’t seem to find any replacement. I’ve tried for like a month now.

Turns out there’s been a recall on them. New heads won’t be available until January. Unbelievable. I think stores should post that stuff so people like me don’t wonder how come nobody sells them anymore. Or at least tell the employees so I can ask and don’t just get the, “I dunno… I guess we’re out of stock” thing.

Thanksgiving was great. I didn’t get Chinese food the way I thought I was going to because the place was closed, so I ended up with Lloyd’s Barbecue Beef, which is an excellent second choice.

Jenn, of course, was at her grandma’s house, so I had the place to myself with the cats - some great time for a San Andreas visit. Over the course of the four-day weekend, I’ve now collected everything (all the horseshoes and oysters and everything else they make you collect) and have nearly finished the standard string of missions. I haven’t yet stolen all the cars or done all of the sub-missions (mining at the quarry, etc.), so I’m still not close to 100%, but I’m on the way.

We had three hockey games to go to, none of which really, truly held my interest. It’s like watching a battle of mediocrity on the ice. There’s competition, there’s scoring, but it’s not exciting like it’s been in past years. Sometimes the opposing team is good and makes some nice plays, but by-and-large, this hockey season (for almost all the WHL teams) has been more for those folks who like low (or no) scoring games and a lot of battle without much fruition. I’d rather have a higher-scoring game with lots of cool plays and a couple of fights. If the team can’t connect a pass, though… I dunno.

Going to three games in a week is a drain, especially when you’re watching hockey like this. It makes me not want season tickets. The only redeeming factor left is that we sit with friends, and I like seeing them and hanging out, so we still go. If we sat next to crummy people, I’d probably skip next season.

Saw The Day After Tomorrow last night. Eh. The effects were cool, but the plausibility of the story was iffy at best. I was expecting utter trash after I talked to some folks, but it wasn’t that bad. It didn’t cost me anything, and I didn’t feel like it was just two hours I’ll never get back. That said, I really didn’t care much about the characters and there was no way they’d have survived that cold, so the suspension of disbelief just wasn’t there for me. Plus, I’m not big on natural disaster films. I give it two or three out of five.

And so, back to work. I’ve got my Christmas music on my iPod and I’m ready to go. It wouldn’t have hurt my feelings to have won the lottery this weekend, but I guess since I gotta pay the bills, I’ll go to work. Work’s sorta like hockey in that sense - if I was surrounded by crummy people, I’d consider bailing. But I’m doing some good stuff there, learning new ways to do things, and I’ve got some good friends there, so if I gotta work, it’s a good place to be.

Some folks get their 15 minutes by starring in movies, writing books, or singing songs. In my circles, you get your fame from being featured various spots on the web.

My good friend and co-worker, Greg, got himself featured on Engadget this morning. It’s cool to see folks you know, particularly friends, with their name in the proverbial lights.

I don’t get much in the way of web-based fame. I think my link on the CodeRush community site is about the closest it gets.

Maybe I’ll have to work a little harder at that. 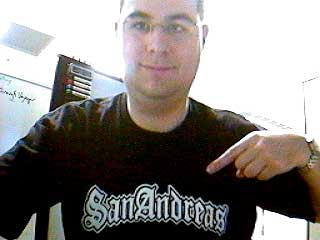