Full source and compiled executable available. Have at it.

The television repair guy came to my house and it turns out I need a new tube put in the TV. The offical diagnosis was “unable to hold purity - purity slips out of alignment.” My diagnosis is “colors fucked up, picture not straight.” Regardless, it needs a new tube. Next step is that they’ll call me to schedule a pickup time.

I got some new shoes, which I’m pretty stoked with. They’re Nike Shox TL2, which means I’ve got springs the entire length of the sole of my foot (which, if you’ve seen these feet, is a lot of springs). 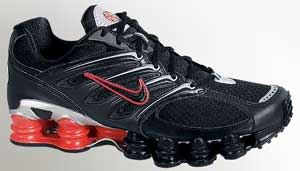 I let the Roomba run its course in the living room last night, at the end of which it located its charging station and docked itself.

I wasn’t going to empty the dust bin on it since I had already vacuumed that room earlier in the day, but Jenn wanted to see what it picked up, if anything.

Either we have really cheap carpet (which is probable) or the vacuum we’ve got doesn’t pick much up. There was all sorts of carpet fuzz and gunk in the Roomba’s dust bin. I was impressed - I mean, hit the button, let ‘er run… and that’s it.

So far, I’m loving it. The real test will come this weekend after a full week of tromping through the house (we vacuum on weekends). We’ll see how the ol’ Roomba holds up.

I always find stories based on the lives of famous figures to be interesting, and when the figure is Ray Charles, it only gets better. Ray tells the story beautifully.

Through the movie you learn that Ray had a hard life. Sometimes he was an asshole. Sometimes he was a loving father. He overcame drug addiction. In the end, he brought his own unique style to music, and it’s something that has impacted the world. Watching it happen is an emotional experience.

Jamie Foxx does such a fabulous job as Ray Charles, you could swear it is Ray. You even see in the credits that Foxx sang some of the songs. I’d never have guessed. (I caught his performance on the Grammy Awards last night, too. For a guy I’m used to seeing in a comedic capacity, he sure is multi-talented.)

The supporting cast all did a great job as well. It was especially nice to see Curtis Armstrong in something again. (I recognized him from his voice, but otherwise would never have guessed it was him.)

I hope it wins some of the Acadey Awards it’s nominated for this year; it certainly deserves to.