We got this voicemail last night from Dennis’ Seven Dees, the folks we contracted with to get our sprinkler system put in. The message was, “Tomorrow morning at 8:00 a crew will be out to start your irrigation system project.”

I just signed the contract a couple of weeks ago and the guy I talked to said they were booked five weeks out and they’d let me know when they’d be coming. I was under the impression I’d need to call the utilities to get them to mark their buried lines, get permits from the city for the development, and do some additional prep work. I’ve done none of that, and that was sort of worrisome.

But looking out the window… someone has already come along and painted the utility markings. What the…?

Jenn is off today (having to work this weekend) so she was there this morning when they showed up and let them know that we hadn’t prepared. They had taken care of everything. They called for the utilities to be marked, they got the required permits, and they’ll be done by Wednesday.

She sent me a text message mentioning how organized they are, too, which is cool. It’s always nice to see an organized, professional team at work.

It’s costing me a bit - $5600 for the whole job - but the majority of that cost is due to the funky shape of the yard and the placement of the water pipes (there’s a lot of extra work that will have to be done to get the water where it needs to go). Could I have gotten it for cheaper? Maybe, but I got a couple of quotes and they all came in around the same ballpark until you really started cutting corners or omitting full sections of the landscaping. Could I have done it myself? Maybe, but I don’t know the first thing about sprinklers, and I’m sure there’s more to it than I’m willing/able to grasp. There’s a reason people get paid to do what they do - I don’t expect anyone off the street to be able to code like I do; it shouldn’t necessarily be expected that anyone off the street can just come in and do a sprinkler system.

On the other hand, with things like this, I’ve found you really get what you pay for. It might sound expensive, but you don’t have to fight with the pipes, dig the trenches, wire everything up, calculate where the sprinkler heads will go… and having the parts and labor warranty doesn’t hurt, either.

That “you get what you pay for” lesson has been learned by Jenn and I several times over, and much as we’d love to cut corners and cost on things, we usually find it better to save up for a little longer and make the investment in the higher quality product which is inevitably more expensive. (Which isn’t to say “more expensive == higher quality” - just that if you want a decent product or service, you really need to be willing to pay for it.)

I’m anxious to see how far they get in a day. And I’m stoked to get this thing in - the yard is really starting to look like crap, and it’s mostly due to the inability of us to get the water where it needs to be. Once this bad boy’s in, it’s time to call in ProGrass to come in and do some soil treatments and fertilization. Then it’s going to look gooooooood.

The new version automatically rewrites links on the page that match URLs for contacts you have defined. This makes it zero-effort to implement - just link to various contacts, and their contact card will automatically be associated with that link.

I’ve been on a mission for spare parts for this RC helicopter I got. A mission, I tell you! I found the manufacturer in China (good luck tracking that down), I called the store where my dad bought it… all to no avail. Spare parts don’t seem to be locally available, and shipping them from China directly in the quantity I’d have to purchase in would be more expensive than just buying a new chopper.

So… I guess it’s time for a new chopper. Maybe something just slightly higher-end, possibly a three-channel entry-level thing that has spare parts available. Looks like a trip to Tammie’s Hobbies is in order this weekend.

Just got wind that Kevin Downs of the NDoc project is removing himself from the development of NDoc, leaving no one actively developing NDoc. Further, that means there’s no NDoc 2.0 on the way.

That’s bad news in a lot of ways. First, I feel bad for Kevin since it sounds like he’s done a lot of widely used but not-directly-appreciated work and got a lot of abuse for not moving faster on NDoc 2.0. Second, that means folks who currently use NDoc in a lot of extended ways - via NAnt build scripts, in other automated utilities, etc. - are screwed for .NET 2.0 functionality. In a particularly personal bit of bad news, that means I’ve got to figure out what will happen with CR_Documentor

I guess Microsoft has some sort of less-feature-complete documentation rendering engine codenamed “Sandcastle” they’re coming out with that will generate MSDN style documentation similar to NDoc but in a more cumbersome-sounding process. It obviously won’t have instant NAnt support, meaning there’s going to be some hacking around to get that to work.

I feel like MS is showing up late to the party on this one. If you’re going to release a product, at least make it full-featured enough to be competitive with similar products. I’ve thought about writing my own blog engine for a while now and I wouldn’t release it until it did all the stuff standard blog packages do today; if you couldn’t leave comments, for example, it’s not a full blog package.

Of course, it will most likely become the de-facto standard with the vacuum that NDoc will be leaving. Which is unfortunate, but c’est la vie. 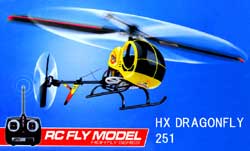 The kind of helicopter I have is an “HX Dragonfly 251.”

It’s looking like the only place online that sells the thing is in Japan. Hmmm. This is going to make finding replacement parts tricky.

UPDATE: The HX Dragonfly 251 is the equivalent of the Syma 9093 Dragonfly helicopter. You can get spare parts at Raidentech.