I’ve been using NDepend for a while – since version 2.7 – and each release is always noticeably better than the last. Version 4 last year brought with it some of the best stuff with CQLinq and seemed to focus a lot on enhancing the internals and technical usefulness. The latest version, version 5, focuses on the UI and the general user experience.

The NDepend site actually has a great overview of the new features, and Patrick Smacchia has a sort of case study explaining the UI enhancements, so I suggest you check those out.

The UI enhancements are immediately apparent when you fire up the application. 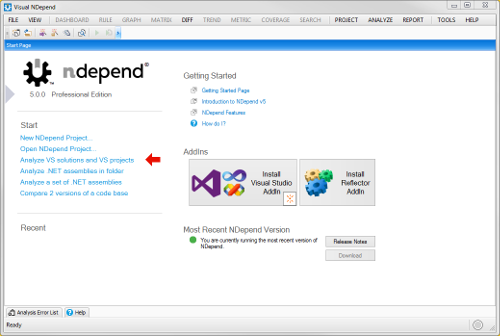 Everything is a lot cleaner and more modern feeling. You don’t realize how much of an impact that has on it until you’re actually using it.

Things are generally much easier to find and figuring out “what to do next” after running analysis isn’t nearly as challenging as it used to be. My complaint from version 4 about the UI being a bit confusing is pretty much gone. The updated menus combined with the dashboard screen (see below) have pretty well solved that issue.

The two coolest improvements that immediately caught my eye were the new dashboard and the update to the HTML report format.

On running the analysis, you are now presented with a dashboard screen that has several metrics and trend graphs. Particularly from a long-term reporting standpoint, these trend graphs are fantastic. You can track how the application is changing over time and very easily communicate that in a visual format. (My screen shot below doesn’t show trends because I only ran it once but you see where they’d go and so on.) 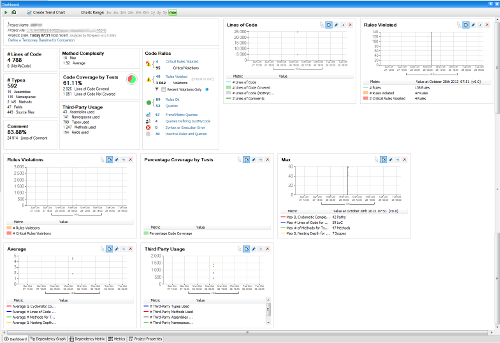 You can customize that dashboard to your heart’s content – every graph has a little set of editing buttons that let you customize and the definitions for those are all stored along with the project.

The HTML report is now also much cleaner. It offers the same great level of detail, but the presentation is such that it’s not all on One Gigantic Page. 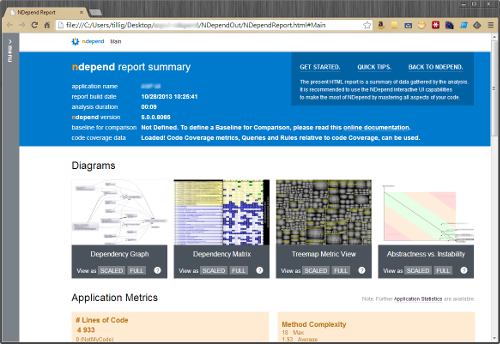 The navigation menu on the side slides out when you mouseover and that’s how you get to the detailed info. 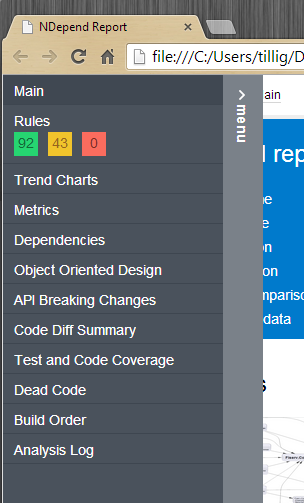 One really cool internal enhancement is that you can define what JustMyCode means so your queries over JustMyCode are more precise. You do this by prefixing your query with notmycode like:

That way when you query over JustMyCode you get a more specific set of results:

I mentioned to Patrick that it would be nice to be able to define “named code sets” in a similar fashion and reuse those in other queries. In my case, I have a fairly large application, but some of the application assemblies that I want analyzed shouldn’t be counted against the application in coverage analysis. There’s no way to exclude full assemblies from coverage reporting easily because there are several queries that define the metrics – you’d have to copy/paste the “where” clauses across all of them and keep them in sync. Instead, it’d be cool if you could do something similar to the JustMyCode thing where you could define a named set of code (e.g., the set of assemblies on which I want coverage analysis) and then reuse that named set in coverage queries – update the definition once, all the coverage queries get updated.

My number one issue with NDepend still persists to version 5 – you still can’t use environment variables in framework folder paths. Just as in version 4, this is sort of a showstopper when it comes to running NDepend in server farms as part of your build process where the Windows folder and Program Files folder are potentially not on the same drive on every server.

Regardless, NDepend 5 is definitely worth the upgrade. It’s clean and modern, much easier to use, the reports are easier to navigate, and it remains one of the more valuable tools in my toolbox. Head over to NDepend and check it out. The base of overview videos and documentation has been constantly growing so you can actually see it in action doing pretty much anything.

« Bonding Over Doctor Who
Command Prompt Here Generator - VS2013 Support »