I found I was running out of space with all of my DVDs and such, even after adding an eSATA port multiplier and a few 1TB drives. I only have one drive slot left, and while at first I thought I’d fill it, I realized that doesn’t leave me much wiggle room in the event of a real emergency where I need to do some fancy drive swapping. As such, I decided to replace one of the 500GB drives with a 2TB drive. The 500GB drive I took out will stand ready as a replacement for the system drive should catastrophe strike.

I started the upgrade with about 750GB free because I wanted to be sure there was enough free space to remove the 500GB drive without losing any data. 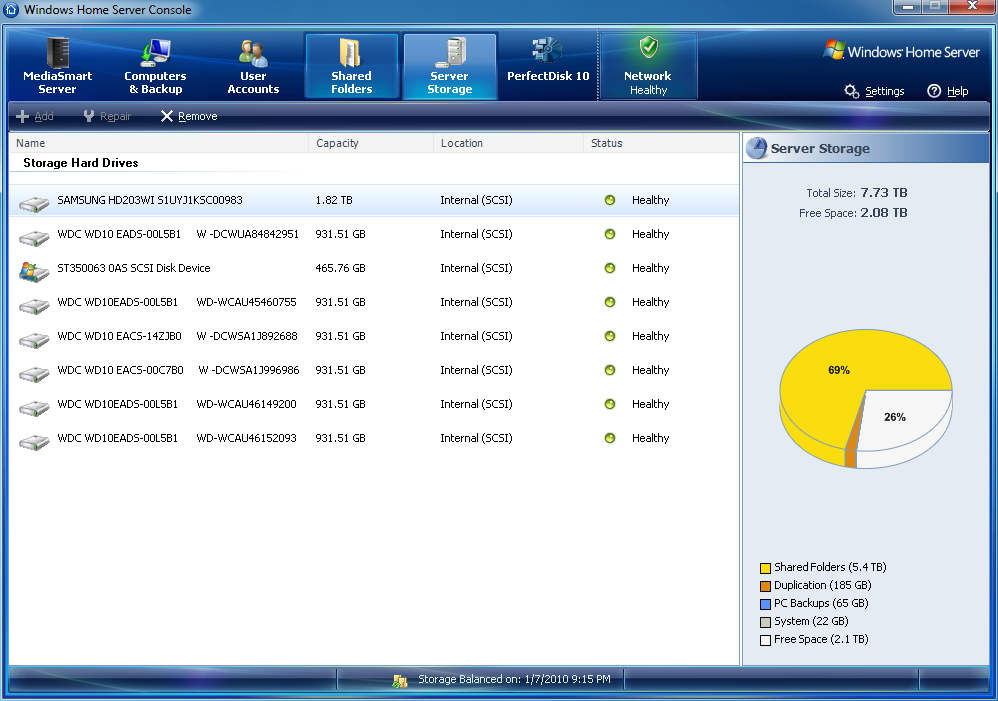 Given that I’ve figured DVD images run about 6.7GB each, that gives me room for another 300 DVDs before I run out of space. Of course, when I hit a bit over 1TB free, I’ll have to consider what my upgrade options are in case I need to remove a 1TB drive to replace it with something larger.

UPDATE 1/9/2010: Turns out I got a bad drive. The first night it was in I got a bunch of errors from WNAS.SYS telling me something about “VRM temperature too high.” Doesn’t make a ton of sense, but that’s what happened. Anyway, that first night it totally disappeared from the storage pool, as if by magic. The second night I decided to re-seat it (thinking “bad connection”) and run chkdsk on all drives. Got the WNAS errors again and a bunch of disk errors, so… back it goes. Most of my drives are Western Digital and the drive I tried out was a Samsung. Being a little technology-superstitious, I’ll probably get a WD drive as a replacement.

UPDATE 1/15/2010: I put a Western Digital Caviar Green 2TB drive in and I’m back up to 7.73TB. So far I’m not seeing any of the weird WNAS.SYS errors I was seeing before which leads me to believe I had a bad drive. Every other drive in the system, save the system drive, is a WD Caviar Green drive, and I’ve had good luck with them, so I’m hoping my luck will hold.

UPDATE 1/16/2010: I see the WNAS.SYS temperature warning errors again, but it appears that so many in succession is generally understood to be some sort of bug in the driver rather than a health issue. The system didn’t restart itself or anything, so I guess I’ll just watch it. One thing I found while I was looking for the solution to the WNAS.SYS issue is this article over on the HP site that says how Samsung SpinPoint drives will suddenly “disappear” from the system and it’s a compatibility issue. As it turns out, that’s the type of drive I ordered that failed - a Samsung SpinPoint 2TB. Looks like the WNAS.SYS error and the drive failure were unrelated. I’m still watching how this WD drive behaves. I can ignore false errors in the logs (though it’s fishy that they show up when I add a 2TB drive - maybe I’m crossing some size boundary that causes the bug to show up?), but if a drive “disappears” on me, that’s trouble. I’ll probably wait a week or so before putting any additional info on the server that might make it so I can’t remove the drive.

UPDATE 6/16/2010: Be careful of using the WD Green drives. Only some model numbers appear to be good.