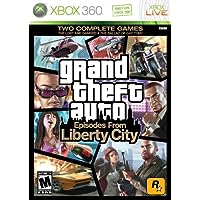 Over my holiday break I spent some time playing Grand Theft Auto 4: Episodes from Liberty City. I’m not quite finished with it, but I’ve gotten far enough that I have an opinion.

Let me give you a frame of reference so you understand where I’m coming from.

I’m a huge Grand Theft Auto fan. Whenever a new Grand Theft Auto comes out, I take a whole week off work and dedicate the entire week just to playing the game. I get the expensive edition with all the bells and whistles. I finished GTA4 with 100% completion. I am, as far as I can tell, the target market for Grand Theft Auto.

Given that, when I heard there were expansion packs coming for GTA4, I was really excited. That, the holiday season, and one of those frozen buckets of daiquiri and I’ve got the most awesome cheap vacation ever. They released it as separate downloads or as a self-contained disc (same price), so I got the disc (love that Xbox DRM), the strategy guide, and when vacation time came around, I was in.

There are two expansions: “The Lost and Damned” and “The Ballad of Gay Tony.” I have very different feelings on each expansion.

In “The Lost and Damned,” you play the leader of a biker gang. You go on several missions to fight rival gangs, to get money for your own gang, and to help out friends. The missions themselves are fairly standard GTA fare, but they’re fun. I was partial to the gun battles (there were several) since many were fairly large scale with lots of enemies. A couple of missions were difficult, but I never really struggled with them - I might have to run them two or three times, but I could get them. The feel of the whole thing was good and got you involved with the story. Very nice.

I did not play “The Lost and Damned” through to 100% completion. There were some race missions that were optional to the completion of the story and I’ve always absolutely despised race missions in any of the Grand Theft Auto games. Driving around the town at my own pace is fun, but the driving really isn’t the goal in my opinion; it’s a means to get you somewhere, so not having pressure when driving is key. The driving controls are pretty sloppy on most vehicles and shooting while driving takes some serious getting used to. Anyway, I didn’t do the races because I don’t like the race missions, but I suppose I could have if I really cared.

So, overall, I liked “The Lost and Damned.”

After “The Lost and Damned,” I moved on to “The Ballad of Gay Tony.” In that, you play a guy who runs some night clubs with a business partner, Gay Tony, who is always getting into trouble and you get to bail him out. I’m not done with it yet, but this one is where I start having some fairly strong opinions.

I also like the addition of the “base jumping/parachuting” activities. It reminds me of Grand Theft Auto: San Andreas, which was a really fun game.

That said, I’m actually pretty irritated with “The Ballad of Gay Tony” and here’s why:

They grade you on how well you did on each mission.

Whenever you complete a mission, you get this statistics screen that pops up and tells you percentage-wise how well you did. There are some [seemingly] arbitrary criteria that you’re supposed to fulfill to get 100% completion. Of course, you’re not told what the criteria are until after you’ve finished the mission, so there’s problem number one.

The real problem is that many missions are unreasonably difficult.

As it stands, on most missions I’m having to run them three, four, five times to even complete them. While I’ve played all the Grand Theft Auto games and invest quite a lot of time in them, I’m not 14 years old anymore. I don’t have the time or inclination to run, re-run, and re-re-run missions to get 100% on them. I’m not interested in (and possibly not even capable of) developing the Nintendo-timing snap-reflexes required to fulfill the criteria you won’t tell me about until after I’ve run the mission six times and barely completed it.

Not only that, but “grading me” on how well I did is a huge distraction. I’m not in the “sandbox environment” anymore, where I can do whatever I want or solve the mission however I see fit. Now I’m more on rails, having to do things within a predefined time limit using a specific set of resources in a specific way. That totally defeats the purpose of the thing, in my opinion, and makes it feel less like I’m my own character in my own environment and more like… well, more like I’m just playing a standard platformer. If I wanted that, I’d get the standard platform game and move on.

I won’t even get into the fact that you can’t save wherever you’d like to in GTA games - you have to save between missions and you have to go all the way back to your safehouse to do it. If you’re in the middle of a really difficult mission that takes 20 minutes to finish and you get killed at the 19th minute… well, too bad. Get killed on the way back to your safehouse? Tough cookies. (They did implement an “autosave” feature in GTA4 so you at least don’t lose your progress if you complete a mission, but still.) Yeah, that’s how it’s always been, but it doesn’t make it right.

I won’t even get into some of the tedious missions they added like “Club Management,” where you’re supposed to help manage a night club and basically walk around from room to room and get forced to “scan the floor for trouble” by looking around with a thumbstick. Sometimes you even get to go run errands for people like escorting a VIP from one club to another. No, thanks.

“The Ballad of Gay Tony” has turned GTA from a game into a chore. I don’t want to compete with other peoples’ standings on how well they did on the missions. I don’t want to be pulled out of the sandbox environment. I don’t want to “replay missions” to see if I can improve my score. I liked the “pass/fail” that was going on before… but now that there’s grading and achievements attached to your “percentage complete” on the missions, I’ll never get 100% on this thing, and really, I’m not interested. And I’m not interested in tedious crap that just eats up time but isn’t actually fun.

Should that matter to Rockstar? Yeah, it should. I’m not interested in getting 100% because it’s too hard, but I am a completionist, too, so not being able to get 100% irritates me. It makes me feel like I’ve been ripped off because I bought a game I want to finish but really won’t be able to. It’s frustrating and irritating.

Yeah, you can argue that it’s all in my head and I’m not being forced to get 100%, and that folks who want that additional challenge now get it and I should just ignore it. I just have to question how many folks actually wanted that challenge and whether that group of folks is really the target market. Maybe they are and I’m alone. I sure hope not. I like my vacations in Liberty City and I hope I don’t have to find somewhere else to go.

Net result: Go for “The Lost and Damned” but skip “The Ballad of Gay Tony.”

I’d love to be able to give this feedback to Rockstar somehow but I’m not sure how. If you know, leave it in the comments for me.