When setting up my Windows Media Center solution the primary goal was access to my DVD movie library. Getting access to my music was a “nice to have” feature, but not really required.

Since then, I’ve figured out how to get iTunes music (AAC, M4A, Apple Lossless) to play natively in Windows Media Center, but my other DLNA media devices - Playstation 3, Xbox 360 - still couldn’t play that music because Windows Media Connect, the thing that Windows Home Server uses for UPnP media sharing, is an older service that doesn’t understand those formats.

Some folks have solved this by doing a sort of hacky upgrade to Windows Media Player 11 (which is not supported on WHS, but enables more file formats to be shared). One of my big goals with Windows Home Server (and my media center solution in general) is to not hack around on the thing. I want a polished, appliance-like experience. I want support. I really don’t want to have to mess around with tweaking this and fixing that just to get things working. I get to do that all day at work; at home I just want things to behave.

To that end,I’d all but abandoned the idea that the Xbox or PS3 could share my music until I foundAsset UPnP.

Asset UPnP is a Windows Home Server add-in that enables sharing of virtually every kind of music format out there. The really cool bit is that it can transcode formats that your player doesn’t support into either Wave, LPCM, or MP3 format so your DLNA player will understand them.

We Got ServedandHome Server Plushave some good discussions about the functionality of the server and how it works, at least for version 1.1. The Asset UPnP page also has some good screen shots showing how to set things up and what your options are. I won’t duplicate all of that here.

Setting up Asset UPnP in its default configuration will enable DLNA media players and renderers to access the files that Windows Media Connect previously didn’t share because it didn’t understand. The power (and coolness) is in Asset’s “Force Streaming” function, which decodes audio formats before streaming them to the player - that enables

What I will tell you is how to get things working with your Playstation 3 and Xbox 360.

Get your metadata in order. Asset UPnP makes a lot of use of metadata tags - artist, album, album art, etc. - to generate the hierarchy you can browse to get to your music. Getting this right will make it far easier to find your music through your player.

Install version 2 of Asset UPnP. As of this writing, version 2 is in release candidate status but it has some features and bug fixes that version 1.1 doesn’t have that you’re going to want. I didn’t bother with version 1.1 and have found the RC of version 2 to be nice and stable. You can get the installer from the Asset UPnP page. Make sure you download the Windows Home Server version and not the standalone version.

Use the “Force Streaming” function for unsupported formats. You can get to the advanced configuration screen by seleting the “Edit Advanced Settings” button on the main WHS plugin control panel for Asset.

Select the AAC, M4A, M4B, and MP4 formats for iTunes music (that’s what I was working with). If you have FLAC or other music that isn’t supported directly by your player, select those formats, too.

Now the tricky part is to pick which format to stream the selected items in. For Playstation 3, select Wave. For Xbox 360, select LPCM. Unfortunately, Xbox 360 does not understand the Wave streaming and Playstation 3 doesn’t understand LPCM streaming. That means you can’t have both players working at the same time. At least, not right now. I don’t know if a fix is planned for a later release or not.

UPDATE 9/26/2010: Since the time of the original article, new versions of Asset UPnP have been released. If you are using Asset UPnP version 2, select LPCM streaming and it works with both PS3 and Xbox 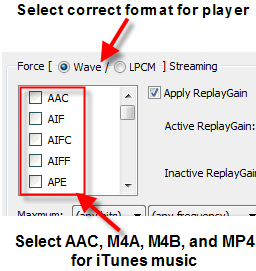 Once you’ve got that set up, Asset will restart itself and you should be able to use your player (PS3 or Xbox 360 or whatever) to play your whole music library. If that’s good enough, you won’t have to mess with adding codec support to Windows Media Center.

UPDATE 9/26/2010: I posted an article explaining how to get your iTunes or Windows Media Player playlists into Asset. If you’re interested, check out that article.