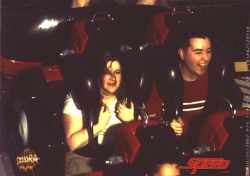 Last week, my parents, Jenn, and I all packed up and headed down to Vegas for three days.

I’ve been to Las Vegas a bajillion times now but it’s always different and there’s always something new and fun to check out, so I love heading down there.  (Granted, it’s a little hot for my taste, so while it’s a nice place to visit, it’d take a lot for me to want to actually move there.)

We stayed at the MGM Grand and the night we got there we went to KA.  It’s the second time I’ve seen that show, but it was just as spectacular as the first.  Once again, front row center tickets, and well worth the price of admission.

We took full advantage of the Las Vegas Monorail, even having a stop right at our hotel.  If you head down there, you’ll find the $9 day ticket well worth the money.  Of course, that didn’t stop us from walking our asses off and getting all grumpy because of the overall pain of one-foot-in-front-of-the-other.  At the end of the second day, we were just about dead and Dad just had to go to one last tchotchke shop to pick up this ridiculous tiny “Las Vegas” sign that, as it turns out, they sold at the gift store at our hotel.

On the other hand, how can you pass up a trip to go shit shopping at the World’s Largest Gift Shop?  You can’t say no.  You just can’t.  Even though it’s sort of like seeing all of the stupid tourist traps at the beach all in one big building.

While we were down at that end of the strip, we stopped in at The Sahara and rode “Speed: The Ride.”  It’s a roller coaster only 40 seconds long, but it’s a hell of a 40 seconds and worth the $10 to ride.  Jenn, Dad, and I rode that and got off the train all weak-legged and wobbly.  Good times.

After all was said and done, we got back home safe and sound, ready for another trip down there.  I think we might go again in February for my friend Adam’s birthday.  We’ll have to see.

To close - a picture of me and my parents outside the Treasure Island: 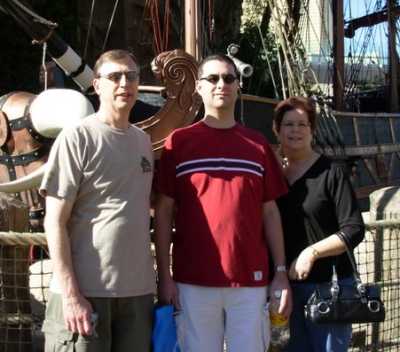