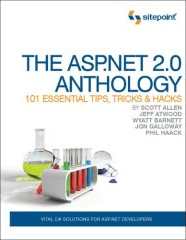 I just got through reading The ASP.NET 2.0 Anthology and I have to say, I liked it.

Anthology is a “cookbook” approach at showing different tips and tricks for working with ASP.NET 2.0.  If you’ve never set foot in ASP.NET land, this isn’t for you - it’s not a “newbie trying to learn ASP.NET” book.  It’s more of a “moderately experienced ASP.NET developer trying to sharpen the saw” book.

The voice of the book is fairly informal, which makes it nice - like you’re learning tips from a friend, rather than being dictated to.  Even some of the code snippets - which are shown in a nice, easy-to-read format - inject humor (watch for the Office Space references in the “Working With Email” chapter).  It made the book really easy to get through and understand.

The book covers a large range of topics, from error handling to membership and role providers to form validation.  What was a pleasant surprise to see is that it covered a lot of things many other books don’t, like project format, source control, and usage of popular third-party libraries (e.g., log4net and SubSonic).  There’s discussion of non-ASP.NET issues like design patterns and practices, data access layer usage, and basic SQL Server query optimization - things that a reasonably experienced ASP.NET developer bumps into on occasion but may not have had time to delve into.  It even addresses differences for users of the Visual Studio Express Editions, who normally get sort of “left by the wayside.”

There were really only a couple of minor issues that I found with the book.

First, there’s a chapter in there called “.NET 2.0 Core Libraries” that looks as though it’s intended to give an overview of, well, the .NET 2.0 core libraries… but in the 30 pages allocated to the topic you can barely scratch the surface, so it generally comes off as slightly schizophrenic, hopping from topic to topic.

The other issue I found is that there are some surprisingly good “nuggets” of information that seem misplaced and, in some cases, outright hidden, in the book and deserved a little more time in the sun.  For example, cross-page postbacks were sort of hidden in the “Component-based Development” chapter and asynchronous pages were hidden in the “Working With Email” chapter.  Interesting and valuable information that just sort of felt ”out of place.”

Overall, the content of the book far outweighs any of the minor organizational problems you run into.  If you’re looking for something to learn from and spark ideas of ways to make better ASP.NET applications, this is a great book.

[In the interest of full disclosure: I was sent a review copy for free from one of the authors, Jon Galloway.  Thanks, Jon!]