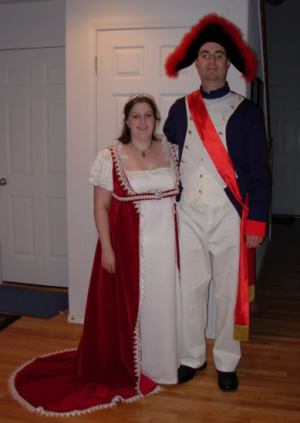 As usual, we both made our costumes.  Jenn made the dress and cape/robe and I made everything you see but the hat and shoes.  It was quite the effort - more than I anticipated - and there were a couple of all-nighters pulled to get things done.

Then, of course, I had to go and stain my pants in the chocolate fountain at the party, but that’s another story.

The effort paid off - I got the “Honorable Mention” category at the company costume contest.  And had a hell of a time at that party.

When I told people I was going to be Napoleon, the conversation was almost always the same.  In fact, here’s a [near] verbatim transcript of how every single one of them went:

Person: What are you going to be this year? Travis: Napoleon. Person: Dynamite? Travis: No, moron, Bonaparte.  It’s unfortunate for you that a small-scale cultural icon has overtaken an entire period in history. Person: Aren’t you a little tall to be Napoleon? Travis: Because I haven’t heard that one before.  Thanks for bringing that to my attention, though, because I’d never have thought of it! Guess I’ll have to walk around on my knees or something because you can’t get past my height but the first Napoleon you thought of was Dynamite. Person: …

The level of dripping acid in the conversation was, of course, adjusted based on present company, but you get the idea.

Not sure what we’ll be next year, but we’ve got some ideas.  It was nice to have costumes that “went together.”  Usually we just do our own thing.  We’ll probably try for similarly-themed costumes again next year.