Got home Friday after work to find my neighbors were in the fucking fire lane again.

Other than that, didn’t do much Friday night. I rented, um… I don’t even remember. Oh, wait - it was Malibu’s Most Wanted, which was reasonably funny, but I’m glad I only paid a buck for it.

Saturday was quite the day. I went down to Fry’s Electronics and picked up some CD cases for my DVDs. We had our DVDs on a bookshelf but ran out of room, so we decided it was time to put them into binders. I chose CD binders instead of DVD binders because of the cost - I have about 300 DVDs, and most DVD binders only hold 40 discs with the paper insert things… which means I would need like eight binders to hold everything, whereas I only need four of the CD binders and I still have plenty of room to grow. Of course, I miscounted the movies the first time around and ended up having to go back to Fry’s on Sunday to get another binder. But I’m getting ahead of myself.

Saturday afternoon was Jenn’s parents’ anniversary party at the local Masonic lodge. There were no fez-wearers, which I was disappointed by (though should have expected), and the “party” itself was more of a calm social gathering with food involved. Nothing too much. I did notice a couple of things I thought interesting, though.

First, I realized that at these sorts of gatherings there is always a “grandma” entity who sits semi-alone wearing those gigantic black sunglasses, and there was the token sunglass wearer at this party, too: 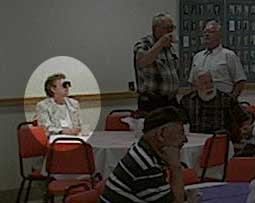 Second, there was this guy in the back who was wearing quite the interesting “American Flag” shirt. “Fashion Police! Pull over!”

We saw Jenn’s grandparents there, which was nice, and they gave Jenn her birthday gift since Jenn’s birthday is on Tuesday (tomorrow). The thing is, these grandparents are notorious for the… interesting… gifts. For example, the gift wrap is always re-gifted / recycled. Looking at the top of Jenn’s gift, you wouldn’t notice, but flip it over… 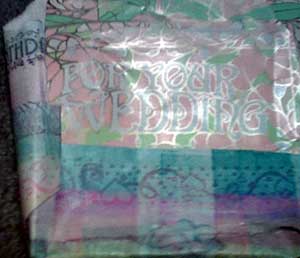 …and we see there’s a little bit of wedding wrapping paper in there. 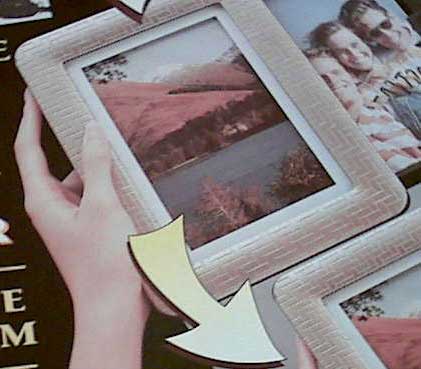 Inside that package we found a frame that allows you to “magically” swap your pictures in it like an album. Check the close-up on that frame. Like the plastic wicker look? So did we.

Jenn also got a wool blanket (in a Christmas box marked “To Jim From Louise”) that has probably been in someone’s attic for 30 years (the stink was incredible). Navy blue with snowflakes on it the size of dinner plates that have been cut out and sewn on. We think we can redeem that one by trimming off the snowflakes and giving it a thorough washing.

Sunday Jenn and I washed our cars (it’d been a while and they both looked terrible) and watched View From The Top with my parents. I made that second trip to Fry’s to get the last binder we needed and I studied for my next test.

Speaking of my next test, I’m not sure about how well I’m going to do. They refer to things I’ve never heard of, and it’s all case study sorts of things (you read a case study then answer questions about it). But it’s not even entirely logical. Here’s an example question with all the background info you’re given:

Events Plus (the company you’re contracting with) currently books 5000 events per month using their existing booking system. You’re creating a new system for them. This new system should allow multiple rate schedules for each event. Most events should have fewer than 20 different rate schedules associated with it, and rate schedules should only change two or three times per event.

Now when I solved this, I figured it this way:

Notice how that’s not one of the choices?!

The way THEY calculate it is:

Huh? Why are they calculating how much storage is for the rate schedules themselves? That wasn’t the question. And when they calculate for the audit trail records, what happened to the annual growth? And why is the annual growth averaged over two years and not compounded like annual growth is supposed to be? And I thought each rate schedule could be changed 3 times… it’s 3 times TOTAL?! ARGH!!! (You might think I shorted you on the info I provided in the question, but I didn’t; that’s seriously all you get.)

When you look at the “References” section on the practice test to see what you can study to figure out how to answer this, it says,”References: General Knowledge and Information – None.” Gee, thanks.

Anyway, all the questions are ridiculous like this. I don’t know how folks pass these things, since there’s no logic to me. Plus, if you have any questions in the real world, you can make a quick phone call and find out what someone meant. They expect you to make assumptions on incomplete information here and to make the same assumptions that they do. What a load.