I was going to write about this one yesterday but forgot. I remembered yesterday evening on the way home.

It rained yesterday. The weather report had called for rain (“chance of showers” usually indicates “it’s gonna pour”) for a week.

On the way to work, I saw this guy driving a convertible Mazda Miata with the top down. It was totally raining, as the weather report said it would. That got me thinking. Either that guy was a frickin’ moron and decided to ignore the fact that the sky was all clouding that morning, or he was utterly dedicated to having his top down that day, come hell or high water.

Another thing I thought about last night on the way home: hip-hop music.

I hate hip-hop. There’s something about the way they can’t decide on a tempo or the way everything is so utterly ebonic that just turns me off.

However, I like hip-hop that features clarinets. Like Blu Cantrell’s Hit ‘Em Up Style and Dani Stevenson’s Yo, Yo, Yo. I’m not sure why I figure those songs are better, they just seem to be more catchy or something. Almost like there’s some implicit amount of class in the song if they can squeeze a clarinet into the mix. Maybe I just like clarinets.

American Idol last night rocked. I’ve been waiting for them to get a little more contemporary with the tunes, and they finally did. Nikki also finally found her niche, which is good, because based on last week’s performance I’d have voted her off. Now I’m thinking Justin needs to go. The best is still Kelly.

Going Off the Rails

Jenn and I were talking last night about, well, nothing in particular, and I took one of my random sidetracks as usual and she wondered why I had said something I did and how my train of thought had reached it. Stopping to think about it, I realize that I have very quick, very divergent trains of thought when it comes to conversations, and most of the time it has to do with a pop culture reference.

For example, this morning in the car I was listening to Kylie Minogue’s Fever album, to the song Love at First Sight, and I suddenly wondered what ever happened to Crazy Daisy Ed…

How did I get there? It went something like this:

See how that works? That one was pretty simple. It’s sort of like “Six Degrees of Kevin Bacon” - any thought can be connected to any other thought. Just like that.

I framed my Bières de la Meuse print last night using a frame I had been trying to find a use for. The frame was 18” x 25” and the print is 18” x 24”, so I had to do a little trimming. The frame is metal, but I have this keen little saw and mitre box that worked just as well on metal as it does on wood. Yay, me! I didn’t quite make the cleanest cut on one of the frame pieces, so I had to Dremel it down… but I think I either used the wrong bit or maybe just went a little too hard on it because now there’s melted metal all over the bit and I’ve gotta get a new one. Oh, well. It was something to do that wasn’t watching television, so I can’t really complain. Plus, the picture looks really good in the frame, so all’s well that ends well or something like that.

I was watching Jay and Silent Bob Strike Back last night and started to realize that movies totally shape the way I speak. I’m not sure if I actively try to change to speak like movies, or if I just sort of pick up on little phrases, but I know that there are phrases and patterns I pick up from watching these things. Now that I think about it, it’s usually more phrases than anything. For example, if someone has a collection of items and asks me which one’s mine, I’m hard pressed not to answer, “Mine’s the one that says ‘bad mother fucker’ on it.” Describing a chaotic scene? “Dogs and cats living together…”

I’m not sure I can control it. Maybe I don’t even want to. I guess I assume it makes me a more interesting person to talk to (especially if you know which movie I’m referencing) but maybe it just makes me annoying.

The new season of Alias starts on September 29. I’m so looking forward to it. Honestly, more than any other show I watch, I’m waiting for Alias. Those bastards know how to keep you on the edge of your seat. Plus, Jennifer Garner. Yow.

And they have Alias trading cards coming out. Gotta be gettin’ these.

Oh! Jenn and I saw Signs this weekend. I thought it was pretty good. I can’t say it’s my favorite M. Night Shyamalan movie, but it was good. If aliens really were to invade, I think it would happen a lot like that, rather than the more commercial-yet-action-oriented Independence Day. I’d recommend seeing it, but don’t look for the traditional M. Night twist-at-the-end. It was just a straight-up, good film. I don’t know that I’ll be getting it on DVD, though. It was good, but I’m not sure that I’d watch it over and over. Give it a run, see what you think.

Watching my Buffy Season 2 DVDs this weekend I noticed that on disc 2, title 3 (“Lie To Me”), starting at chapter 5, 1:52 into it until chapter 6, 0:16 into it, the disc won’t play. I’m not sure why. It isn’t dirty or scratched. I tried it in my PS2 and the same problem occurred. So it’s not the player, it’s something wrong with the disc.

I went to Fred Meyer to exchange it, but after finding that they didn’t have it and then calling several other locations, I am going to have to wait until Tuesday when they get a new shipment in. I even tried the Freddy’s by work, but no luck.

I did, however, exercise my distinct lack of self control and purchased a Mucha print (Bières de la Meuse) that I’ve been wanting for a month or so now. Couldn’t stand it any longer. I don’t think we have any room for it at home, but we’ll see. If not, it’ll go up at work. Love the Mucha.

I also bought a ratcheting screwdriver with a set of bits because we have tools around work but… no one can ever find them. It cost me all of $6 for the thing, so I can’t really complain. Now I’ll have my own screwdriver, so I’ll always know where it is.

Jenn and I went out to dinner last night with Jenn’s friend Derek. During the conversation that ensued, I realized my life is pretty pathetic. It went something like this:

Jenn: Man, tomorrow’s Friday. Do we have any plans?

Travis: Not really. It’ll be nice to rest, though. I don’t feel like I get enough rest.

Derek: I know what you mean. What do you think you’ll want to do?

Travis: I dunno. Probably sit on my ass.

Derek: I love sitting on my ass.

Travis: Exactly. But… you know, I sit on my ass all day long, too.

Derek: Right. A hard day of sitting on my ass prompts me to hurry home…

Jenn: …so you can sit on your ass some more.

Travis: Wow. You know, I never realized it, but I’m really pathetic.

And it’s true. I sit all day long. Why do I feel so tired when I get home? I suppose you could chalk it up to stress and mental exercise, but you come tell that to this donut-like non-ab that I have surrounding my waist.

I borrowed my dad’s Ab Slide specifically for this reason - I need to remove the non-ab that has fastened itself to my frontal region. I’ve been using it fairly regularly (which is more than Dad could say), but I still have quite the lack of any muscle definition going on.

See, I have a problem with exercise: IT’S BORING.

Not just a little boring, a lot boring. Boring like watching the movie Gandhi. Plus I have flat feet and reasonably bad allergies, all of which point to not being able to really do much outside. I like swimming, but there’s no pool very close and I refuse to pay monthly to join a gym for such things.

Basically, I’ve come up with very few methods of physical activity that provide any feelings of positivity within me. I like swimming, bowling, roller skating, and riding bikes. That’s about it. So… Ab Slide.

I saw a little guy in an orange robe just burst into flame. It’s that hot!

Yesterday it was record heat in Portland. I guess it’s the first time in years it got over 100°F. It was also a record energy usage day. All I know is it was hot, and it’s gonna be hot today, too.

I went in this morning to get allergy tested so I can start up on the shots. As well as the medications work, I don’t want to be reliant on them. Jenn scared me by saying they were going to prick my back a bazillion times and it’d itch so bad I couldn’t stand it. That’s not actually what happened. What they did was they pricked my right arm a few times with the major stuff - dust, grass, various pollens - and left that for 15 minutes. Then they looked at the results for those and put a more specific set of allergens on my left arm based on the results from the right arm.

Turns out I’m allergic to dust and most pollens. Big surprise there.

It wasn’t so bad, though. I can ignore my arm itching; my back would have been a problem. Plus, the ones that reacted really quickly, before the 15 minutes were up, got treated with some anti-itch lotion immediately. No problem.

Now I go in again next week to get tested one last time. They’re going to mix up a couple of possible shot treatments and I’ll get tested to see if I react badly to them. If not, I’m good to go and I can start taking the shots weekly at a clinic much closer to my work. Excellent. 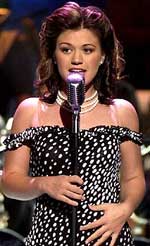 I watched American Idol last night and I must admit my opinion has changed as to who my favorite is. Up until fairly recently, I was a huge Nikki McKibbin fan. As time has gone by, though, and I’ve seen more of what the various contestants can do, I have to say that, while Nikki is fun and has a great attitude and is original, she just doesn’t meet the talent shown by some of the other contestants. She’s good, but not that good. (I’m sorry Nikki, but it’s true.)

My new favorite is Kelly Clarkson. She seems sort of next-door-girl-ish and is really, really good. After her performance during the “Big Band” show, singing “Stuff Like That There,” I was converted. That girl can sing.

I’ve also changed my opinion of the stupid hosts on the show. Not only do I really hate them, I hate them so much that I am starting to hate myself for putting up with them. I can’t imagine, right now, anyone I really hate more than them. Maybe Bin Laden. Maybe.