Some are legitimately clever, though. I think my favorite recent one had the subject, “Satisfy your woman you pindick.” That definitely makes me want to click it. Morons. People who spam people should be fucking shot.

Okay, so I found some GBA accessories I need to get…

By the way, I’m still loving my GBA SP. However, I’m realizing that, as simple as the unit is, that doesn’t make the games any easier. I’m still as bad at Mario Brothers games as I ever was. That doesn’t make it any less fun, though.

My chest cold continues. I thought I was getting better this morning when I woke up because the phlegm in my chest and throat started breaking up. By the time I got to work, it had solidified again in a war against me and my poor lungs.

I’m also feeling sort of tired and achey, almost like I have a fever but not quite. I’m generally feeling sluggish, and that’s not so good when you’re at work and people actually want you to do something. So I’m going to go home at 3:00p, which is in about an hour. That’ll give me enough time to get the rest of the stuff done that I have pending (for today, at least) and still allow me time to beat the rush hour traffic.

When I get home, I’m going to lay down and take a huge nap. Somehow a nap always seems to fix everything.

Maybe I need to get this book so I can convince my boss of that, too.

The weekend itself wasn’t terribly eventful, but I do have a lot of little, unrelated information to catch folks up on, so I’ll do that here.

Went to a local club Saturday night to see “an intimate show” by Josh Kelley and the band “Pay The Girl.” By my definition, “an intimate show” implies about 100 - 150 people. There were probably a good 500 people in this place. I’m sure the fire marshal would have been pissed - I mean, it was packed in. They started wheeling out chairs for people to sit in, but there was nowhere to put them so folks were sitting in the aisles and walkways… not good. We saw a few songs by Josh Kelley, but then the smoke in the place started severely hindering Jenn’s breathing (it wasn’t great for me, either) so we left before Pay The Girl came on stage.

Went to Fry’s Electronics during the day on Saturday and picked up a Platt heavy-duty polyethelene case with custom foam cutout to store my GBA SP in. I got the foam all punched out and all the parts are in the case with plenty of growing room in the event I get other accessories that need storage. I’ve always wanted one of those cases (sort of like the sniper rifle cases you see in action movies), but I never knew what I’d store in it. Now I know.

Sunday I didn’t do much of anything. Played a little PS2 with Jenn, hung out… that’s about it.

There’s a class action lawsuit against movie theaters for showing paid advertisements that run past the time when the movie’s supposed to start. The idea is that if the movie is supposed to start at 7:00, then it starts at 7:00 and not 7:30 because you, the captive audience, just had to watch 30 minutes of advertising. This is the greatest thing ever. I hate the stupid ads at the beginning of movies. One or two doesn’t bother me too much, but I’ve sat through seriously like 10 ads at a time. Fucking ridiculous.

I took a Star Trek Personality Test and it says I’m an “ENTP” and identify most with the character Harry Kim. I’m not sure I entirely agree with that, but whatever.

The Alias Season One DVD set is available for preorder from Amazon. Looks like it won’t be out until September, which is not soon enough as far as I’m concerned. Buffy Season Four is coming out in June. I should preorder both of those.

My instructor from the training class I went to a couple weeks ago is fairly new to the area of Portland. I thought about it, and there’s really not a simple guide to What’s Cool in the Portland, OR Area. There are tourist books and stuff, but nothing I really agree with. I am thinking I may have to come up with that and post it here. Then again, that’s a lot of work, so maybe not.

The new Kelly Clarkson album looks like it should be coming out April 15 and Justin Guarini’s should be out later this Spring. I’m stoked - curious to hear their music.

I think it’s interesting - if you look at this site (AmericanIdolMusic.com), they basically treat Justin and Kelly the same as opposed to one being the Idol and the other being runner-up. I think that’s pretty cool, actually, because it sort of implies a tie, which I think it was. They both rock. 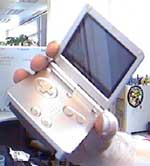 Got the call last night about 4:45p that my GBA SP was waiting for me at the local GameSpot. Picked that bitch up by 5:30p. Plugged it in, it was charged and set to go by 9:30p (the first time you charge the battery it takes a little longer).

It is everything I hoped it to be.

I’m now afraid I may be cheating on my Playstation 2 a little bit. This little baby is just super. It’s light, it has an ultra-clear screen on it… the beauty of portable gaming is without bounds.

I bought, at the same time, a copy of Yoshi’s Island, a Super Mario game with a sort of hand-drawn feel to it. It’s really cool looking. I haven’t gotten a chance to play it, but I think as soon as I finish up here, I’m going to take a little of my lunch break and bust it out. 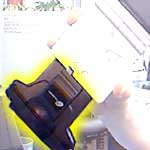 I also went to Toys R Us and bought the Nintendo e-Reader. I highlighted it, attached to my GBA, in the picture, so you can see how it works. It plugs into the cartridge slot for the GBA and has an optical reader on it. You get cards, sort of like baseball trading cards, with this ultra-fine “dot code” on the edges that this thing reads and then lets you play games. It came with Donkey Kong Jr. on a series of five cards. The reader is the only real expense; the game cards only cost like $5 a set. SWEET!

Anyway, loving it. Now I may have to get a GameCube in order to connect the two. I guess you can unlock stuff between the two when they’re connected. Brilliance.

I realized while on vacation - er, training - last week that I am having an affair behind Jenn’s back.

It’s true, and I’m coming clean about it right now.

I have a love affair with my Playstation 2. It’s an odd relationship where I am both its sugar daddy and its bitch. I cannot help but to play it, to buy more games for it, to give it its every need. When it calls for me, I must go to it. I must find that last hidden package, perform the entire set of unique tricks, get the ultimate weapon and/or destroy the enemy. It is a moral imperative, and I am unable to resist its siren call.

So much so that I anxiously await the arrival of its distant cousin, the GBA SP. I am counting down the days until March 23, when the official Nintendo release date has been set. I can hardly wait.