I finished up everything on my Halloween costume except for the hem on the bottom. It’s looking really good. I put buttons in instead of Velcro as the closure (a Velcro closure? how cheesy), and it makes all the difference. Thank goodness for automatic buttonhole makers on sewing machines.

I forgot to post this last week, but this guy at work has one of the original Minis. It’s very cool, and I’m admittedly jealous.

Friday I went DVD shopping with my dad and bought a crapload of stuff. I got A Christmas Story (20th Anniversary Edition), National Lampoon’s Christmas Vacation (Special Edition with ornament), The Osbournes Season 2, The Italian Job, The Matrix Reloaded, and Strange Brew. I also picked up Resident Evil: Dead Aim for PS2, a game that will work with my GunCon 2 controller. Jenn got the Lion King collector’s set. All in all, quite the haul.

I was going to write more, but I’ve taken like four hours to type this out because I’m fighting fires with our extranet domain controller, so I’ll have to get back to it later.

I noticed for the last couple of days that my DNS forwarding from www.paraesthesia.com to paraesthesia.mildperil.net was on the fritz. Not sure why, but it’s back now. That’s a Good Thing, because I didn’t want to have to fight the powers and move my DNS forwarding to someone else. What a pain.

My POP3 mail is back online, so I’m able to use Outlook Express instead of stupid webmail, and I’m mega-pleased about that. Took long enough.

My demo project at work is coming along well. I think I’m beating the expectations, which I try to do, and which I think people appreciate. I’m working off a 24 page spec document (each page has a screen shot of what they want), and I’m on page 23. Of course, page 24 is a bulleted list of things they didn’t have time to mock up screen shots for…

I’m getting HDTV from Comcast this weekend. Tomorrow morning the cable guy should be at my place to swap me cable boxes and provide my gateway to the world of the HD. Looking forward to that. High-definition Alias, here I come!

Apple finally released iTunes for Windows, and I couldn’t be more pleased. I was using ephPod (because Musicmatch Jukebox is a hunk of shit) and ephPod was giving me errors and refusing to sync my stuff. iTunes works perfectly (so far) and - best of all - it’s free. I’m digging it. At some point, I may even buy stuff from the Apple Music store.

The Pledge Of Annoyance

I got worked up at like 6:45 this morning, which I think is a little too early to be worked up. But I was, and it was all over the Pledge of Allegiance.

Apparently, there’s this guy in California who wants to ban the “one nation under God” part from the Pledge. He’s taking it to the Supreme Court, who has agreed to hear the case.

I have a problem with this.

I understand the guy’s an atheist. I understand that he feels we need to be tolerant of other religions in the country and so on. Fine, whatever. Here’s how I see it:

The United States of America was founded by Christian people fleeing from their country so they could practice their religion of choice. They decided that “separation of church and state” would be in the Constitution because they didn’t want the government to tell them what to believe in. I agree with that wholeheartedly, and I don’t think the government today should have any say in your religion.

That said, let’s look around the world. Last I checked, if you head over to Asia, you’re going to see lots of Buddhist temples and things of that nature. Are you offended by that if you’re not Buddhist? Nope. That’s part of their culture. Head over to India - I’m sure you’ll see all sorts of temples and things surrounding the Hindu religion. Offended? Nope - part of the culture.

Now let’s think about the culture of the US. Didn’t take long, did it? Because we haven’t fucking got any culture. We’re all so busy fighting to make each other accept every import culture around here that we haven’t developed an individual culture of our own. (Being self-centered tourists isn’t a culture, folks.)

It’s pretty apparent to me that religion is a part of any country’s culture. You really can’t have the one without the other, even if it’s not pushed by the government. The Pledge of Allegiance is one part of the miniscule culture the US has. The “one nation under God” is part of that, and it has been ever since they decided it would be a good addition in 1954. Should we take it out so we can be ultra-tolerant of everyone else’s religion? No. What’s the next step? Redo all of the money because it has “In God We Trust” on it? What about other countries? Should Canada take out the “God keep our land glorious and free” part of their national anthem? When does common sense kick in around here?

What really kills me is that it’s not even a denominational “God” - it’s not “one nation under the Christian God” or anything. Which, thus, implies that atheism, as it stands, is a religion - the belief that there is no god - and this guy is trying to push his religion through the government. Isn’t that just as bad?

That’s me - takin’ care of business.

Last night I worked for an hour or two on my Halloween costume and got it quite a bit further along. Hopefully I’ll be able to nearly finish tonight. There are a couple of alterations I want to make to the pattern (like putting in buttons or snaps instead of velcro for closure) which I have to figure out when I get it closer to complete. But that makes me happy - getting something done there.

I also watched the 1969 version of The Italian Job, which was pretty good. I had never seen it before, and now some of the choices they make in the recent incarnation make more sense. There are lots of behind the scenes things on that disc I need to check out.

I ordered a new computer today. P4 2.66GHz, 40GB HDD, 1GB RAM, nVidia GeForce4 MX 440 video card, DVD-ROM, Windows XP Pro, IBM ThinkCentre M50. All for $971, plus $10 shipping, which I can’t complain too much about. I’ve been meaning to upgrade for quite some time now, so I seized the opportunity. That should be here in a couple of weeks.

I worked some more on my new pMachine blog and I think it’s just about ready for prime-time. I hate putting things out there that are “almost done,” but I think it’s just about time to move on from GreyMatter and upgrade to a more complete blogging system. Better for you guys, too. I’m going to have to import all of my entries from GreyMatter to pMachine, which is going to be a bitch, but we’ll get there. Maybe this weekend if I take the time.

Or maybe I’ll be playing Time Crisis 2 instead.

I have a two-in-one traffic asshole for you today.

On Tuesday of last week, I was coming home and I noticed that my usual exit to get home there was quite the backup. Turns out there was a car parked diagonally across the right-hand lane of the two-lane exit. 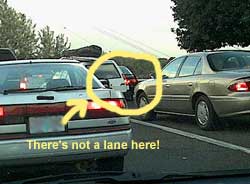 Normally I might feel bad for the guy whose car this was, since a broken down car is not fun. But then I thought, “You know, a nice person might have rolled the car around the corner into the emergency lane so nobody would be blocked.” That, coupled with the fact that the exit was backed up for like a mile, made me much less sympathetic.

Okay, so that was Tuesday. I took a picture in case nothing better (or more frustrating) came along. But something did.

Friday as I was coming home I noticed that my exit was backed up again! What could it be this time?

Oh, look, there’s a bus blocking the left lane. Not even a full bus, either - one of those retard busses that only show up if you schedule them. ARGH! I ended up having to pass my exit, get off at the next one, and then come back on side streets. The backup was so far back I couldn’t even get in line.

Clogging up my exit has become quite the epidemic here. It’s a good thing I’m not armed.