We just couldn’t go through the holiday season without a Traffic Asshole, could we? I don’t think so.

Yesterday I went to training. Normally that’s nothing too special, but it’s nicer on the commute than most days because the training facility is only five minutes away from my house.

This time it took 45 minutes.

See, to get there, I have to cross a bridge. That’s not a problem, but it’s an older bridge with only one lane going in each direction. Traffic generally flows pretty well. When I got there yesterday, though… 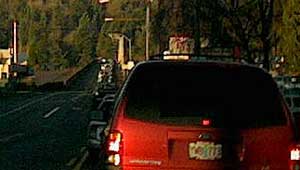 Traffic was blocked up like a toilet after someone who wipes too much. No plunger was going to clear this jam-up, though. I thought, “Maybe I could pass some folks…”

After sitting stationary for quite some time, things began to move… a little… 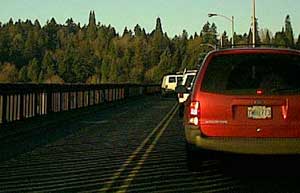 … but quickly stopped again. I couldn’t believe it! I left my house 45 minutes before class thinking I’d get there with plenty of time! Might as well enjoy the view… 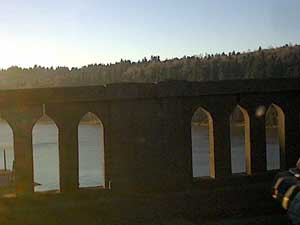 Ah, a nice Folgers-style morning. Good to the last drop. Or whatever.

I knew it was getting bad when I saw that I was being passed by pedestrians I passed half an hour earlier. 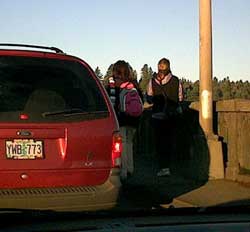 And when I finally got through, you know what it was? 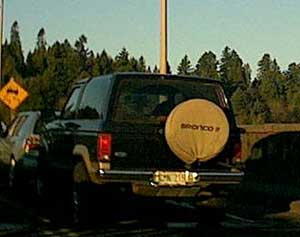 A Bronco. The earliest form of - say it with me - sport utility vehicle. And we all know how much I love SUVs. ARGH! Chalk one more accident up to the SUV drivers. Bastards.

This class is finishing up, so here’s the last post on it.

The teacher was a good guy but wasn’t too familiar with the subject matter, so he floundered at the beginning and to cover for it he rambled about things that had no bearing on reality. Having taught the section on code access security myself when he was ready to gloss over it, it makes me wonder what other tidbits of information I’m missing out on that he also glossed over due to lack of experience.

The courseware sucked donkey. There were altogether too many questions that had answers you could never have come up with on your own. The idea was there, but the person (or people) who QA’d the book should be fired. Or maybe they need to take the course, too, so they know why they did such a crappy job. Regardless, it made the class a little harder than it should have been, methinks, and that’s never good.

In the end, this whole thing is exactly what I thought it was: “Software Engineering the Microsoft Way.” It’s one more method to pull together and manage software development projects. This one focuses way too much on the planning phase, though, and while it looks good on paper, I can see several shortcomings in it, particularly when scaled down to apply to smaller teams and projects. This one’s best left for the larger stuff - huge product suites, operating systems, etc. I’m so glad this is a test I get to take.

Now we’re just talking about different ways to derive object models for your project. I’ve already had my four years’ worth of training in this one, but I’m listening to see what other people do; it’s always interesting to get an outside perspective.

After that, I’m outta here! Go home and… well, I haven’t planned that far yet. I guess I’ll see when I get there. On to the holidays!

We’ve been going hard and heavy today, so I probably won’t be posting again until I get home here… which means this is today’s report, even though it’s only midday.

It took me 45 minutes to go five miles on this morning’s commute, which is not something I was planning on so I was a little late for class. I think/hope I got some pictures of the traffic asshole that had the accident on the bridge I needed to cross, so if I did, I’ll post ‘em.

I got to teach some of the class yesterday (and a little today) on my meager knowledge of Microsoft .NET code access security. I’m by no means an expert, but I’ve spent many hours (and company dollars, I’m sure) on the phone with MS developer support fighting code access security issues, so I do have some decent knowledge of it (and what a huge pain in the ass it is).

I’m not looking forward to taking the test for this class. Gonna suck, big time.

Speaking of tests, Jenn got her results from when she took the national pharmacy technician certification test… she passed! That’s very cool and I’m totally proud of her. (She got a really good score!)

Okay, well technically speaking it’s not the end of the day today yet, but I’m going to post now because it’s lunchtime and I have time to do it.

The class is still pretty boring, but now we’re into the “how to design your database” section of things and, having already taken the SQL Server classes and having designed several databases myself, we’re into familiar territory. Not only that, but the teacher and the rest of the students seem to be more engaged, which brings the energy of the room up a few notches.

I went to Jenn’s VA Christmas Party last night and had an okay time. There were about 20 people from her pharmacy group that showed up, but she only knew a few of them. I spoke to the head of the VA pharmacy stuff for a while about Krispy Kreme donuts and apparently I had a longer conversation with him than Jenn has ever had with him. He seemed nice.

I talked to my dad last night and he says he wants to sign up to be on the next Survivor show, so I have to help him come up with ideas for his tryout video. I don’t know what the guy’s thinking; he’s got a bad back, he can’t see without his glasses, and he’s got terrible pollen allergies so bad he can’t mow the lawn. I’m not sure how far he thinks he’s going to get on the thing, but you know what? I hope he goes all the way (assuming he can get on the show). He’s been wanting to get on one of these reality shows for the longest time. More power to him.

At least I know he’ll be entertaining to watch on TV, right?

God damn this class is boring!

The most frustrating thing I’m running into is a distinct lack of quality assurance on the coursework for the class. We have labs (more like essay questions) at the end of each chapter that we go through, but they all end up like this:

Q: Company X is releasing a web site for online ordering. They want it secure and reliable. They want to make sure only registered users can purchase things. What are the user requirements?

Now, for those who haven’t sat through this, “user requirements” are essentially “requirements for what the end user will see.” The end user doesn’t necessarily see “security” or “reliability” - those are “operational requirements.” So the answer in the real world to this question is, “There are no user requirements specified.”

A: Web site users should be able to complete their orders in five minutes or less.

Where did that five minute requirement come from? You didn’t see it either? Fuckin’ A.

Anyway, that’s where I’m at. It’s boring, nothing else to say. Moving on.