Jenn and I didn’t do a whole lot this weekend, but we did go to a Superbowl party at a friend’s place.

Interesting way I met these friends, actually: I was in a geology class at PSU and was talking to a classmate, telling her that I was going to get a job at Lattice Semiconductor. She said her husband happened to work there (small world, right)? So I ended up going to school with her and working with her husband.

Anyway, they’re cool people and always have a great Superbowl party (lots of people and food) but I haven’t gone in the past couple of years, so it was good to go this year. Not only did I catch up with them (and see their kids finally) but I also got to see a lot of friends I used to work with who I have lost touch with. It was really great to see all of them, and hopefully I won’t be so long in seeing them again.

Metered On-Ramps Suck My Will To Live

This week I’m bringing you an extra-special Traffic Asshole.

I went to visit one of my potential mortgage brokers on Friday afternoon and, seeing as how it was 2:00p, figured I’d head home and work from there. You know - beat the traffic, so to speak.

Imagine my surprise to get into this: 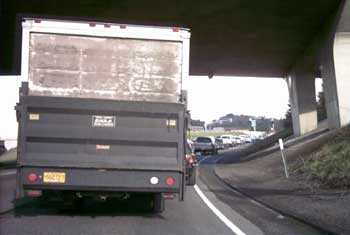 What the hell is going on here?

I continued into this quagmire, merging with some other traffic, equally backed up:

And when I finally got to the head of this thing, what was it? A wreck? A death?

No, something much more insidious still:

What a load of shit, man. Whoever figured out this metered on-ramp thing should be fucking shot. What else could cause such traffic devastation in the afternoon?

I sure as hell won’t miss that once I’ve moved closer to work.

I was looking forward to seeing something from MortgageDesignGroup today as I was promised on Friday, but it’s 5:00p, end of the business day, and I haven’t gotten anything.

On the other hand, I got a call from Ann this morning and she was exceptionally up front with me on some things that I hadn’t heard from anyone else.

The question was how flexible she could be on some of the closing costs and broker fees. She said that, frankly, she could make them all go entirely away. With that, though, is a sort of caveat. She likened it to a car dealership: You might get the dealer to give you a lower price and cut his overhead more than he’d like, but that rebate you might have qualified for… you suddenly don’t qualify for anymore. Basically, you might not pay the fees and closing costs up front, but you may end up paying it anyway in the loan’s percentage rate.

It sounds kind of crappy, but I won’t lie to you - I’d rather someone be honest with me than try to sell me into something of a lower value. I appreciated her honesty on that one.

And with that, I think I’ve picked my broker. Sure, I’ll wait to see if MDG sends me anything, but I have a very, very strong feeling I’ll be calling Ann back to ask what next steps will be. Jenn pointed out that, of all of the brokers I’ve talked to, the only one that doesn’t stress me out when I talk about her is Ann. I think that says something right there.

In other news, I’ve scheduled with the realtor to do a couple of walkthroughs this coming Saturday - houses he recommended that Jenn and I drove past this weekend. In the meantime, he’ll continue looking for stuff in our desired area and maybe we’ll have more to see when we meet up with him this weekend.

Jenn and I drove past the three house candidates on Saturday afternoon that the realtor sent over and further reduced the competition there down to two potentials. Those are the two we want to see inside so we can better gauge whether or not they’re any good. The outsides (and neighborhoods) on the two are good, though. So I guess we’ll see.

I find that the descriptions in listings are slightly misleading in some cases. For example, the house we ruled out was supposed to be on a cul-de-sac. Last I checked, that implied a street that has sort of a round end to it. My parents live on a cul-de-sac and it’s decent. What we found when we got there was the house situated at the squared-off end of a one-lane road. Yes, that means no room to turn around, no curbside parking for visitors, and a very cramped feel. Thank you, no. As nice as it might be inside, that’s not something I think I could put up with for years to come.

I’m kind of excited, in a sick sort of way, to see what MortgageDesignGroup.com can come back with estimate-wise. The more I think about the features and services they offer, the more I like them.

I met with Beth on Friday afternoon and was… hmmm… less than impressed. I’m not sure what it was. I guess I felt like she was selling me too hard on using her services. Like, an impersonal sale, rather than a genuine concern for what’s best for me. She was nice, though, and she did have lower closing costs than Ann did. I put in a call to Ann (and left a message) to see how negotiable some of those things are.

I was strongly leaning towards Ann for my mortgage broker until the people from MortgageDesignGroup.com called Friday evening. I first talked to Nicole, who, it seems, just gathers information so they can get a feel for what you’re looking to do. Then, a few minutes later, Ben (the underwriter) called.

MortgageDesignGroup.com is an interesting beast. They’re apparently both a bank and a mortgage broker. What they do is they fund you through their own bank, then they show your loan for 10 business days to 275 other banks. If they can get you a better rate elsewhere (and, according to Ben, they do about 20% of the time), then you get the better rate. Not bad, eh? Plus, being their own bank, the speed with which they can process things seems much better. Ben said they were on track to close things in 7 days in some cases. I think that’s pretty fast (though, admittedly, I don’t have anything to compare to).

After talking to Ben, I find that I’m pretty comfortable with him and with Ann. So I guess now it’s down to who can get me the best rates and the lowest fees. I feel good about Ann; she’s spent a lot of time with me and I sort of feel personally involved in that relationship. That said, Ben offered some pretty good benefits and, after all, we’re talking about money here - not being best friends. Friends is good; saving me money is better. If I can have both… well, that’s where I’ll be.

I’ll get the estimates - three separate ones - from Ben on Monday. Then we’ll see. In the meantime, I guess I’ll wait to hear back from Ann.

I went through all 54 properties that Gregory sent me to look at and, based on feature set and location, narrowed it down to three that I am interested in checking out. Jenn and I will do drive-bys to see what the neighborhoods look like and generally how far out they feel in relation to the MAX and my work. One property in particular is currently standing out to me, but it’s about $13K over my price limit, so if it turns out to be the one I’m going to have to do some haggling. I figured I’d have to do that anyway, but I’m wondering if people will come down that much. Jerry (who sits next to me at the hockey games) says they will, and for some reason I think he’s had a lot of experience with stuff like that, so I tend to believe him. I mean, the worst they can say is “no.”

That’s where it sits. I need to get Ben’s estimates so I can make a broker decision (and then send polite break-up emails to the brokers I don’t choose) and I need to see what these houses look like that Gregory’s sent over. Things are moving a lot faster than I had anticipated; it’s looking like we could be finished with this process in a couple of months, tops. I guess I anticipated it being like a three-month project getting all this stuff together and finding the right place and everything… if you get it all going in parallel, though, it moves totally fast.