On Friday Jenn and I went to Sayler’s Old Country Kitchen for Jenn’s grandma’s birthday dinner.

Now, keeping in mind that Jenn and I are trying to eat right and exercise and all that… Sayler’s is one of those places that breads and deep fries pretty much everything. If you look wrong at the menu you gain three pounds. It’s old school cooking, and it’s very popular with the older crowd. Heavy, heavy meals.

On their sign outside is a picture of a steak. Their menus are shaped like steaks. There’s a picture of a steak on damn close to everything in there. Why? They offer a 72oz. “steak challenge.” Eat it in an hour - with all the “trimmings” (baked potato, etc.) and it’s yours free. Fail the challenge and you pay $50 for it.

The steak sits in a glass case up front on ice. Jenn got a shot of it: 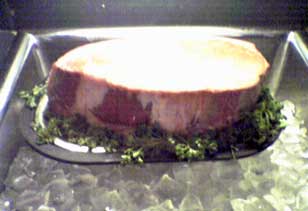 Apparently you have to call ahead if you want to take the challenge because the steak takes so long to cook.

Hitchhiker's Guide To The Galaxy

I really do. The problem is that adapting a book to film implies that certain things will get cut due to time constraints, the general inability to illustrate a concept visually, etc. When they do stick to the book (like the first two Harry Potter movies), I love it but the critics hate it. When they deviate from the book (like the third Harry Potter movie), I hate it but the critics love it.

I always hope they’ll stick to the book because the whole reason I want to see the film adaptation is to see the story I know and love brought to life on the screen. One of my favorite stories ever is The Hitchhiker’s Guide To The Galaxy and I was more than excited to see that it was going to get its time on the big screen (not counting the previous time, which, admittedly, I haven’t seen).

I think they were trying to get somewhere they shouldn’t have tried to go. They tried to get “creative” with it or something. They tried to somehow change or improve upon the story and it didn’t work.

I liked Martin Freeman as Arthur Dent. Mos Def as Ford Prefect was… well, he wasn’t what I pictured when I read the books, but I bought it. Zooey Deschanel was a great Trillian. Bill Nighy as Slartibartfast was perfect (and has my vote for most accurately represented character in the movie).

On the other hand, Sam Rockwell as Zaphod Beeblebrox left something to be desired. He felt too… flashy… and not enough “used car salesman.” The rendition of Marvin the Paranoid Android was not remotely how I had pictured Marvin in the books. And the spaceship Heart Of Gold had pretty much no bearing on anything I had imagined.

The Vogons, who are an interesting set of characters, were not major players in the books. I mean, they were there, but they didn’t show up every 10 seconds. In the movie, the Vogons filled in the “villain” role and were on screen almost more than the humans.

I won’t even get into the fact that the dolphins played like NO role in the first book but somehow made it to the opening credits of the movie.

I really hope they don’t try this again. I won’t even be picking this up on DVD, it was so bad. Sorry, Hollywood, you really lost me here. Now I’m going to have a hell of a time convincing Jenn to read the books.

I’m still torn on whether I should convert from pMachine to dasBlog as my blog software.

There’s some odd stuff with caching going on behind the scenes in dasBlog because it’s a filesystem-based package. pMachine doesn’t do that. Stuff like creating a second copy of all of the metadata attached to all of the comments on the entire site. If it’s stored with the comment, and it’s only used as a cache, why is it a physical file to begin with? Does it ever get rebuilt? Having a separate cache that is, in effect, a disparate data source from the actual data is asking for integrity problems.

The templates really bug me. The more I think about it, the more they bug me. I appreciate that the idea is to allow for folks that “just know HTML” to code up a template and run with it. As such, they use sort of a string-macro-substitution scheme where a huge set of undocumented “magic words” can be used to insert a bunch of stuff in an undocumented format into your page using undocumented CSS classes that you don’t get to choose. It’s an ASP.NET app - what happens if I want to add, say, a textbox to it? Or a treeview? Or any other ASP.NET server control that I could dream up? Right now, I’ve got to do some fancy tap-dancing-and-jazz-hands to put the server control into a user control and… uh, no. Seriously.

If the templates were made for a user who “just knows HTML” to use, how come the setup and upgrade procedures take an ASP.NET guru to figure out?

If everyone using dasBlog is using some external application (i.e., BlogJet) to post entries, it occurs to me that this means not one, but two things: First, that BlogJet is cool and convenient to use. Second, that there is a dire shortcoming in the built-in interface to create new entries that needs to be addressed. If it’s so inconvenient to use, what is it that makes it inconvenient? Address that.

While we’re on the topic of the built-in new entry interface, the usage of text editing components must be questioned. I know the dasBlog guys weren’t responsible for FreeTextBox or the way it munges up HTML. That’s fine. But here’s the deal: clean HTML isn’t important to some folks, but it really is to others, particularly when trying to apply complex CSS. Seriously. As far as I’m concerned anymore, it’s XHTML compliant or bust. (No, my current blog does not adhere to XHTML standards; that’s part of why I want to update. To get a nice, clean template that does.) Even if that means I enter a new entry in a plain old textbox manually (which is what I currently do anyway).

I might want the ability to upload images into one folder and other content, like downloadable software, into another folder. I, further, might even want a file browser so I can see (without having to FTP) what I’ve got up there and delete or rename files as I see fit. Hook me up, guys. It’s not rocket science.

If it doesn’t just work without tweaking, don’t put it in. If it’s not going to be documented so people can take advantage of it, don’t put it in. If you have to know how to create a nuclear accelerator out of duct tape and toothpicks in order to use it, don’t put it in. (This sort of goes back to the trouble with the administrative interface - complete configuration of the site can’t really be achieved through the admin interface right now, so you have to know where/how certain things work - undocumented - in order to get things configured just so.

Where was the common sense when writing some of this stuff. If you have a class called DayEntry and that class has a static method like OccursBefore(DayEntry entry, DateTime dt), then it occurs to me that, since you have to have a DayEntry instance anyway, the method should be an instance method, not a static one. Am I wrong? (There’s a lot of that kind of stuff in there.)

I know what’s going to happen here. I’m going to convert over to dasBlog and get pissed off that there are weird things in there. I’m going to rewrite the thing and have to run a fully custom implementation just so I can get things done. I guess I should just accept it now. Unless you dasBlog folks want to go on a major cleaning spree? Stop adding new features and make the existing product solid. Not just solid, but solid.

I’ve heard that the CR_Documentor plugin is a little sluggish on some folks’ machines so I decided to run a profiler on it and see what’s slowing me down.

The profilers out there for .NET suck. A lot.

The problem with the majority of them is that they only profile executables. You can’t just profile a satellite assembly that you’ve written that gets used by an executable, and you can’t just attach to a process that’s already running and using your assembly.

Well, as an add-in, my assembly’s technically running under Visual Studio itself - devenv.exe. So there’s your host app…

I tried DevPartner Profiler Community Edition. It blue-screened my box twice before I gave up. I never successfully even got VS started up to be profiled.

I tried nprof, the Red-Gate ANTS profiler, and the CLR Profiler. No luck.

DevExpress tech support recommended AQtime, since that’s what they use. It seemed the best of the bunch, being able to attach to existing running processes and select specific assemblies to profile, but it wouldn’t allow me to attach to an existing running instance of Visual Studio, nor was it able to start one up for me (I got a bunch of Access Violations and VS would puke). So the best of the bunch (that I tried out) never worked.

Long and short of it is, I never got the thing profiled. I’m thinking I may have to add some sort of trace-style instrumentation and/or performance counters to get this done. Hmmm.

I’ve also made quite a bit of progress in my pMachine-to-dasBlog conversion program and may try to transfer over in the reasonably near future. Of course, after having experienced what I have thus far with dasBlog, I can see that there’s some work I need to do on that in order to accommdate the stuff I’d like to do in a reasonable fashion (for example, the templates being of the “macro substitution” fashion need to be fixed to actually work like master pages so I can design them using real controls and not just string replacement… not to mention there are far too many moving parts behind the scenes there for the amount of stuff it’s actually doing…). We’ll see.

I’m struggling right now with the fact that JavaScript/ECMAScript doesn’t allow for Unicode character classes in regular expressions. For example, if I want to set up a client-side JavaScript validation expression on a numeric field, I’d want to do something like ^\d+$ as my regular expression, right? Match one or more digits?

The problem is that in JavaScript, \d expands out to [0-9], which technically isn’t all of the digits, if you think about all of the other alphabets out there that exist and don’t use 0 through 9 to indicate numbers.

Using \d as our example, a C# snippet that expands the digits looks like this:

You can try this out at http://www.regular-expressions.info/javascriptexample.html. Seems to work pretty well.

I’m using numbers as my example here, though the same thoughts could be applied to letters or any other character classes. Like in JavaScript, \w maps to [a-zA-Z_0-9], which is obviously not all the possible letters out there.

You could even take this a further step and pre-calculate all of the Unicode character blocks at application start time and cache the common character class expansions for use in regex translation on the server side.

Updated 9/9/2005 for boundary condition logic error and again on 9/11/2005 to fix accidental omission of the last block (thanks cougio); modified the method to be a standalone static for easier cut and paste into applications; added comments for readability.