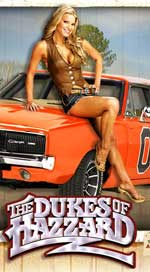 Another busy weekend this past weekend. I always think my weekends are going to somehow be restful, but it usually turns out the “work hard, play hard” thing rears its ugly head and I end up running all over town having fun.

Yeah, that sounds like a real complaint there, doesn’t it?

Friday night we saw Charlie and the Chocolate Factory with my parents.

Saturday Stu and Tif came over so Tif and Jenn could wash and wax their cars the way Stu and I did a couple weeks back.

Stu and I took about an hour to put some edging up along the side of the house (we have some barkdust that always seems to overflow onto the sidewalk, so the edging should hold it all back). After that, the ladies washed and waxed while we played video games. It had been a while since I had played really anything but Dance Dance Revolution, so playing some cool game demos to see what’s coming out and throwing down for a while in Burnout 3 was a hell of a lot of fun.

When it started heating up (too hot for the ladies to wax anymore), we took some time and went to see The Dukes of Hazzard, which was great fun.

We got back and the ladies went out to finish their cars while Stu and I gamed and watched some TV. Long about 11:30p they finished and we all called it a night. Stu and I were fading fast, and I’m sure Jenn and Tif had had enough for the evening.

Sunday was chore day. Jenn and I did the vacuuming, laundry, dusting, shopping, and everything else that doesn’t get done all week.

My parents got cable Internet access so they needed me to come over and set up their wireless router for them. On the way over, we had a little issue where this guy cut across three lanes of traffic and jammed his stupid minivan nose slightly in front of me in the left hand turn lane and tried to wave it off, like, “Sorry! I realize I just cut across three lanes of traffic to try to get right in front of you, but it’s okay because I’m waving!”

It’s not okay; this isn’t Hawaii, there’s no “Da Kine,” motherfucker. You screwed up - accept responsibility for that and turn around legally, the way everyone else does, and come back from the other direction. No cutting across three lanes of traffic because you were reading to the kids in the back seat and weren’t paying attention and missed your turn. Ass. I laid on the horn and gave the guy the finger. No way he was getting in on my watch. Fuck that.

Okay, so, anyway, we got to my parents’ house and I set up Dad’s wireless router. That didn’t take too long, and it was nice to sit and talk with them for a bit. After that, home, more chores, and, finally, bed.

And, like I said, I’m dragging this morning. I may have to go get a Jamba Juice or something.

Charlie and the Chocolate Factory

On Friday I went to see the latest version of Roald Dahl’s Charlie and the Chocolate Factory as seen on the big screen. Huge screen, in fact, as I saw it in an IMAX theater.

I didn’t go in expecting much. The original movie holds a special place in my heart with its songs and Gene Wilder’s couldn’t-care-less Willy Wonka.

I came out very pleasantly surprised.

Tim Burton took the film in a more true-to-the-book direction (at least, so I’ve heard; it’s been years since I read the book and don’t remember too well), and did a great job at it. Plus, with the usual Tim Burton surreal thing going on, it all came together to be pretty darn entertaining.

Johnny Depp did a great job as a pretty freaky Wonka with some pretty obvious family issues. I was worried about how he’d be able to pull off the character, but he did a fantastic job and made it his own, without a hint of the Gene Wilder influence. (That’s actually what I was more afraid of - that it’d be a bad imitation of an excellent Gene Wilder performance.)

The story was slightly updated, too, to account for more recent times. Mike Teavee, for example, was a video game addict rather than just a TV addict. Of course, once Wonka’s factory was entered, all that went out the window anyway.

Which actually brings us to Wonka’s factory - excellent job on the rendition of that. In some cases, particularly the first room they enter where the chocolate waterfall is, it was just like the original movie, but in others, like the invention room, it was entirely new. A pretty good vision for what such a place should look like. And the Great Glass Elevator? Way better than the original movie.

I think the IMAX theater added to the surreal nature of the film. The camera angles and sets, which were already pretty crazy, were just made more crazy by the larger-than-life size of the screen combined with the curvature of the IMAX dome. (That’s the only downside to seeing a regular movie in IMAX - the screen curves, which takes some getting used to and sort of makes you a little motion sick at times. Plus it’s so big it’s hard to figure out what to focus on at any given time. Movies that are originally filmed in IMAX don’t have this problem because the filming accounts for the curvature.)

All in all, I liked it, and recommend seeing it. Maybe at matinee prices, or rental - it wasn’t $10-a-seat-in-a-regular-theater worthy, but if you get a chance to check it out on IMAX, do it. Pretty cool stuff.

County Fair and the Beach

This weekend was a hell of a lot of fun, but also pretty exhausting. It’s Tuesday and I’m still beat.

Friday evening, Jenn and I went down to The Bite of Salem to help out on their fireworks show. Apparently one of the previous shows we had done wouldn’t qualify for our pyrotechnician license application because the show was all multi-shot boxes rather than individual mortars, so we had to get another show in that had mortars.

Traffic was terrible, and we got there later than we hoped, but it was a good show and a lot of fun. Met a bunch of cool new people on that crew, some of whom I recognized from the pyro training course we took last year.

Saturday we went with Tif and Stu to the Washington County Fair to check things out. Admission this year was free so they could boost attendance, and it seemed to have worked because it was pretty packed. We walked around, saw some animals, ate some fair food (the whole reason I go to the fair involves some complex logic surrounding funnel cake), and watched a very cool demonstration by the Washington County Sheriff’s Office on their K-9 patrol unit. That was actually really slick - showing how highly trained the dogs are and such.

The fair took a lot out of me. There wasn’t a lot of shade, and there was a lot of walking around, so by the time we got home that night I was absolutely beat. We ate and went to bed by about 11:00p in anticipation of leaving for the beach around 10:00a the next morning from our place.

I think I woke up around 7:00a the next morning and promptly rolled over and went back to sleep. Maybe 9:15a I woke up again and realized that Stu and Tif were supposed to be there in 45 minutes so we could go. We rolled out of bed and started getting things together when I got a message that they, too, were running late. Fine.

Made it to Seaside by lunchtime. Walked around to the various shops (nothing new there) and visited more than our fair share of candy stores. Of course, visited the Seaside Candyman and bought some stuff there (how can you not?).

After we did all that (and ate) we rented a four-person surrey to pedal around the town from Wheel Fun Rentals.

Pedaling a surrey around is not as easy as you might think.

See, on any modern bike, there’s sort of a transmission, where you can start out on a low gear and spead up as needed. Not these bad boys - direct drive. That makes starting out a little hard since there’s a lot of weight you have to get moving. Those smiles you see on the surrey riders? Grimaces of pain.

Now, that said, we had a frickin’ blast on the thing. Stu tried to pick up a passing volleyball player (which got him punched by the other three folks on the cart simultaneously) and we made a fantastic last-minute tour through the Shilo Inn parking lot that was more like surrey rally racing than anything else.

We had the rental for an hour and I think we returned it after 45 minutes. We were all worn out and it was time to move on.

We stopped on the way home at the nearby factory outlet mall, where I purchased nothing, and then took forever to get home due to some pretty terrible traffic and an accident blocking the only route. Another late night, then back to work Monday.

Like I said, I’m exhausted today. Here’s hoping I can make up some of that sleep soon.

…and the only prescription is more cowbell.

(The idea of a digital cowbell is pretty ridiculous, but what a gimmick to sell t-shirts…)