The Visual Studio Hacks site just published an article in their new “Ask The Pros” series called “Ask The Pros: Visual Studio .NET Addins.” In that article, Scott Hanselman gave some props to CR_Documentor as his favorite DXCore plugin. Thanks, Scott!

Seems CR_Documentor is making the rounds today. Got a mention on the Powertoys Weblog from Josh Ledgard, which totally rocks. 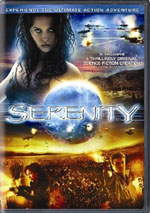 Serenity, the best sci-fi movie I’ve seen in a looooong time, is now available for pre-order at Amazon. December 20th it’s out. That’s pretty quick, but I’m not going to analyze it too much. I’m stoked to see it again, and in the comfort of my own home. Buy two copies - it’s that good.

I decided to keep a tally this year of how many trick-or-treaters showed up to the house this year. Between 6:00p (when I got home and started serving) and 8:00p (when the frequency of arrivals slowed enough to warrant shutting down) we had 155 kids.

Of course, probably 15 of those were probably old enough to be tried as adults for any crime by a jury of their peers (hint: high school means no more trick-or-treating), so let’s use quotes around “kids.”

One kid was pretty lippy, too. Probably nine years old or so, he shows up and I answer the door in my Wonka costume. I hand out the candy and just before leaving, he strikes up conversation:

Kid: Who are you supposed to be? Me: Willy Wonka. Kid: I hate that guy. He’s queer. [Kid exits stage left.]

Give me back that candy, you prepubescent asshole.

Aside from that, all went well. I realize now that the tally would have been much more interesting had I charted the number of kids who showed up both by general age group and time so I could see the trends from year to year, but maybe that’s just overengineering the thing.

We didn’t run out of candy this year, which was good (we did last year). We did go through about six pounds, though. Jenn’s going to take the remains to work so we don’t pig on it at home. 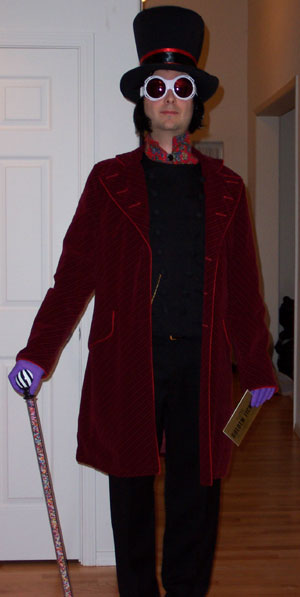 Folks have wanted to see what my Wonka costume turned out like, so here’s a photo. It turned out pretty well, I think, though the wig and gloves made me super hot (like, the heat was darn close to stifling) and it was sort of a pain to get into and out of - not so great at a party.

Stu went as Bo Peep, and that turned out pretty well. I think the hairy-legs-under-tights is what makes it. Shaved chest, hairy legs. Right on, brotha.

Jenn and Tif looked great in their costumes as well (too bad they don’t wear those more often… :) ).

Saturday night was Jason and Tracy’s yearly party, which is the shindig to end all shindigs and is looked forward to every year. (It just happened two days ago, and I’m already stoked for next year.) We played our new favorite game - shot checkers (get jumped, take a shot) - and took all Sunday to recover. Great party, though, and I even won best costume.

Today at work is sort of a rinse since everyone wants to come by and see the costume so interruptions are frequent. I got $25 at Barnes & Noble for “coolest costume” at our company contest, which is sweet. Stu got “most original” and got a gift card to a restaurant. Can’t beat that!

We shall see what next year has in store. I’d like to get some sort of group costume going, but I’m not sure what we’d all be that folks would recognize.