Jenn and I saw The Devil Wears Prada yesterday and I liked the soundtrack so I picked up a copy. I listen to my iPod and not CDs, so I tried to rip it this morning So I could have it for my commute.

I have two CDROM drives at home. One didn’t recognize the CD at all, the other recognized it as audio but wouldn’t play it (all tracks zero length).

Reboot, try again (just in case it was a fluke), still no luck.

Did some research in how to figure out what kind of copy protection I was up against and found that most copy protection detectors need an ASPI layer to be installed in order to work, something that doesn’t come with Windows XP by default.

I installed the one at ForceASPI 1.8 (tried the one at Adaptec and it didn’t work… at least it wasn’t recognized by ClonyXXL) and rebooted. Put the CD in the drive (the drive that didn’t even recognize it to begin with) to inspect it…

…And it totally knew how to play it. No copy protection circumvention needed. Just installing the ASPI layer fixed it.

I’ve never heard of an ASPI layer fixing a drive against copy protection, so maybe the installation just corrected something that was wrong - replaced a corrupt driver or something. I’m not going to question it - the ends justified the means for me. Might be a simple first step for people having CD ripping issues, though. YMMV.

Ever wonder how much propane you have left for your barbecue? We have this pressure gauge thing that mostly works to let us know, but these new transparent propane cylinders have been a long time coming. I have to have one.

It’s going to be a long day today. I am every shade of aching, from my head down to the small of my back. I can type well enough, which is good, but I can’t write because I can’t frickin’ grip anything. Just goes to show how much of a desk jockey I am, that the fireworks show on the fourth took it out of me that badly. In my defense, it is a lot of hard work. I normally don’t go out digging trenches and whatnot.

I’m also vastly undercaffeinated, so it’s time to fire up the ol’ Mountain Dew train and get on board.

Greg was awesome enough to get Jenn and I some Western Display Fireworks crew shirts so we’ll look all official next time we’re working (Western is who we do the shows for).

In other news, I have been playing Hexic on Xbox 360 and finally got a black pearl cluster, giving me 20 pride-filled Gamerpoints. It’s been a long time in the works getting there, so I’m pretty stoked. You should have seen the [pain-ridden] victory dance last night.

I’ve taken a loooong weekend, from June 30 - July 5, for a couple of reasons. The first is my sister’s wedding. The second is fireworks… but that’ll be a different entry. 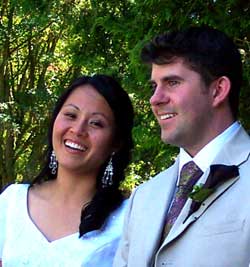 My sister Tori was married to a fellow named Brandon on Saturday, July 1. The ceremony was held in the Mormon temple in Bellevue, WA, so I didn’t actually get to see it. Instead, Jenn and I made the three-and-a-half-hour-each-way trip up and back on Saturday to be at the reception, also held in Bellevue, on Saturday afternoon.

Friday (the 30th) was Jenn and I getting things done so we were ready for the trip Saturday.

Saturday around 11:00a we left so we could be there at 3:00p for pictures (and maybe stop on the way for something to eat). We got there in time to have some lunch at Burgermaster (Jenn’s first time!) and did, in fact, make it for the pictures.

At the reception we got to meet a lot of Brandon’s family and we saw a few folks from ours that we don’t normally get to see, which was good. It was hot, so we mostly tried to stay in the shade, but there was a nice garden setup with some tables and such in shady areas, so Jenn and I relaxed and enjoyed the festivities.

At about 6:30p, the reception was over, Tori and Brandon left, and Jenn and I were once again on the road for a long drive home. We got home a little after 10:00p.

We haven’t done a Traffic Asshole of the Week for a while, so let’s give you two in one shot.

The setup: Once a year in my neighborhood they advertise in the paper for a development-wide garage sale. Everyone with something to sell can pop their garage doors open and hawk their wares. This causes a parking nightmare as everyone in the neighboring states floods into my development to buy up junk.

The photo: Taken through my front window blinds. Let’s study this one: 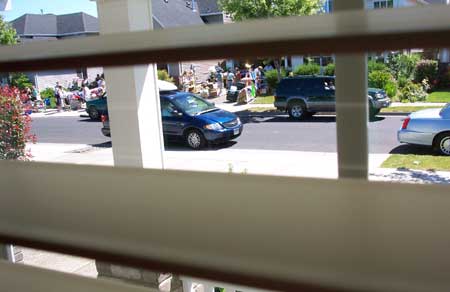 There are two (2) assholes in this one.

The first one is the blue minivan clearly parked right in front of my driveway. That’s parked - not “we let someone off and kept the engine running,” but fully “we shut off the engine and don’t plan on moving while people with us are walking up and down the block.” (These folks watched me stare them down through my front window and ignored me… until they saw me pull the camera out, then decided maybe parking illegally in front of my driveway wasn’t the greatest idea and pulled out.)

Sometimes, you have to wish you drove a tow truck.