Why Motorcyclists Get Killed

We haven’t done a Traffic Asshole in a while, so I figured it’d be a good time.

Jenn and I took a trip up to the Empress Palace last week to do some wedding preparations. Traffic was pretty heavy and Jenn was driving, so I hung out with the camera on the lookout for traffic assholes (as is my wont).

Check this guy out: 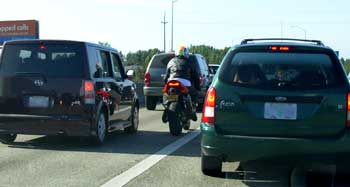 How many thousands of motorcycle deaths do you hear about each year? Normally I feel bad, thinking that cars should pay more mind to the other lesser-wheeled vehicle companions.

If someone had knocked this guy down, I wouldn’t have stopped. In fact, I’d have laughed. It sounds hard, but you get what you deserve. Obey the law, dumbass, and maybe you’ll live to ride your motorcycle tomorrow.

Lifehacker has a nice article on setting up a personal home Subversion server. You can store your repository locally or on a server - the article addresses both.

I use CVS in a local repository to store my project code, but at work we use Subversion and I’m enjoying the flexibility. I may have to switch over to a local Subversion.

Programming Is Hard is a site for sharing common code snippets and links. Sort of like Flickr for code.

Is this really a time saver, or is it a bad idea? I mean, sure, grabbing some common functionality from somewhere might get you going a little quicker, but remember Scott’s Rule of Programming #0x3eA

On the other hand, folks have experimented with putting incorrect data into Wikipedia and found the incorrect data doesn’t stay there very long before someone corrects it. Will that same level of policing go on with these code snippets?

I think maybe there should be some nature of moderation - like you submit a snippet and then it has to be reviewed before going on the site. Or maybe that’s asking too much, and a free-for-all really is the way to go, with the implicit “buyer beware” disclaimer.

Richard Feynman was, by any measure, The Man. Full stop. This video of several interviews with him just proves it. No one can entertain and educate quite the way he did. If you haven’t read the book, get it.

How many times have you seen this:

A new software project starts, and a lot of design is done up front so the actual code and organization of the project is fairly clean. As time goes on and requirements change, the project mostly stays clean. Then someone will be working all on their own and think, “Hey, I’ve got this job I’m trying to do that doesn’t really fit the way the current design and architecture is, so I’ll just jam this little helper/object/whatever right over… here… yeah. There we go.”

A little time goes by and someone else gets a similar requirement, can’t find the little helper/object/whatever that the other developer put in (because it isn’t where you’d expect it to be), so re-invents it and jams it somewhere else.

After not too long, you step back from the project and it’s not so clean anymore and no one can figure out why.

Jeff Atwood wrote about this a little while ago. The concept of “working clean” in code. I think there are three problems to overcome when trying to maintain a clean project.

First, education. I’m finding that not too many people in software development actually have a formal computer science education. Not that that’s a requirement to be a developer by any means, but even if you’re not writing compilers for a living, understanding why you might not just put every single method or property you might ever need in the base class of your object model is handy. That sort of education - or maybe it’s intuition? - is sorely lacking in a lot of developers.

Second, communication. People don’t communicate what they’re doing, or they assume everyone knows what they’re doing already. A task called “Create Data Provider” doesn’t necessarily imply to the team that you’re going to be modifying the UI classes so folks aren’t going to expect things to change there. If people were to do a little bit of design up front and say “here’s all the stuff that has to change,” it’d be easier for the rest of the team to add input and correct design decisions prior to a lot of work being done. (Admission: this is probably more of an issue on a smaller team with a less formal process.)

Third, work ethic. I find that many times people just don’t care. “Oh, yeah, I guess I did sort of hack that in there without any thought to how it fits in the big picture. We’ll fix it later.” But you know you’ll never get to it later - there’s no time! They know at the time they’re doing it that it’s the wrong choice, but they just don’t seem to care. I’m not really sure how to address that.

We need to quit designing by jamming, folks. Stop jamming code in there. Take a second, breathe a little, and step back - look at what you’re actually doing and do it the right way.

(I know I’m going to get a lot of folks with the “in the real world…” sort of thoughts. If your company/process allows you to provide your own task estimates, you need to factor the design into your task. Don’t say it’s going to take you three hours when it’s a six hour project. On the other hand, if you don’t get to provide your own estimates… well, maybe you’ve got other issues to deal with.)