There have been all sorts of power issues since a windstorm that hit last Thursday, but on Saturday a transformer caught on fire and blacked out the entire city where I live. We had gone out to dinner Saturday night and all was well; coming home, it was like driving into an abyss. No street lights, no traffic signals, no lights in any home. The airport by us also had no power, which was pretty crazy because it always has lights going.

We drove around downtown Hillsboro to see how far the blackout went, but we never really found the end. It was sort of like a crazy science fiction movie where a giant EMP goes off. Power was restored for us at 5:53 the next morning.

I picked up some new CDs on Saturday because I was needing a little bit of new tune-age. I can’t see buying from iTunes anymore because I can’t un-DRM it (haven’t really mucked with myFairTunes, but Stu says he can’t get it to work) and I’m really not satisfied with 128kbps compression.

Nelly Furtado - Loose: The song “Promiscuous” just would not leave my brain so I had to get this. The rest of the album is pretty good, too, though I feel like the first half is stronger than the second half. The first half feels sort of hip-hoppish, while the second half feels like it takes of on this latin tangent that I’m just not as into. Still, it’s pretty good, and I think it’ll grow on me.

Real Life - Send Me An Angel (The Best of Real Life) - These guys were one-hit-wonders with the song “Send Me An Angel” and I’ve only ever had a worn-out tape with it, so it was time to step up to digital. The rest of the songs on here are pretty lame, but the two versions of “Send Me An Angel” make it worth it (for me).

Most of the rest of the weekend was spent in last-minute scrambling about in preparation for Christmas this coming weekend. The 24 marathon is at my house on Saturday, so the weekend is totally out of commission for anything last-minute. I got a little bit of gaming in on the ol’ Xbox 360, but not much. I think I’ll try to play a little more tonight because I miss my digital buddy. 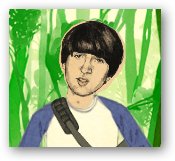 I’m really not sure what this is - if it’s some sort of “viral marketing campaign” that I’m not smart enough to get, or just some experimental thing - but it’s tied to Microsoft Windows Vista somehow and it’s intriguing. There are these episodes telling the story of this guy, Demetri, and his odd psychological issues. I haven’t watched all of the episodes yet, but I will. How can I not?

Granted, I’m slow to find this stuff, but EGM has a couple of hilarious articles where they have kids from today play classic games like Space Invaders and Tetris. The reaction of the kids is too funny and makes you feel kind of old.

Is HyperOS The Answer To Imaging?

I wrote a couple of days ago about having to re-image my work machine. Got an interesting email from a fellow named David Groves about an application that may be the answer to my issues: HyperOS. Looks like it’s sort of a cross between ghosting and multi-OS booting where you can have several copies/versions of Windows running on one machine and easily back up/switch between them.

I’ve considered running my development environment in a virtual machine but I’ve never wanted to incur that overhead. Even with all the optimizations in the world, with the hardware I’m using the overhead of a VM makes it noticeably slower than running natively and I need more speed, not less. This HyperOS application looks like it gives you the best of all worlds. Maybe I should try it out.

Perhaps once every six to twelve months I end up flattening my work computer and getting the IT folks to drop a fresh, clean image on it. I install, uninstall, re-install, and generally mess around with the thing, so after a time it really starts running slow and unreliably.

This time, my problem ended up being that I installed Notepad++ (which I’m not linking to so no one falls into the same hole I did). Turns out if you use the menus in Notepad++ to associated document types with it, it deletes the old document type and creates one central type in the registry that it associates with the document extension. So if you associate XML, LOG, CONFIG, and TXT with Notepad++, they all become “Notepad ++ Documents” and if you change one to do something, all of them change.

This is particularly troublesome in the case of “BAT” - batch scripts. I associated “BAT” with Notepad++ and it removed the ability to execute batch scripts because “BAT” became a “Notepad++ Document.” I futzed around with the registry and trying to recover from backup, but it was no use. Time to re-image.

I got the machine re-imaged on Friday at around 2:00p. I was up until 1:45a Saturday re-installing everything that wasn’t included in the image. After final tally, there were over 45 applications, utilities, and other tools I installed. And that didn’t count doing things like checking out the source to all the stuff I have to build.