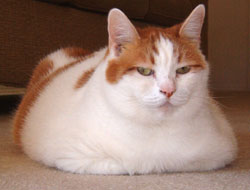 Christmas this year was reasonably good, all things considered.

We opened the season up with the 24: Season 5 marathon at our house on the 23rd. From 8:00a to 1:00a the next morning, Jack Bauer fought terrorism in my living room while Stu, Meaghan, Jenn, my dad, and I sat entranced by the action. Watching it marathon-style really is the only way to go.

Christmas Eve being the next day, we slept in a bit (watching TV that long is actually pretty wearing… sort of counter-intuitive, I know) and finished the last of the package wrapping. That afternoon we headed over to Jenn’s parents’ house to do some gift exchange and chat for a while with them. Jenn brought her Nintendo DS because her mom and niece both got them for Christmas and it was the first time we were able to play with some of the networking abilities. It’s actually a pretty slick deal and we had a lot of fun with it.

After that, we went over to Jenn’s mom’s cousin’s house and visited with some of her extended family. I’d been there once before, several years ago, but while I recognized faces, I’m horrible with names and had to be re-introduced to folks. I’m introduced as “my husband, Travis” now, which is still weird for me to hear.

Christmas Day I had expected to be at my parents’ house early, but they had things to do, so Jenn and I exchanged gifts to each other in the morning and it ended up being a little after noon before we got to my parents’ house. We talked for a bit and I showed my parents some of the gifts Jenn and I had gotten each other, then my grandparents showed up and we ate dinner… at 2:00p… which I guess is what elderly folks expect, but is still something I don’t understand.

We exchanged gifts with folks, Jenn and I taking advantage of the wedding this year and giving a lot of wedding photos. I got a few very cool things that I’m enjoying on my vacation, including The Unit: Season 1, Gears of War (and the strategy guide), The Beatles’ Love album, and more energy drinks than I’ve ever seen in one place at one time.

All in all, a good Christmas, but nothing screamingly outstanding or exceptionally notable. Jenn and I have been talking about the fact that Christmas sort of loses its magic more and more the older you get. It becomes less about the wonder of the season and more about trying to arrange schedules, make sure everyone has a gift, get everyone together come-hell-or-high-water… it’s not at all like it was when we were kids, and it’s not like you see in the movies. It used to be, and neither of us are really sure where things went wrong. Maybe it’s the age difference, maybe it’s the turmoil of the year catching up to us, maybe it’s something else, but it’s not the way it used to be - the way it should be. We’re going to have to look at how to change that for next year.

Harry Potter and the Deathly Hallows

My mom just called me (she works for the Fred Meyer book buyer) and let me know that the new Harry Potter book is Harry Potter and the Deathly Hallows. No release date yet, but it’s kind of cool to get information on the inside track.

Gadgets That Help You Clean House

I’m always on the lookout for tools, tips, and tricks to make my life easier. I read Life Hacker. I follow Hanselman’s Ultimate Tools List (I think I’m on the list). The thing is, I hate cleaning but I haven’t seen anyone provide a list of ways to help me so I don’t have to clean my house. I’ve found a few things I use and like, so here’s my list of things I use to make it easier to keep a clean place.

Kaboom! Never Scrub - I found this one by accident at the local supermarket and figured I’d give it a run. The idea is that you put this device in-line with the pipe that fills your toilet bowl and the water runs through a chlorine filter to kill any bacteria and add some bleach to the water to stop anything from growing. This thing is amazing. I have one of these in every toilet in the house. You still have to clean the outside of the toilet, but nothing grows under the rim or in the bowl. Note that if the toilet doesn’t get used (never gets flushed, or doesn’t get flushed often), then water won’t be running through the filter and stuff will eventually start to grow. We have one bathroom that rarely gets used; we flush the toilet once or twice a week to make sure it stays clean.

Caution: if you have pets that like to drink out of the toilet, this isn’t for you (or you’ll have to make sure you keep the lid closed).

Placement on this is key - if you put it somewhere so the spray head can’t shoot solution to one area of the shower, it won’t get clean; if you place it too low, it won’t reach everywhere because the spray head isn’t a fire hose. It generally is supposed to hang from your shower head, but we have one of those removable massage heads so I put a plastic hook in the shower.

I’ve found that, while it keeps the orange soap scum out, you do occasionally have to give the shower a good scrub to get rid of some of the more built-up scum. We have glass doors on the shower and still have to pay a little attention to them. Not as effective as the Kaboom! Never Scrub, but pretty darn good.

What gadgetry and doo-dads do you use to keep your house clean?

UPDATE: It appears that the “youparklikeanasshole” site I visitedis actually an infringment on an existing product that has been sold for a while. I’ve removed the link to the site out of respect to the original idea distributors, however my two cents:

First, when I was in grade school a friend of mine gave me a “leave-behind” that looked veeeery similar to this. It didn’t actually say “you park like an asshole” on it, but it did refer to the driver as an asshole and had a checklist of infringements on it. That was over 20 years ago, and somehow I’m in doubt that it was produced by Cold Cocked Cards. It looked like one of those jokes you see posted on the wall of your local auto body shop, photocopied to death. If I recall correctly, it had Mickey Mouse on it with his middle finger out.

Second, the addition that the youparklikeanasshole site provided that made it cool was the ability to upload and categorize photos of the asshole parkers. Connecting the real-world leave-behind to the online world is a great idea and is what pushed it over the top from an “interesting idea” to a “cool site.” It might be in Cold Cocked Cards best interest to either partner with youparklikeanasshole or settle or something because the photo upload thing is an idea that shouldn’t be missed.

Anyway, it sucks when someone steals your idea, so I hope things pan out for everyone involved.

My friend John just sent me to my new favorite site: youparklikeanasshole.com. Maybe I should submit some of my Traffic Assholes to this one.