Elapsed time from start to installing add-ins: 6 HOURS.  Absolutely ridiculous.  From what I hear, I’m not the only one eating it on this one.  I don’t remember the betas kicking my ass like this.  What happened?

With the release of VS 2008 and yet-another-Visual-Studio-command-prompt, I figured I’d do a round-up of all of the “Command Prompt Here” power toys that I’ve gathered to assist me in keeping this all working.

Oh, and all of these together looks pretty crazy.  But it’s useful. 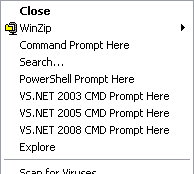 Yours for the taking!

UPDATE 3/12/09: If you need more in the way of easy run-as-admin elevation stuff, like the VS 2008 Admin command prompt tool, you’ll want to check out the Elevation Power Toys on TechNet. Everything from “elevate this script” to “PowerShell Admin prompt here” is waiting for you.

It occurred to me the other day that there’s information out there about the technical aspects of writing XML doc comments in .NET code (i.e., the markup tags) but there’s nothing out there about what you should put in that markup.  While not every developer is also a technical writer or novelist, sometimes all the users of your code have to go on is the documentation you generate, so it’s important to write it well.

And, no, you can’t just defer your users to Reflector.  You’d actually be amazed at how many people don’t even know what Reflector is.

TL;DR - THE GOLDEN RULES OF DOCUMENTATION There’s a lot here. If you don’t take anything else away, please at least take these two things:

Given those two rules, here are some tips on writing better XML doc comments:

There are a few tools out there that can help you improve your XML doc comment writing experience.  My two favorites are:

Write the docs you’d like to see. Start with that, and the rest should fall into place for you. 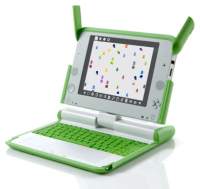 The One Laptop Per Child foundation has their “Give One, Get One” program going on where you buy two of these little XO laptops and one comes to your house, one gets donated to a child in a developing country.  It’s $400, and $200 of that is tax-deductible (the cost of the laptop that gets sent to the developing country).  The rest goes toward the laptop that hits your hot little hands.  (Ostensibly to give to a child in your life, but for me it’s more likely a toy to hack.)

A charity to help teach kids computing skills? Oh, hellz yeah.  I bought mine; have you got yours?

Sunday was my first trip to an Ikea store ever.

I never really understood what the big deal with Ikea was.  Everyone I talked to who’d been there would start salivating when I talked about Ikea, barely able to contain their feelings about how awesome it is.  My uncle (and many, many others) swears by the meatballs.  I’ve got friends who would only ever shop at Ikea (and no other stores, ever) if they had that option.  I just never got it.

Sunday, Jenn and I packed up and, with our friends Angela and Keaka, headed to the Portland Ikea store.  I went with a skeptical mindset, fully expecting to be underwhelmed.

Ikea is sort of like… well, if General Electric or Mitsubishi decided to open a store that just sold everything they made, that’s what Ikea is.  They sell everything.  Batteries.  Furniture.  Art.  Food.  Toys.  Seriously, it’s just overwhelming.  Angela told us she usually allocates about three hours to an Ikea trip and I can see why - you can’t actually make it through the place in much under two.  We took two and a half hours.

I didn’t expect to buy anything.  I’ve always seen the catalog and not been really much interested in anything.  I ended up purchasing a chair, an ottoman, a rug, and some artwork for our front room.  All put together, it’s got a really nice lounge sort of feel to it, and it’s nice to get some furniture in that room.  We’ve been in the house for a few years now and have been looking for the right stuff.  I think a key factor here was price - we got all that for less than $750.  Not bad.

Of course, less than 24 hours went by before Jenn’s cat peed on the ottoman and the rug.  Maybe the low cost paid off.  (As far as I can tell, the stains came out, but still.  Come on.)

We also had the obligatory meatball lunch in the cafe there and I liked it.  I’m not all crazy over the meatballs, but they’re pretty decent.  I also discovered that I like lingonberry and several of the desserts there.

So I’m an Ikea convert.  I finally get it.  I don’t know that I’ll have a Pavlovian response or anything, but if someone says they want to venture out to Ikea, I’ll go.  As long as we have at least three hours to kill.