Seems like not long ago, Corillian was acquired by CheckFree.  Now CheckFree’s been acquired by Fiserv.  (The deal closed today.)

We put the [fake] Christmas tree up yesterday and decorated the house a bit.  It sort of got that nice, cozy holiday feel to it.

Both of the cats started promptly chewing on the limbs they could reach, in many cases actually swallowing the nylon needles they were able to extract.  While my cat seems more interested in the act of chewing than the actual extraction of needles, Jenn’s little wild man seems hell bent on a combination of destruction and consumption.

Woke up this morning and found about eight cat puke spots in various places throughout the house.  Most had nylon tree needles, I’m sure from both cats getting their fill.  Awesome.

To top it off, Jenn’s cat decided that it was time, finally, to pee on the new couch we just bought at Ikea.  We know without a doubt it was Jenn’s cat this time because there is no way my female cat could have peed all the way up the arm of the couch quite like that.  We had thought that he was just doing that to furniture that didn’t smell like him or something, but it seems to be… well, fairly arbitrary.  Again, awesome.

So things are pretty well coming together for a great holiday season.  Granted, the Trans-Siberian Orchestra concert was a big plus to the start of the season, but now that the good stuff’s out of the way, we’re getting settled in for a good old-fashioned Griswold family Christmas.  Where’s the Tylenol? 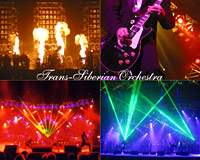 Yesterday we went to the Rose Garden to see Trans-Siberian Orchestra in their 2007 tour.

I mean, I’ve seen my share of concerts, but these guys really do it up right.  Lights.  Set pieces.  Fire.  Lasers.  Freaking snow.  Oh, yeah.

The first part of the show is their Christmas fare.  They use their music to tell the story of an angel crossing the world looking for something that represents Christmas.  Some of the music is the well-known stuff you’ve heard on the radio and some of it is original music and lyrics.  I won’t lie; I’m not as into the original stuff as I am with the updated arrangements on old standards, but it’s all really well done and the story is told very well.

The second part of the show is what they refer to as “play time.”  They break away from Christmas music and play other pieces, mainly rock and roll arrangements of other classical tunes.

Let me tell you something:  You have never heard “O Fortuna” or Beethoven’s Fifth until you’ve heard them done by Trans-Siberian Orchestra.  The standard arrangements are, of course, classics, but the TSO versions are invigorating.  Life gets brought back to these pieces in a way it’s hard to describe.

What really made the show is that you could tell every one of the performers lives to do this.  They looked like they were having the time of their lives up there on stage, making music, having fun.  You wouldn’t imagine you could rock a violin, but Anna Phoebe, their violinist, does it.  Duelling electric guitarists show each other up on stage, the loser slumping his shoulders and pouting his way off stage.  A medley of fast-and-furious piano solos ends up with Vince Guaraldi’s “Linus and Lucy.”  Heads bang, hair is flipped, musicians charge through the audience.  The energy is high and every single one of the performers is almost literally glowing with the fun they’re having.

If you get a chance to check them out, definitely do.  The music on CD is good, but it’s nothing compared to the live production.  I’ll be there again next year, no question about it.

I noticed, about a month ago, that whenever I would log in to Windows Live Messenger, I’d get a little toast popup telling me to verify my email address: 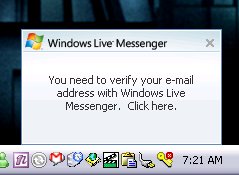 I clicked, I followed the verification process, and I thought everything was cool.  Not so.  The prompt kept coming up.  On subsequent times I tried to verify my address, though, it would tell me that I didn’t need to verify.  What gives?

I had recently taken advantage of the “linked ID” feature of Windows Live IDs.  The misleading thing here: I did need to verify an email address, just not the one I was signing in with.  Curiously, signing in with the other IDs didn’t prompt me to verify… but that’s neither here nor there.  After fighting my way through support for a month on this (and specifically asking them if it had to do with my linked IDs), it came back that, yes, it was something to do with one of the other accounts.

Anyway, if you’re getting prompted and you recently linked your IDs, it’s probably a problem with one of the linked accounts.  Make sure they’re allverified. My dad was headed to work yesterday and hit an icy patch in the road.  His car spun 180 degrees, went into the ditch, and hit a tree.

He’s okay, albeit on some serious pain killers and with some chipped vertebrae.  No one else was involved or injured and after some physical therapy and some time to rest up, he should be good as new.

Here are some pictures of what was left of his car.  Absolutely totaled.  He had to climb out the passenger window because the frame was so bent up neither door would open.

Of course, the thing he seems to be most concerned with is that, somewhere in the chaos, he lost his glasses.  Heh.