For our second anniversary, Jenn and I packed up for a week and headed down to sunny southern California to visit Disneyland and Legoland.

We flew down on October 14th and were hoping to get there in reasonable time, but we had some fairly serious delays due to mechanical troubles on the plane, so we spent most of the day stuck in the airport. Luckily, we planned a “travel day” on either side of the actual vacation, so this didn’t hinder us too badly. 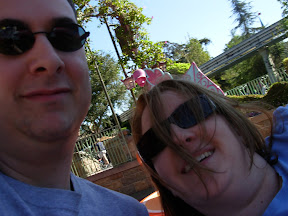 The 15th was primarily Disneyland. We stayed at the Disneyland Hotel, so we took the monorail into the park first thing in the morning and while everyone else was working front-to-back on the park, we worked back-to-front. The first rides we did were the Mad Hatter’s Tea Party and the Alice in Wonderland rides because Alice is, by far, my favorite Disney character. Jenn wasn’t expecting much from the tea cups, but Ireally cranked that thing around and we both left pretty dizzy. (A kid coming on the ride after us literally ran to get our cup because “it was the fastest one out there.” Heh.)

We continued on through Fantasyland and then went through into Tomorrowland to enjoy some classic Star Tours action. After Tomorrowland, we hit Adventureland, stopping in at the Jungle Cruise and Enchanted Tiki Room, then through to see the Pirates of the Caribbean (which has been updated to match the movie). We came back to ride the new Indiana Jones ride and, while it was fun, we ended up having to ride twice because the first time we rode, it broke down and we got stuck on it (with the lights on and everything) for quite some time. We finished off that first day watching the characters parade down Main Street, USA. 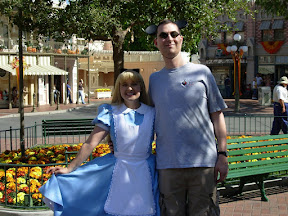 The 16th we started the morning with a character breakfast at Goofy’s Kitchen, an all-you-can-eat buffet of just about anything you’d ever want to eat. Princess Jasmine and Princess Aurora were there, as was Goofy, Chip and Dale, Pluto, and Baloo. It sounds silly, but it was actually very fun (and great food). 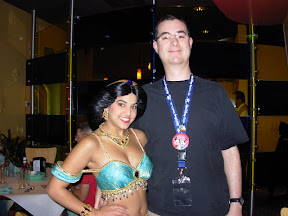 Following breakfast, we spent the day going through California Adventure. California Adventure is less about the Disney cartoons and more about celebrating the nostalgia of California history. While there’s definitely some kid stuff here, I think it’s more adult-oriented because smaller kids aren’t going to know what stuff like the California Zephyr are.

We saw the Muppet Vision 3D movie, rode the taxi through Monstropolis (from Monsters, Inc.), checked out the various Bug’s Life things, and then wandered around on the boardwalk enjoying the rides and the food. We finished off the day in California Adventure watching the Pixar Play parade - a parade of Pixar movie characters.

Since California Adventure closed relatively early, we sauntered back over to Disneyland to see the Haunted Mansion (now done up in Nightmare Before Christmas style, and particularly so since it’s Halloween time) and ride Splash Mountain. Let me tell you - you can get into Splash Mountain easier later at night, but you really get soaked down and it doesn’t dry up too well. Jenn and I walked the park soaking for quite some time after that. 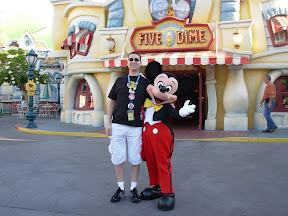 The 17th was dedicated to picking up rides and areas of the park we didn’t get a chance to see. We started the day in Disneyland and enjoyed the morning ceremonies in Toontown, getting our pictures with Mickey and seeing other characters as well. After that we went back to Fantasyland and took a cruise around Storybook land, seeing miniaturized versions of significant storybook locations. We started getting tired after that so we headed over to Tom Sawyer’s island and, after that, rode the Mark Twain riverboat.

The day was pretty hot, and we were worn out, so we took a breather back at the hotel for a bit before returrning to the park and riding the California Screamin’ roller coaster in California Adventure, then finishing out the day watching an amazing fireworks display over Cinderella’s Castle in Disneyland.

The 18th we checked out early from the hotel and drove the hour or so south from Anaheim into Carlsbad to see Legoland. Our hotel, the Sheraton Carlsbad Resort and Spa, had a private entrance to the park, so we headed right into the park without having to wait in line at the beginning.

The phrase of the day was, “Hey, check out that <insert noun> made out of Lego!” If you’ve ever seen a Lego show, or been to a Lego store and seen some impressive models, Legoland puts all of that to shame. Particularly the “Miniland” section, with full city replicas of well-known US locations. It’s spectacular from a Lego perspective… but the rides and attractions are definitely geared toward the younger (3 - 13) set. There’s really only one ride there for the older crowd: The “Knight’s Challenge,” which is basically a robot arm from a car manufacturing plant that someone welded some chairs to. You get in the chair and it thrashes the living crap out of you. An awesome ride, to be sure, and proves that it doesn’t need to have rails to be a good ride.

Another thing we noticed: Lego really hasn’t taken advantage of all of the merchandising opportunities it could. There were only like five or six different shirt styles that said anything about “Legoland” on them; everything else, including the Lego sets, were all things you could get at a Lego store or on their web site. There were a lot of things I wanted that simply didn’t exist. Here’s hoping they figure that one out. 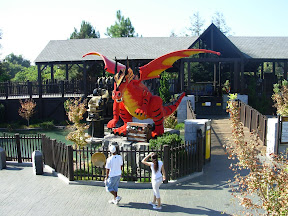 Since we finished out Legoland in a day, we took the 19th to sleep in and rest our feet. Grabbed some breakfast at IHOP, drove down to see the Hotel del Coronado, and basically were lazy, which was nice.

The 20th saw us checking out from the hotel in Carlsbad and driving back to LAX to return the rental car and grab our plane home. Again, due to misjudged timings and such, we spent most of the day traveling.

All in all, it was a great trip. I really do love Disneyland and it was great to be a kid again. It’s sort of like going to Las Vegas (which I also love) but with less sin. I will definitely have to find another opportunity to go, or maybe hit Disney World in Florida so i can see Epcot. I probably will wait a while before going back to Legoland, to see if they do some renovations to address the older set or add some new models. Good times.

UPDATE: Either the client sucks or there’s some oddness with the MetaWeblogAPI implementation in my version of Subtext. Either way, not good. Maybe this is my opportunity to learn Blackberry development. Until then, Opera Mini to the rescue!

I don’t generally get into politics, and I can’t remember really ever posting anything political here, but I have to put this up because it is, by far, my favorite political commentary ever. It’s a clip of Jack Cafferty, a political analyst for CNN, talking about Sarah Palin’s interview with Katie Couric.

It’s like Saturday Night Live, only real life. I’ve watched this like 10 times now and I fall down laughing every time. It’s all about Cafferty’s deadpan delivery. I think I’m gonna go watch this again.

We had a fresh layer of barkdust blown in yesterday. We do it every two or three years, and getting it blown in (rather than spreading it yourself) is far and away a better way to go.

I always forget what kind of barkdust we get, or who we use, though, so it’s always a pain to get it scheduled for the next time. This time, I’ll blog it - so I can find it again later!

We used Grimm’s Advanced Bark Blowing. We’ve had ProGrass do it before, too, but they’re slightly more expensive. Grimm’s does a really good job at a decent price. Done and done.

Overview of My Media Center Solution

UPDATE 7/8/2015 - All current documentation for my media center and home network is at illigmediacenter.readthedocs.io.

Now that I’ve solved my media center problem, let me do a review of what I was trying to do, what I did, and some of the lessons learned along the way.

Goals of my media center solution:

What I settled on:

I set up the “DVD Library” in Windows Media Center rather than using the popular My Movies plugin because, again, I really wanted as few “moving pieces” as possible and My Movies didn’t seem to offer me anything I truly needed. If, at some later time, I want to start using it, I haven’t engineered myself out of it - I can install it and import the movies that already exist with a minimal amount of work.

I rip my DVD movies onto the Synology DS1010+. The Dell Studio Hybrid PC, which is connected to the TV in my living room, reads the list of movies from the NAS over the network and displays them beautifully on the TV for me to select from. I was running this nicely over wireless, but started running into interference issues, so it’s now a wired network.

My photos are accessible through not only the Windows Media Center, but also through my Xbox 360 and PS3 via the DLNA sharing that comes for free out-of-the-box with my Windows Home Server.

My music is accessible to DLNA compliant devices (Xbox 360, PS3) through Asset UPnP on the Windows Home Server. Windows Media Center doesn’t natively play Apple Lossless (though with Windows 7 it does play AAC) so I don’t have it running through the Media Center.

Here’s a picture of the current network topology, with a little added detail around how things connect to my TV. It’s pretty simple, not a lot of moving pieces, and the majority of things are wireless. As much as possible is also connected directly to the network (like my printer) so I can access anything from anywhere. 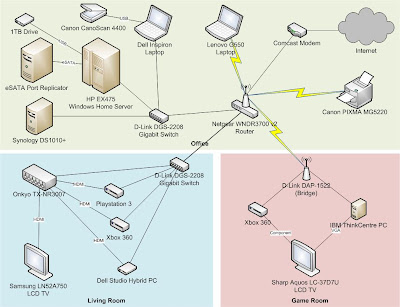 So, now that it’s done - two years in the making - what am I going to do next?

I’ve done a lot of work to get this far, so there are quite a few related posts I’ve made that may be of interest. (Most of these, and more, are linked in the above article, but for your convenience, here are some highlights.)