The Hell of Crown Moulding

I’m pissed off with home improvement.

See, the thing is, I’m not really handy. I like to think I am. I can put up a new light fixture with the best of them. Tightening screws on squeaky chair legs or whatever, I have that covered. Much more than that… I’m sort of at a loss.

About three weeks back my dad helped me fix some baseboards that had water damage. At the time, I figured I had put off this crown moulding project in our downstairs bathroom for seven years already and it was probably time to undertake that, so I decided to pick up some crown moulding to put up. Couldn’t be that much different than baseboards, right? Just baseboards at the top of your wall instead of the bottom, right?

The best advice I can give you: If you want to put up crown moulding, call The Guy.

When I say “The Guy,” I’m talking about any contractor who will come in with experience in the crown moulding arena and put it up for you in a professional fashion. In conversation, you might refer to this person as “your crown moulding guy” when you hand a poor sap like me his (or her) business card.

I had what I thought to be all the right equipment. I had the compound miter saw. I had the angle measuring tool. I was all set to go.

I measured out the first couple of pieces and the angle between the walls, cut them out, and put them up. They looked awesome. See? I even took a picture: 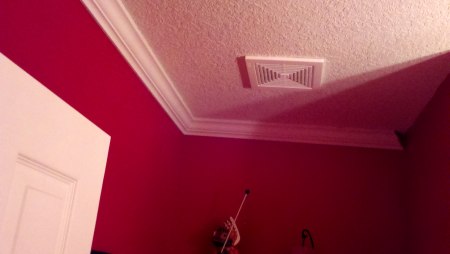 Nice crisp corners, all professional. I was stoked.

Then I tried to fit the next piece in. I could get one corner in place, but the other corner… didn’t fit quite right. It wasn’t too far off, though, and I figured a little caulk and I’d be good. I muscled forward.

Corner after corner, things started getting further and further off. That was when I noticed something:

The corners from wall to wall are square, but that’s the only thing in the bathroom that is. There’s one wall where the ceiling makes sort of a “wave” where it connects to the wall, going up and down rather than straight. On another wall it’s even worse - you take the crown moulding, run it from one corner to another, and there’s a gap between the crown moulding and the ceiling so big I can put my fingers in there.

But I would not be deterred! I could flex the moulding into place! I could fill that gigantic gap with some patching plaster! It would work!

Two or three hours a night after work for a week and we get to the weekend. I stand back and look at the horrendous corners, the places on the ceiling where I got a little carried away with the patching plaster and filled in the texture, and the ridiculously obvious use of wood filler in areas, and… it was unsalvageable. I showed Jenn and she concurred.

I tore the moulding down, took it out back, and chopped the shit out of it with an axe. You know, so it’d fit in the garbage can better. Right? Right?

I chipped the patching plaster away from the ceiling, spackled up the nail holes, and retextured the ceiling where the plaster got out of hand. All we had left to do was paint the spackle areas…

…Except Home Depot doesn’t sell the paint we used for that bathroom anymore, so we had to get a color match. No problem there, we got the color matched perfectly…

…Except we didn’t get the sheen matched right, so we had some shiny spots and some matte spots where the different paint was used, which resulted in having to repaint the entire bathroom.

All of the patching and retexturing and painting and everything was another hour or two each night for a week. Two weeks, many hours, and around $100… and we’re back to square one. Maybe I could have just handed someone $100 to come over and kick me in the nuts and we could have called it a day.

What this boils down to is: Call The Guy.

I wish I could say this was the end of our current home improvement troubles, but it’s not.

A few nights ago we were sitting watching television and we heard a big “thump” like a bird hit the back sliding glass door. I went out back to see what was up and didn’t see any bird, so I went back inside. As I did, I tried to shut the screen door and it just wouldn’t shut. Investigating further, it turns out the frame on the door was flexed out of shape, dented in a certain spot, so now it doesn’t slide on the track right. Oh, and look over there, in the middle of the back porch there’s a river rock the size of a baseball. How the heck did that get there? (Putting two and two together, I’m guessing someone threw it, so I’m glad it just hit my screen door and not the glass, but still.) So now I have to get a new screen door ($45) which is not a huge deal except that I can’t actually fit a screen door into my car, so I have to get some help trucking that home. It’s never simple.

Oh, and our Scooba just died, so I’m going to have to get a new one of those. And Jenn’s car has something up with some belt or another, so that’s gotta get fixed. Man, it’s always something.