I’ve been having some trouble with my Windows Home Server involving some potentially misbehaving hardware when put under load. This really only manifests itself when I run PerfectDisk to defrag it, but I’m gathering it’s really a hardware or driver issue and not PerfectDisk’s fault. When you defrag the server will entirely hang up until you reboot it. Occasionally I’ll get file conflicts or lose my backup database. Not great.

Anyway, I have a lot of data stored on that Windows Home Server - terabytes of DVD rips (from discs I own) - and with the problems I’m having, it doesn’t give me a lot of confidence, especially since I can’t turn on file duplication given the size of the data. I don’t have enough storage to handle keeping double copies of it. Not only that, but I’ve noticed that, on occasion, just streaming the DVD rips (not HD, just regular old DVD rips) can get a little slow. Again, not great.

Since the WHS works for music and backups and other videos reasonably well, I figured I’d find a solution to move the DVD rips to and get them off the WHS. Once they’re off, I can remove some of [what I believe to be] the problem drives and figure out what the real issue is. Either way, finding a different NAS solution for my DVDs is a must so if a hard drive goes out, I don’t have to re-rip a bunch of stuff.

I did some research on NAS solutions that support RAID of various levels and I ended up on the Synology DS1010+. Why?

I picked the diskless NAS up at Amazon for $980. Next, drives.

Synology has a compatibility list for the drives it supports in its various devices. For the DS1010+, drives basically fall into two categories: “We’ve tested it and it works” and “It should probably work.” Given my current hardware issues, I wanted drives that were in the “We’ve tested it and it works” category. I wanted 2TB drives, I wanted reasonable performance (it doesn’t have to be an SSD to store DVD rips), and I didn’t want to go broke on it.

Interesting side note on my Windows Home Server issue: While I was researching drives, I came across a note in the Synology forums talking about issues people have seen with WD Green drives - the drives I have! Even on the Synology compatibility list you’ll see that there are only a couple of sub-models that performed reasonably in testing. I went through my drives on my WHS and it turns out only about half of them are the decent/peformant models; the others are models that have tested as poor and degrading performance over time. That very well could explain my problems. After I get my DS1010+ set up with all the DVDs moved over, I’ll be removing the problem disks to see if that fixes things.

UPDATE 6/16/2010: Removing the problem drives appears to have stabilized my WHS.

I got the NAS and the disks today. Love that Amazon Prime. Here are the boxes and then the unbox: 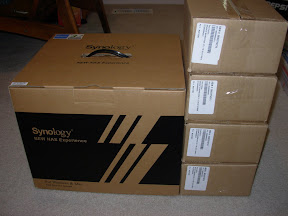 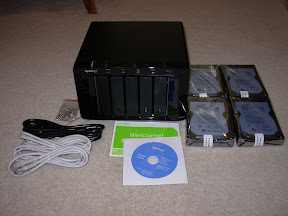 I installed all of the drives following the instructions in the quick start guide (very easy), plugged it into my UPS, connected it to the network, and turned it on. Here’s the NAS under my desk. From left to right: Synology DS1010+, Tripp-Lite UPS, Rosewill RSV-S5 eSATA port replicator, and HP EX475 Windows Home Server. You’ll notice that the DS1010+ is about the same size as the Home Server, just laid out horizontally instead of vertically. 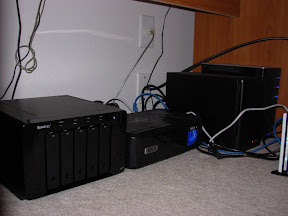 Once it was plugged in, it was time to install the firmware. To do that, you use a program called “Synology Assistant” that installs on your client computer. The Assistant detects your NAS and allows you to install the “DSM” or “DiskStation Manager” software/firmware over the network. It’s a lot like installing Windows Home Server in that respect

I downloaded the latest Synology Assistant and DSM patch from the Synology download site rather than using the ones that came on the included CD. I wanted to be sure I had the latest version of everything rather than installing an old version and upgrading later. I unzipped it all in a folder and away I went.

I installed the Synology Assistant and there was a second of panic when I couldn’t find the icon for it in my Start menu - the reason is that I was running as a non-admin user and the installer only installs a shortcut for the user it installs under. In this case, the local machine Administrator was the credential set I entered when the installer asked for better credentials so that’s who got the icon. Rather than log out and log back in, I just ran the DSAssistant.exe program found in the install folder.

After unblocking it from Windows Firewall, I got this screen showing the detection of the DS1010+ and that no firmware was installed. 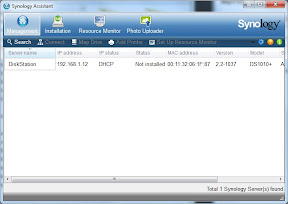 I double clicked on the server and it took me to an installation screen. First, I selected the DSM “patch” I had downloaded. 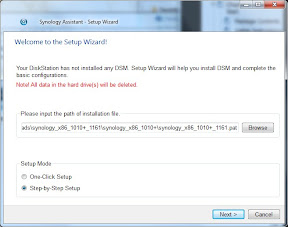 Then I walked through setting up the name of the NAS, the admin password, network settings, etc. Note that I used the “Step By Step” setup rather than the “One-Click.” Seeing as how I left everything as defaults except the administrator password, the one-click setup probably would have been fine.

After finishing the install, I went back to the Synology Assistant management screen (using the icons at the top) and it sort of freaked me out because the server status appeared hung on “Starting services.” I did a manual refresh (using the not-so-intuitive “Search” button) and the status updated to “Ready.”

I selected the DiskStation and clicked the “Connect” button which brought up the web interface to log in. I could also have just gone to port 5000 on the DiskStation by manually entering a URL in a browser. 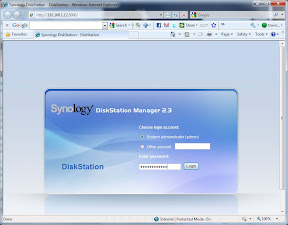 After logging in, I went into the “Management” section and then into Storage -> Volume Manager, which automatically started the Volume Creation Wizard. I used the web-based wizard to create a RAID 5 volume out of the installed disks. Two notes on this:

Once the volume was created, I wanted to make sure the disks were running in good order, so I ran an extended SMART Test on them. Granted, it’s not like a major stress test or anything, but it’s good to check what the drive’s reported condition is. 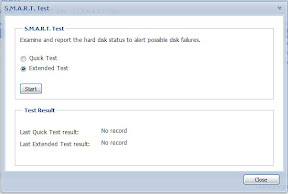 I let that run because the extended test takes 255 minutes. In the end, the results came back “Normal.” 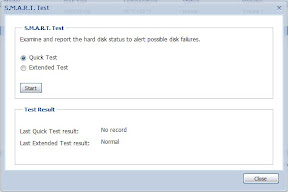 And here’s the detailed info for one of the drives: 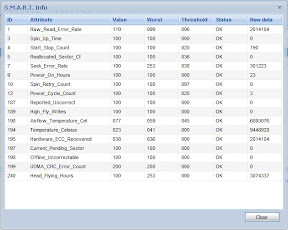 So, the disks seem to be working.

I noticed is that these particular drives are not always quiet. When they “woke up” the next morning (I left volume creation running overnight and logged in the next day), there was a noticeable amount of disk noise coming from them. I’d read a little about this in some of the user reviews. During the SMART Test, and even during the volume creation, they were reasonably quiet, but I/O can sometimes be a little noisy. They appear to test out, though, so if it’s just noise, I can handle that. It’s under my desk in the office, not sitting next to my TV while I’m watching a movie. 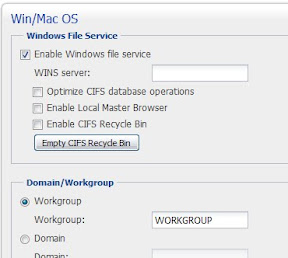 I then went in and created a user account on the system for all the users in the workgroup. I made sure to give them the same usernames and passwords as on the local machines so the Windows pass-through auth will work. 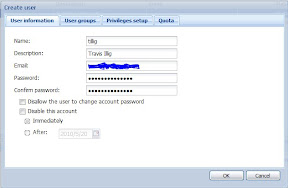 Finally, I had to create a shared folder for my DVDs to be stored in - also easy: 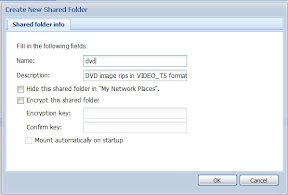 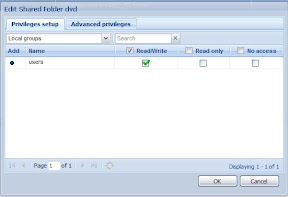 Note that I left the permissions read/write for the default system group. Since all the users are in that group, it means everyone has read/write permissions, which, for my purposes, is perfect.

From a general user standpoint, the web-based management utility is really nice and clean. If you didn’t know better, you’d think you were using a native application. It’s a little more confusing than the WHS console, but then, it also does a lot more right out of the box.

Last thing to do is a little [really rough] speed test. I decided to copy a DVD rip I had made to both the home server and the new NAS. I used the speed estimation thing that shows up in the Windows copy dialog box, so it’s not, like “a benchmark” so much as a general indicator. Also, my laptop only has a 100 Mbit card on it so even though I’m connected to a gigabit switch, it’s negotiating down. (I tried a wireless N connection where I was getting 135 Mbit but various network interference and such, which is horrible in my house, ended up making it slower than a wired 100 Mbit connection.)

Considering that I’m actually getting some level of data protection and a slight boost in speed, I can’t really complain. With my WHS setup, if a disk goes, I’m re-ripping. With the NAS, I’ve got a little RAID 5 overhead but I’m protected if a disk goes.

Also, again, it’s 100Mbit connection, so ostensibly with an actual gigabit connection I could get 10x the speed. I’d be curious to see the results with that. Maybe I’ll have to get a different adapter or try a different computer.

This sort of helps me in diagnosing some of the issues I’ve been seeing with Windows Media Center and DVD file sharing. I wonder now if maybe my media center PC is potentially a little underpowered to be driving a 1080p display. Maybe. I digress.

All in all, with the benefits listed earlier, I think this is a good move. I think the peace of mind alone will probably make up for the cost. Maybe that’s just me.

Anyway, I’m going to get my DVDs moved over to this and decommission some of the problem drives on my WHS and see how that goes.

UPDATE 5/6/2011: I had an opportunity to talk about my experience with the DS1010+ on the Hanselminutes podcast with Scott Hanselman.