The Killers @ The Memorial Coliseum 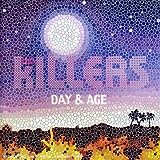 Jenn and I went to see The Killers last night at the Memorial Coliseum. It was awesome.

Now, the opening bands - there were two - not so great. First up was The Nervous Wreckords, which we were a little late for, and Jenn fairly accurately described as “15 minutes of pain.” After that came Mariachi El Bronx, which was sort of modern-ish mariachi music. I didn’t think they were horrible (Jenn did), but it wasn’t great, either.

The Killers, on the other hand, put on an awesome show. They sang all the hits from their albums as well as a few lesser known songs. Jenn and I did our little “stand up by your seat and bob your head” dances for part of it. The thing I noticed was howinto it their drummer gets. The guy’s a wildman - great on the drums and really fun to watch.

The crowd was great, really into the whole thing, and all-in-all it was a fantastic show. Totally worth the price of admission.

Jenn got her very first concert shirt ever at this show, too, so a groundbreaking experience was had by all.