For my media center solution, I’m using a Windows Home Server as my primary storage for everything - music, photos, DVD images, videos, computer backups… the whole shmear. I love it. I bought the 1TB HP EX-475 model and did a few upgrades, adding memory and filling out the drive bays.

After ripping all of my movie DVDs to the server, I had about 470GB left

I considered adding storage through USB drives, but they recommend only plugging directly into the server’s USB ports and not using a hub… and there are only four ports. I know I’m going to use one of them soon for off-site backups. So… how to add drives in a scalable fashion?

The answer: Use the eSATA port on the back of the home server. 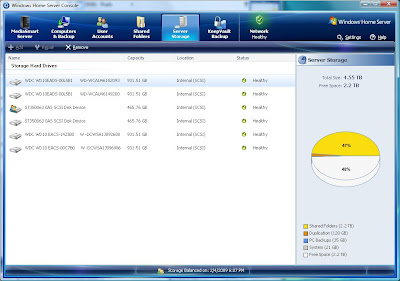 The nice thing is I have three more eSATA bays free in the port multiplier so I can easily continue expanding. Plus I haven’t taken up the USB ports yet so I still have all of that to go, too. An easy upgrade that enables even easier future upgrades - you can’t beat it. Next to adding RAM, I’d say this is the most valuable thing you can do to your home server.

UPDATE 6/16/2010: Beware the WD Green drives. Only some of the model numbers perform well. I ended up replacing some of the ones I had bought when I originally wrote this post.