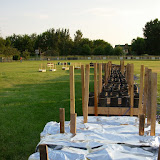 The fireworks shoot this year was once again in sunny Walla Walla, Washington.

We left Hillsboro a little after noon on Thursday, July 3 and got up to Walla Walla around 5:00p. We checked in to the Super 8, which was way better than the Travelodge from last year, and had dinner with the rest of the crew at the local Applebee’s.

Friday the fourth found us hauling gear off the truck and setting things up around 7:30a. We had another good crew this year, a total of ten of us. The setup went pretty quickly and we checked, double-checked, and re-checked everything as the day went on, just to be sure everything was hooked up safe and ready for action.

At 10:00p the show started. It was electrically fired and Greg was at the helm. I stood by in case any of the shells failed to go off. It’s a good thing I did, because we had a couple that the electronic firing didn’t catch, so I ran out there with a high-tech solution - a road flare (fusee) attached to a stick - and hand-lit the couple that didn’t go off. The show went off great and we had a good crowd cheering us on.

After the show, we loaded the equipment up on the truck and did a first run at cleanup, making sure nothing dangerous was left behind, and headed back to the hotel.

Saturday the fifth we checked out and were back at the field for final cleanup by 9:00a. Cleanup was a couple of hard hours raking and picking up shell casing fragments, then took on the four-hour drive home. (We actually went straight to Jenn’s sister’s birthday party without stopping at home, so it made for a bit of a long day.)

The weather was about 20 degrees cooler this year and it was way better that way. Thank goodness, too, because I don’t think I could have stood it much hotter.

I think next year we’re going to see if we can get a show a little closer to home. Walla Walla’s a good show, but it being a three-day-affair is a little much for us. It’d be nice to get something local, like the Oak Hills (Beaverton) show. We’ll see what happens.

I posted some pictures of the setup, but I didn’t get any photos during the show. Actually, I got video of the shoot, and I’m going to see if Greg can cobble it together with his video and produce something really nice. I’ll link to it when it’s up.