We painted the master bathroom this weekend and I realized that painting, for me, is a lot like Twizzlers. Stick with me.

The problem is that Twizzlers so convincingly resembles red licorice from the outside that I forget how nasty it is. I’ll be craving red licorice, see a Twizzler, grab it, eat it, want to die, and remember how bad it is. I might remember it for like six months or so, until one day my red licorice craving gets the better of me and I see a Twizzler, take a bite, then smack myself repeatedly in the forehead Rain Man style screaming, “STUPID! STUPID! STUPID! Twizzlers is not red licorice!” And another six months will go by before I forget how bad it is again. Rinse and repeat.

I hate painting. Hate it. It’s messy and it takes a long time and I always underestimate the amount of effort it’s going to take to get the job done. My attitude over the course of a painting job changes for the worse, too. I’ll start out sort of cheerful, singing my Happy Working Song, and six hours later I’m ready to kill.

But, like Twizzlers, after about six to nine months, I always forget.

This time, we were looking at the master bathroom, thinking how drab it was. It was painted in the color “Arbor White,” which is a special off-white color that Arbor Custom Homes uses when it builds houses. (If you want touch-up paint, if you go to Home Depot and ask for “Arbor White,” they know. There’s no paint chip or anything, they just know.) The problem is, if you hold real white up to it, you would probably want to call it “Arbor Brown” because it’s not remotely white.

Anyway, we were gazing into the gaping Arbor Brown maw that was our master bathroom, thinking how drab it was, when we decided it needed a coat of paint. It having been probably a year or more since I last painted, I forgot that I vowed not to paint again, so we ran down to the Home Depot and picked up some paint. We ended up with a scheme similar to the following, with “Drowsy Lavender” as the main color. (This isn’t exactly it, but I don’t remember the exact colors. It doesn’t really matter.) 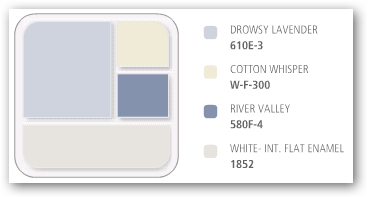 We started painting on Saturday and we got about halfway done in five hours or so. Some primer and a first coat on the walls and the ceiling. At the end of Saturday I was in Twizzlers-land: “STUPID! STUPID! STUPID! Painting sucks!” Of course, we were sort of committed by then, so we had to finish.

We spent several more hours on Sunday trying desperately to finish but failing miserably. We got the second coat on the walls and the ceiling and we started on the trim.

So we’ve got to finish the trim this week and do some touch-ups. Probably another couple of hours’ worth of work. I wondered how people on Trading Spaces did all of this in two days, but then Jenn reminded me that it’s not just two people - there’s a team of people behind the scenes. Maybe if Laurie showed up it would be better, but probably not.

I swear I’m going to remember this time: Hire someone to paint. Painting sucks. It’s always more work than you anticipate and it makes you grumpy.