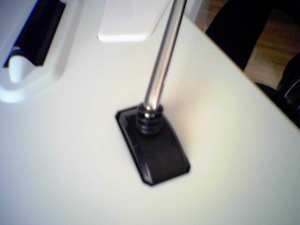 Problem: You have a Guitar Hero II X-Plorer controller for Xbox 360 and the whammy bar is loose. You want the whammy bar to tighten up without having to take apart your guitar and you don’t want to go through the exchange process with RedOctane.

The o-rings will generate just enough friction to make it so the whammy bar moves easily but will stay in place when you let go, leaving it in easy grasp for the next time you need it. Putting multiple rings on will keep the bottom one from slipping away from the guitar body and losing friction. Getting them to the bend in the whammy bar makes it just that much more secure because it’ll take more effort for the rings to round the bend and come loose.

Too Much Detail: I tried several ring sizes and materials to get here. Size 8 is just big enough to barely go over the whammy bar end and still fit snugly around the bar proper. Neoprene is the right material because other materials either don’t stretch quite enough or don’t offer enough friction. For example, I bought some rings from the Home Depot plumbing section that had an “oily” or “slick” feel to them because they were probably Buna-N and treated for resistance to oils and liquids. (I blogged about how I was learning too much about o-rings.)

Where To Buy: I bought my o-rings at McMaster-Carr. In the search box on their site, put “AS568A” and it’ll get you to the o-ring page. From there, select the “AS568A Dash Number” as “8” to get the ring size set. Finally, select “Neoprene” as the material. As of this writing, they only carry one product that matches those criteria. It’s a bag of 100 o-rings that costs $2.48 (no, you can’t get a smaller pack or buy individual rings - they’re an industrial supply store, not a consumer goods shop). Shipping was about $5 via UPS ground for me.

We tried this out last night in a feverish game of GH2 and it works pretty well. The rings never had to be pushed down or adjusted, it just worked. A sub-$10 solution and not having to actually open up the guitar? Can’t ask for much more than that.

UPDATE: While I’m happy to help folks out, I’m not in the o-ring business.  If you want some o-rings, head over to McMaster-Carr and pick some up.