How Do You Tell If Two Objects Can Be Added?

I’m working on a DataGridColumn that can automatically sum up the data in the column and display a total of the data in the footer. This sort of thing comes in handy when displaying tables with account activity or balance data in them and allows you to just put the special column type right into the DataGrid without having to modify your page behavior to do the summation.

So I created my column class have it set up so when the column is databound, each cell in the column will contribute its bound value toward a total. That’s where I ran into a snag - since I don’t know what object type is being bound to the column, my “total” variable is just an object… and base objects don’t support addition.

How do you tell if an object type supports addition?

That’s actually something I can’t answer. My original thought was that when you override the addition operator, the compiler generates a static “Add” method for your data type. You can see this in Reflector. Here’s the System.Decimal class: 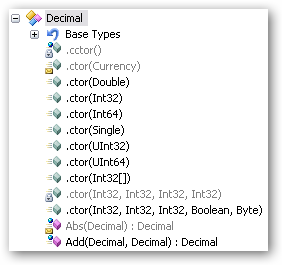 My idea was that I would get the first object being bound to the column, get its type, and see if it had a static method called “Add” that takes in two objects of that type and returns an object of that type. If that method exists, I’ll hold a reference to it and invoke it for every subsequent data item being added.

The problem is, this static “Add” method doesn’t show up for other base types. For example, there’s no “Add” method for System.Int32:

So that idea won’t work.

I talked to Hanselman and Sells and they both thought the “Add” method would be there. No such luck.

Right now I’m working around it by special casing all of the types in mscorlib that I know we use that can be added together… but is there some better way I can, through Reflection, determine if two objects can be added (and then actually perform that addition)?