Game With The King 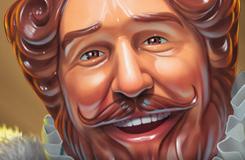 Burger King has this crazy promotion going right now where you can get three Xbox/Xbox 360 games for $3.99 each when you get a value meal. The games are:

Sneak King: You sneak around as the Burger King and surprise people with food. It’s sort of creepy and extremely novel. It gets a little repetetive after a bit, but it’s still pretty fun. This is my favorite of the three.

Big Bumpin’: You and three other players (local or over Xbox Live) drive bumper cars around in a variety of competitions. This is a pretty decent party game, but there are only four courses and four game types, and you don’t pick them individually - there are a certain number of pre-set combinations of course and game type. Not super flexible, but still fun.

PocketBike Racer: You and three other players (local or over Xbox Live) drive miniature motorcycles around courses. It’s basically a slimmed-down kart racing game. You have some weapons that don’t seem to come in too handy and the controls are a little sloppy. Of the three, this one is my least favorite, but I can’t complain much for $4.

They have a whole BK Gamer web site where you can see more about it and the leaderboards for the games. You can even add the Burger King as a friend (Gamertag: BurgerKingGWF). If you get a chance, head out to BK. It’s too novel to pass up.

« Not a Thanksgiving Fan
The Tree Is Brighter »