Once again, as is the seeming custom for the past three years, Jenn and I trekked out to Clatskanie to do the fireworks show with Greg.

This time, I got some photos of the trip, so folks who aren’t native Oregonians, or even folks who are, who somehow always tell me about how “beautiful the drive is” around these parts… I got photos to show you it’s not all that.

First, we packed up the car with all nature of interesting things: 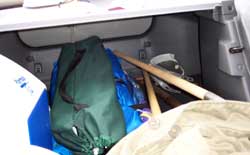 We updated the list from last year, removing a few things we didn’t end up needing and adding a few we decided we did:

To that list next year, we need to add one (1) box Imodium (don’t ask) and we will probably have to substitute some pseudoephedrine analog since Oregon has screwed all cold and allergy sufferers with their new anti-meth laws and now pseudoephedrine, the only working decongestant, requires a prescription. Thanks, Oregon, that’s really solving the issue. But I digress.

We packed up shop and set out for Clatskanie. 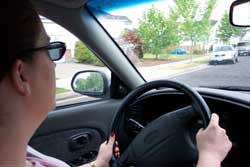 The next two photos show what the trip looks like. Again, this is for those folks who keep insisting the drive is “so beautiful” or whatever. The whole trip is one of these two ways: 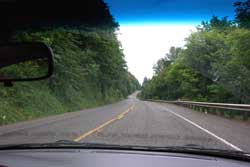 Once you get to the small town of Clatskanie, you are welcomed with a sign: 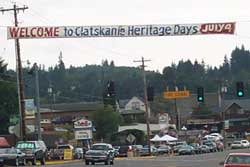 The sign - “Welcome to Clatskanie Heritage Days” - is interesting because it’s only one day, to my knowledge. Just the Fourth. Not “days,” but “day.” Heh.

Okay, so you get into Clatskanie and you have to wait to go down to the fireworks site because people are lining the streets to watch the parade go down the only major street in town. The town’s effectively shut down because you can’t get to an entire side of it, due to the parade. 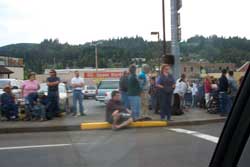 So Jenn and I end up eating at Subway. When the lunch rush shows up to Subway, you know the parade is over and you can get down to the fireworks site.

The wastewater treatment plant is through town and down a gravel road.

In that picture, you can kind of see the yellow fireworks truck in the field on the right. If you can’t make it out, that’s okay - here’s what it looks like when you get there:

The dirt is the trench we get to fill with mortar tubes. The black pile is a few of the tubes - the rest are in the truck.

And, of course, for those curious, here’s the wastewater treatment plant proper (this was taken later, when the truck had been moved away from the trench):

So the big part of the day is putting mortar tubes into the trench that the city dug out with a backhoe for us. Here are the mortars getting set up at various stages of progression: 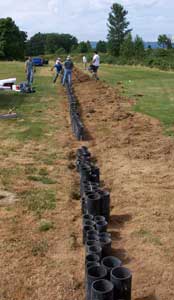 Once you get the mortars buried, you load the shells into them. Here’s the whole thing, set up and ready to go:

The ones at the end have aluminum foil over them to ensure they don’t go off inadvertently during the show due to debris accidentally lighting them. In the middle of the show, if one goes off early, folks won’t generally notice. If the finale goes off early, you’ll notice.

Greg actually kept a decent running blog of the loading process and has some good pictures, if you’re interested. Definitely worth checking out. I think he’ll later be putting up a time lapse video of the setup. I’m stoked to see that. Anyway…

The rest of the day is spent “camping,” sort of hanging out waiting for the show to start. Here’s the group of us in front of the trench. You can see how big the trench really is in this one. It’s gotta be a good couple of hundred feet.

Camping there isn’t too exciting, hence why you bring a book or whatever. I spent some time harassing a nearby llama (talking to it, walking around calling to it, etc.), which was kind of fun. 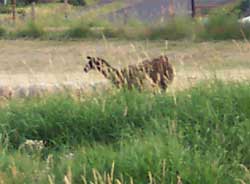 10:00p was showtime, and the show went well (as usual). I lit several and also stood back to supervise some and make sure all the people who wanted to light shells got to, helping Greg swap people in and out.

Cleanup was a pain (also as usual) and my back and neck are sore today from pulling the mortar tubes out of the trench. We ended up getting home about 1:00a, exhausted, dirty, ready for shower and bed.

I’ll definitely be doing it again, but I’m hoping Greg gets off his lazy ass and gets his commercial driver’s license so we can do a different show. The Clatskanie show is fun (and hard work), but it’d be neat to see something different next year.