Every year (at least for the past couple of years now), Jenn and I work with Greg and the crew at Western Display Fireworks to help put on a show for the Fourth of July. (One more show, and both Jenn and I will be licensed pyrotechnicians. Next year!)

This year, the show was in Clatskanie, OR, about two hours out from our house, way out in the sticks.

We got to Clatskanie a little before noon on the Fourth to help set up. The show wasn’t scheduled until 10:00p or so, but it takes a while to get things set up, so better to get there early and get it done than scramble at the last minute.

Unfortunately, we got there right when the Independence Day parade was starting. That means they had the main street through town pretty much blocked off so we couldn’t get down it to where we needed to set up. We decided to hang and watch the parade (nothing else to do anyway, right?).

The parade consisted of three log trucks, a dump truck with the local girls’ softball team in the back, four or five tractors, some kids on four wheelers, a couple of hot rod cars, and five tow trucks from the neighboring town.

The parade lasted about 15 minutes and then we went down to where the fireworks were going to be shot from. This ended up being a field around 75 yards give or take from the local waste water treatment plant.

I think you see the bad moon a-rising, just like I did on this.

The result of being right near an open vat of shit is that any time the wind kicks up, it stinks. Like shit. Bad. Really bad.

We got our lawn chairs out, set up “camp” in the pseudo-shade of a tree, and got to work.

The fireworks we shot were 250 or so four-inch shells and 50 or so five-inch shells. That meant we had about 300 mortar tubes we needed to bury. We were fortunate that the city had brought in a backhoe so we didn’t have to dig the trench ourselves. We did, however, have to set the tubes in the trench and backfill around them. Here’s a picture of the tubes alongside the trench. 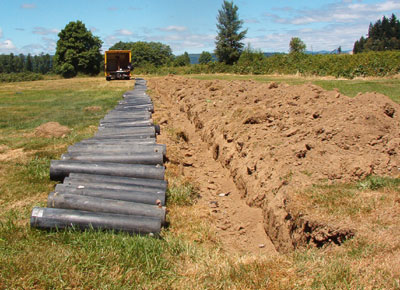 As we got working on that, Jenn grabbed my attention and pulled me aside.

Jenn: Trav… look in the dirt. Trav: What? [fully expecting to see lumps of crap] J: Are you looking in the dirt? T: I don’t see anything. Rocks. J: Look at the rocks. Close. T: Is that…? J: Yes. There are plastic tampon applicator tubes all over in there.

Now, hold on a sec. I had leather gloves, not a fucking hazmat suit. I gotta dig around in that? Yeaaaah.

We ended up getting the mortars all set up and aimed, though. There were like 10 of us there, so it went quicker than you’d think, but it was still a three-plus hour job. Here are the mortars - buried, loaded, and ready to go. 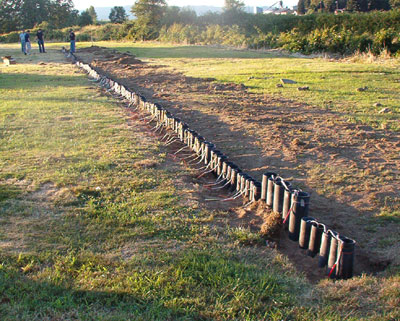 Once we got that set up, we headed into town to get some food. The idea was to eat vendor food at the fair going on in the park.

We got to the fair and it was about one short city block long. Vendors lined the “aisle” selling a bunch of stuff I didn’t need. There were seven food vendors. Four of them sold only elephant ears. The rest sold cotton candy, Thai food, and curly fries, respectively.

We turned around and went to one of the restaurants in town, Hump’s. I’d say it was because of a camel theme (because there were camel-related things in there) except for the giant plastic bull near the front counter. Not sure what to make of that.

We finished eating and went back to the fireworks area to find that everyone had moved their chairs away from the place we were sitting. Jenn and I were alone.

I asked why everyone moved. I got the response that it was “misting.”

The day was clear. Few, if any, clouds in the sky. “Misting?”

Hmmm… that could only mean… NO…

“You mean the vat of shit up there was causing mist to fall over here? And you didn’t move my stuff?”

10:00 rolled around before we knew it. We got dressed up in our fire gear (no flammable clothes, baby) and got ready to roll. Jenn was set to light five four-inch shells (all tied together) right at the beginning, then I was set to light five five-inch shells (all tied together), then Greg and another guy would do the rest of the lighting while we watched for fires.

Jenn got the fusee (which is basically a road flare) and lit her fuse, then handed the fusee to me.

Let me explain “quick match” to you. Basically, quick match is a gunpowder coated string encased in a paper tube. Exposed (outside the tube) it burns kinda slow. Slow enough to watch it burn, at least. Once the flame reaches the paper tube, though, it burns at 60 feet per second. That’s damn fast - until you see it, it’s hard to explain how fast. Just imagine it’s instantaneous, because for all intents and purposes at the sub-foot length, it is.

She was supposed to get back once she lit it, but sort of watched the exposed end of the quick match burn until it burned back to the paper, at which point all five four-inch shells lit off and the concussion hit her.

This is a scary, scary thing, folks. It’s like a stick of dynamite going off in a hole in the ground right in front of you. It’s loud and firey and generally something that, if you’re not prepared for it, is freaky like nothing else.

Jenn scrambled backward to get away from the fireworks while I lit off mine. I handed the fusee to Greg, but, just like Jenn, I wasn’t quite prepared for the blast. Five five-inch shells is noticeably larger than five four-inch shells. It’s not something I can even really quantify, just suffice to say it’s like everything you imagine a war zone being.

I backed off, tripped over Jenn (who banged up her knee), and we both kept backing up until we were at a safe distance while Greg and Brad finished the show. Jenn and I did our job watching for fires (and watching the show) for the rest of the time.

After the show, we went around and made sure there were no live rounds left hanging out for little kids to come up and grab, picked up the garbage, and pulled the mortars out of the ground. We left after that and, after the long drive home, finally crawled in bed around 2:00a.

An exhausting day, to be sure, but there’s something about it that, once you’ve done it, you can’t not do it again. It’s all of the scariness and loud bang and fire of war with the safety of proper setup and equipment (and the knowledge that no one is actually shooting back at you). You smell the gunpowder smoke, you feel the impact, and you’re hooked.

We’ll definitely be back next year. Hopefully it won’t be at the sewage treatment plant.

« Once Again, The Praises Of Progressive
Validation And More: Getting ValidationSummary To Show On Events »