Average Joe != That Show With The Masks

What is it about developers that requires them to practice poor hygiene? I went to a Microsoft developer event and the sour body odor stink was nigh unto overwhelming. Besides that, I think it’s mandatory to have some sort of respiratory issue requiring you huff and puff like you’re working out the largest crap of your life.

This isn’t the first time I’ve noticed this phenomenon, and I think it’s high time someone did something about it. Maybe that’s why they hand out t-shirts - as a subtle hint to folks that they need to change clothes sometimes. If that’s the case, I suggest the hint is too subtle. Perhaps it’s time for “Microsoft soap-on-a-rope” or “Deodorant 2003.”

(My suspicions were confirmed on this point when I more closely investigated the tag on the shirt I got from the event. See for yourself.) 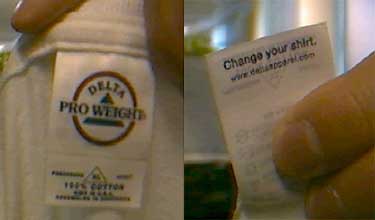 Oh, and I don’t claim to be a fashion guru, but I’m pretty sure the Hawaiian shirt, khaki pants, and Birkenstocks-with-no-socks combo does not fall under “haute couture.” (There were two of those there.)

I went to Mr. Bill’s Trivia again last night with Andrew and Susan and crew. Always a good time. Andrew laid off the beer a bit this time so he didn’t go shouting the answers to the questions for the world to hear, but Susan spilled her drink in her lap after getting worked up about one of the questions so I almost had to cut her off.

It was confirmed once again last night that Jenn and I think pretty much the same thought process entirely. It began with a conversation Andrew and I had about reality TV:

Andrew: Do you watch reality TV? Travis: Yeah, Survivor and sometimes American Idol. You? A: Both of those. Oh, and Average Joe. T: Is that the one where the guys wear the masks? A: No, it’s the one where the lady has to choose between a group of average guys and a group of models. T: Who’d she choose last season? A: The model. T: Of course she did. Was there ever any doubt?

Jenn: So you like reality TV? A: I watch a couple of shows. Average Joe… J: Is that the one where the guys wear the masks?

I think you see where that’s going.

I ended up eating way too much - a huge nacho, an order of cheese sticks, an order of potato skins, and three iced teas - and this morning I can still taste the potato skins. I really need to just cut back when I’m there.

Anyway, that was a good time. It’s always fun to hang out with those guys. Plus, Andrew finally won something at the trivia game ($1 off his meal), so his bad luck streak is broken.

Super Diamond is coming Saturday, March 13, to the Crystal Ballroom and both Jenn and I are thinking this group needs to go experience the Surreal Neil. Andrew’s firmly against it, which will make it all that much more fun. Doesn’t look like we have a hockey game that night (is the season over already?) so it’d be cool.

In entirely other news, it turns out Hasbro is releasing (or re-releasing?) the “original trilogy” line of Star Wars action figures. I never got a Millennium Falcon and I’ve always wanted one. I don’t know what I’d do with it, but I want it. Maybe I’ll have to get one now. 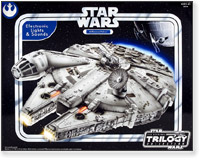 « Self-Tuning Guitars
Build Up My Hopes And Shatter My Dreams »