The latest Traffic Asshole isn’t even someone I found on the road… it’s someone next to the road, if you can believe that.

This happens every year, and I should have been expecting it, but somehow, just like every other year, it once again took me by surprise.

I was headed to work on Monday the first - the first work day back after the Thanksgiving holiday. At a normally fairly clear area, I noticed cars were jamming up all over the place.

With the density of the crowd, I started thinking, “I wonder if someone’s had a real wreck up there… Maybe someone’s dead. Of course, I’m gonna be pretty pissed off if there’s not someone dead up there, with this amount of traffic.”

Okay, so that’s a little mean and morbid. But true. If there’s not some life-threatening thing going on, what’s with the backup?

Behold, the Griswolds have arrived in Portland:

That’s right - every year the Shilo Inns headquarters puts up the largest lights display ever, and it’s right along the most difficult freeway in the Portland metro area. So I have Shilo to thank for the so-called Gawker’s Block in effect. Let’s see that again: 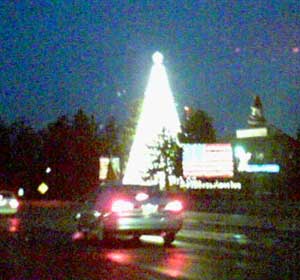 And the thing is, it doesn’t get any better as the holidays approach. You’d think after the first week all the regular commuters would have seen this thing and be ready to move on. But they always slow down. So Shilo Inns has, once again, fucked up traffic for an entire month. Good job, guys.

« Workin' In The Coal Mine
Class Action Rubbernecker Insurance »